Archive for the ‘Buses’ Category

Tiny Offerings are a Poignant and Disturbing Reminder of this Month`s (Sept. 2012) Tragic COIN LOCKER BABY Incident in Tsukuba 19 September, 2012 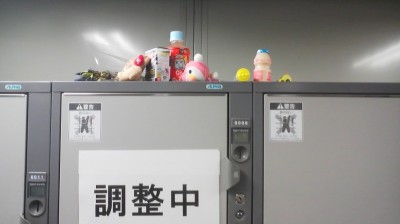 Candies, drinks and little toys have been left as offerings to console the spirit of a newborn infant left in a coin locker at the Tsukuba Center Bus Terminal

Those of us who frequently get around Tsukuba City using public transport, have often found shelter inside the Waiting Room at the Tsukuba Center Bus Terminal- especially in winters and summers and on rainy days. Despite being unattractive to the eye with its prefabricated structure, its air-conditioning system has brought comfort to those waiting for their buses or trains on the hottest and coldest days, while its two vending machines, loaded with hot and cold beverages have helped to do the same. On any day of the year it has always (well, since 2008, at least) been a place where you could get a load off your feet ( though its seats are few and not very comfortable).

As for me, I`ve had the habit of going into the waiting room just about every weekday- for a bit, at least-  sometimes more than once a day: for a drink, a ticket (you have to pass through the waiting room to get to the bus compay`s office), checking in with the lost and found (I`ve been leaving books on buses with greater frequency), or just checking out the people inside.

Unfortunately, those days are over. The Waiting Room is just not a place where I could feel comfortable anymore enjoying a leisurely rest, a brief read, or a soft drink. I don`t think you could either.

You see, while I was doing those things during the first part of the month, along with all the other users of the facility, unbeknowest to us- was a dead infant in one of the coin locker. 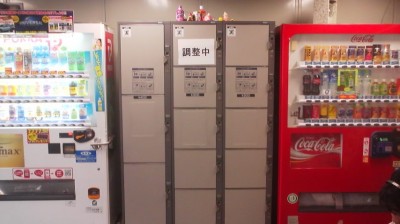 On the morning of September 8th, at about 10 AM,  the bus terminal cleaning staff detected a foul odor eminating from the lockers ( of which there are 13, in 3 vertical rows). The smell was a disturbing one, the type that we get a whiff of only a few times in our life ( hopefully) when we come across a long dead animal. With one whiff, the representative of the company who manages the locker knew that the police should be called in.

I do not envy the person who was unfortunate enough to have had the job of opening the suspiciously odiferous locker ( in the middle row at the top), for I am sure he will be shaken up for the rest of his days. He found, in a plastic shopping bag, a newborn baby girl, with umbilical cord still attached- long dead.

Checking the time expired on the lockers meter, it was detemined that the baby had been ut inside on September 2nd- six days earlier.

The police close off the Waiting Room with crime scene tape. Anyone having any business with the bus company for the next couple of days ( for example reserving or purchasing a ticket to Narita Airport) had to be done outside at a provisional booth which had to be set up. 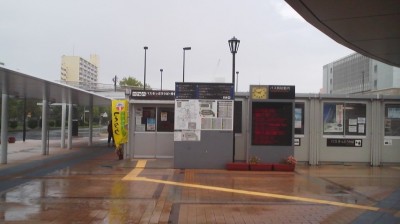 The police did not have such a very hard time finding the person who committed this disturbing act. They had images from a surveillance camera (or two), the shopping bag, and another clue which indicated the name of the hotel at which the infant had been delivered (by the mother- ALONE! How terrifying! I shudder when I remember the three harrowing times I stood by my wife`s side as she delivered, and cannot imagine having to go through that with no help at all!)

Within two days an arrest was made. A 30 year old woman from the Furuku neighborhood of Tsukuba- apparently the mother of the child. The only comment by her made available to the public in the press was: ` I couldn`t have taken care of a baby ” .

Like me, you might be asking yourself WHAT IN THE WORLD WAS SHE DOING? WHY PUT A BABY IN A COIN LOCKER?

Well, the fact is that putting babies into coin lockers at stations in a disitnctive form of Japanese child abandonment, with there having been several cases over the past 5 decades- with a particular boom in the 1970`s.

No one can say for sure why someone would do such a thing (besides insanity), but it seems as if there are some people who MISTAKENLY believe that these lockers are checked frequently and that babies will be kept safe and quickly found.

On the other hand, it could also be said that it was (in the days before omnipresent security camera) also a convenient way of anonymously getting rid of an unwanted infant (at some crowded, conveniently reached Tokyo Station) in a place less degrading than a garbage bin and with a guaranteed period of a few days  (or weeks) before the crime was discovered.

This particular case, decades after the coin locker baby boom of the 1970`s which was before the perpetrator was even born. How would she have even come up with the notion of such a thing?

One factor which might contributed to her actions is the fame of a novel by Ryu Murakami entitled Coin-Locker Babies in which the two protagonists had indeed been found in a coin locker after having been left there by there mother ( of course only a small percentage of Japanese have read this book or seen the film based on it but most are familiar with its title and maybe the basic premise of its story).

Anyway, as I have already said, like jumping in front of commuter trains to commit suicide, putting babies into coin-lockers is a distintively Japanese phenomenon ( though it occurs at a minutely lower rate than suicide by moving train).

If you enter the Waiting Room now you will probably be surprised to see that the coin-lockers have not been removed. The locker in which the infant had been in is covered with a white sheet of paper reading: CHO-SEI CHHU- (being adjusted), and on top of the it sit a small collection of offerings to the spirit of the dead child: drinks, candies, and a few little toys and trinkets.