Foreigners NOT WELCOMED in Minami Nagareyama! Non-Japanese are Stopped on the street, Questioned and Asked to Provide ID and Phone Number by Local Police 4 May, 2011 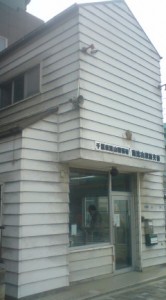 The KOBAN (police box) in front of the Minami Nagareyama Station

The policemen at the Minami-Nagareyama Koban ( police box) just outside the TX and Musashino-Line Stations do their best to give  directions, help people get their lost objects found, and most importantly, enforce the law and maintain order and peace.

It seems that there is one officer in particular stationed there who is especially vigilant- or should I say zealous- in carrying out his duty of serving and protecting the public. This veteran of the force, is also very alert and extremely sharp.

I realize this about him, since despite the fact that I am no taller than the average citizen of this country and was wearing a cap over my clean-shaven head ( which means no brown hairs), he was able to notice, in the second or two that it took me to pass by his quaint, white-washed office, that my nose and eyes were slightly different from those of the rest of the people around me.

That was enough to alert him to danger and set him into immediate action.

He approached me as I was standing in front of  the convenience store next to his koban. I was contemplating going in and getting something to drink- as soon as I had finished the piece of cheese bread ( my lunch) that I was munching on.

Assuming that I could not understand Japanese, he used the thumbs and forefingers of both hands ( despite the fact that he was holding a clipboard) to form a small rectangle (indicating an ID), and asked me to show him my Alien Registration Card, using the expression KA-DO misete kudasai ( Please show me your card).

I have to admit that I was caught a bit off-guard. Not only was this because I had never been confronted in this way before in Japan, but also because I was holding my cheese bread in one hand and my jacket in the other, while my mouth was full.

Nodding “SURE” with my head, and going into a fast-chew-quick swallow- mode, I flailed my arms in a flustered way trying to indicate that first I would have to get rid of my bread and put down my jacket.

He eyed me suspiciously, yet patiently and politely.

Fumbling for my wallet, swollen with unneeded receipts, myriad meishi ( name cards) and various membership cards, I shuffled through the lot trying to find my Alien Registration Card. I muttered an embarrassed yet polite chotto matte kudasai ( just a moment),while he responded with a sympathetic: “You`ve got a lot of cards there”.

With a feeling of relief I found what he wanted to see and handed it to him. And since everything was in order, I was confident that that would be it, after he had checked my status validity.

But that was NOT it. Instead of just handing me back my card, he started to write down my personal details on his clipboard.

Then he started questioning me. ” What are you doing around here?” Where are you going?” “What do you do for a living?”

If you (dear readers) had been looking at me, you would surely would not failed to have seen my jaw drop and eyes open in disbelief.

I thought about saying something sarcastic or refusing to answer, but KNEW that the best thing to do was cooperate. I have heard that it was possible that things could get much worse if the officer felt I was ressisting.

I told him why I was there. I had to be at Minami Koshigaya Station at 2, and the only way to get there using the TX Line would be to change trains at Minami Nagareyama. And since it was lunch time and I was early, I thought I could have a look around the neighborhood, one which I had never visited before. I also told him that I was going to Koshigaya to  record the narration for a DVD detailing a new neurosurgical technique, using a text which I had translated.

I took the original Japanese manuscript for this text out of my bag and showed it to him. He seemed very impressed with my Japanese ability, but that did not stop him from questioning me further, and writing down everything I said.

To top it all off, he asked me if I had a cell-phone. When I told him I did, he asked me to give him my number !

My eyes nearly popped out of my head in disbelief ! Still, I complied. When I finished giving him my number, though,I told him that he could check the number I gave him, by calling me from his cell phone, which to my amazement he did! So now I have his number,too!

When he was finished with his questions and seemed to be satisfied that I would not be a danger to the public ( at least for that moment), he told me that he thought all the foreigners had gone back home after the earthquake and nuclear accident ( so I guess he was disappointed- or perhaps excited!- to find one still in Japan). He also said that there were many bad foreigners in Japan ( but I thought he had said that all the foreigners were gone!), and that I should cooperate with the police.

When I asked him if all foreigners are checked and questioned at Minami Nagareyama, he proudly responded- “when I`m on duty, they are “!

Read more about what you should do ( cooperate!) if you are stopped for no reason by the Japanese police here:

And no. I will not be going back to Minami Nagaryama, any time very soon.