Archive for the ‘Where In Tsukuba’ Category 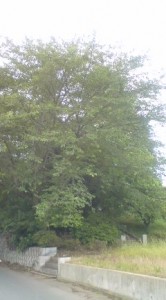 Tsukuba`s Sengen (千現) District is not only a conveniently located upscale residential neighborhood (within easy reach of both the TX rail and JR Highway Bus Stations), but it is also home to an internationally renowned research institute (NIMS) and a major facility for Japan`s Space Agency, JAXSA ( I should also mention the presence of the tastefully appointed  flower shop, Blomster Anna ). Thus, I guess it could be said that this makes SENGEN one of the more prestigious and sought after addresses in Tsukuba City. The other day, while walking through that part of town, I made a fascinating discovery which revealed how even in ages past , when the area that is now called SENGEN was  still mostly marshland,  it had been a coveted piece of real estate  which was vied for, and fought over by local residents, who at that time (The Edo Period 1600-1868) happened to belong to different clans . I got to know this , and plenty of other fascinating things as well, by stumbling upon a wooded hill (nothing more than a mound really), which I learned had  been dubbed – Tsukuba`s Mt. Fuji- atop of which stands a large slab upon which its tale has been inscribed. 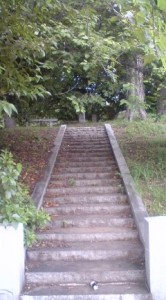 On a beautiful early summer day( one of the few on which it didn`t rain!), I was in the Ninomiya neighborhood of Tsukuba, and  had a couple of hours to spare before an appointment a few Kilometers away in Takezono (another of Tsukuba`s neighborhoods). Instead of taking the bus, as I would have done if I had been more pressed for time, I decided to stroll around Doho Park and try to catch a glimpse of  some of the kingfishers ( kawasemi) which can often be seen on the western edge of the park`s pond, and then walk to Takezono.

The pond at Doho Park , still thick with reeds and other marsh vegetation on its eastern edge, is a remnant of an extensive system of marshes and woods which once existed in the area upon which the Tsukuba Science City was eventually built. These marshlands ran pretty much on a North-South axis, with the Oto-Numa Marsh (which still exists) demarcating its southern limit, and the grounds of what is now KEK (The High Energy Physics Laboratory), which had once been a large marsh,  near the swamplands northern edge. We can still find reed filled ponds within the precincts of the Space Center, Sanso-Ken ( NIAS), The Meteorological Research Institute,  Matsumi Park, Tsukuba University, etc., and these are all aligned along the same axis (now sandwiched between Nishi-Odori and Higashi-Odori, major boulevards which run paralel to each other), and they are a testament to what Central Tsukuba was like in past ages. 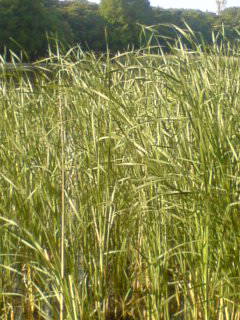 I walked around the Doho Park pond and then headed off towards Takezono. I passed through the Sengen neighborhood, dropped in at the flower shop, and then crossed Higashi-Odori (at the interesection near the Chin-Rai Ramen Shop) and entered into the Kurakake section of Tsukuba City, which has until now been relatively free of modern development. After 50 meters or so down the road, just passed a graveyard, there was a little hill, crowned by a big, old cherry (sakura) tree. If I had been in a car or on bicycle, I probably would have just kept going (as I had done so many times before on this road) and not found anything. But as I was on foot, I noticed a staircase, just barely visible from the road, which led up the hill. I then proceeded to scamper up the 23 steps to the top. 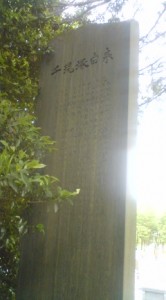 There, the land had been flattened out creating a tiny hilltop plateau. Directly in front of me, in the shadow of the big cherry tree, stood two low, squat, stone monuments, one of quite recent make, and the other, so old that it had been severely eroded after years (centuries?) of exposure to the elements. On the newer stone, inscribed with perfect clarity, were the characters reading: FUJISAN (MT. Fuji). A careful examination of the older stone revealed (after finding the angle at which the light hit the stones surface in just the right way), the same characters. 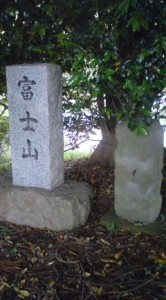 And if you are thinking about climbing the real Mt Fuji (which is closed this year due to the virus), but are PUT OFF by all the effort and SUFFERING that it would involve, you might want to consider conquering Tsukuba`s little Mt Fuji instead. You can do it in just 23 easy steps!