Archive for the ‘News’ Category

Fear and Suspicion Spread in the Tsukuba Area as “Foreign” Attackers Still at Large 15 July, 2020 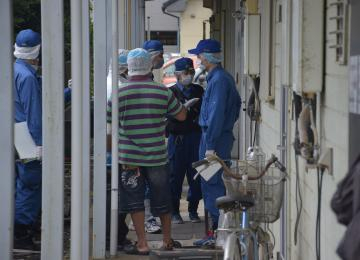 Police at the crime scene in Kamaniwa, Shimotsuma, where a Sri Lankan resident was attacked in his aprtment by several assailants armed with knives and a baseball bat (July 10,2020)

In the afternoon of July 10, a warning was sent out to all parents of nursery, kindergarten and school-age children in the Tsukuba area. Apparently there had been some sort of incident in Shimostuma (the city bordering Tsukuba to the north-west), and the criminals were still at large. Special precautions should be taken. That`s what the message said. Naturally, there was concern, and with nerves already frayed from months of living with corona-virus fears, there was some outright panic. And since the criminals are still at large on July 15th, Tsukuba (and surrounding area) schools are still implementing special precautionary measures. The fact that the fugitives have been reported to be foreigners (and that is the only description given of them) has naturally intensified xenophobia and suspicion of foreigners living in or passing through the area.

At about 4 in the morning on July 10th, a 45 year-old Sri Lankan man, a company employee and resident of Shimotsuma, was attacked at his apartment in the Kamaniwa neighborhood (on the eastern bank of the Kinu River) by four or five men armed with knives and baseball bats. Somehow, though, the victim was able to get away with only minor injuries to the arm and head. He then pounded on the door of a Japanese neighbor who called an ambulance at 4:19 and was taken to a nearby hospital.

He told the police that his attackers spoke in Sinhalese, one of Sri Lanka`s national languages, so it is assumed that they are Sri Lankan nationals. The police have announced that since no valuables were taken from the apartment and that the assailants had apparently brought the weapons with them, the case would be treated as one of attempted murder.

As you can imagine, social media in the area went into a frenzy. And since the only description given of the fugitives was that they were FOREIGNERS, it has made it uncomfortable for us non-Japanese (even more so than usual!) to be walking, cycling, or “hanging out” anywhere – even more so I`m sure for local residents who happen to hail from South Asia.

There were also many complaints regarding how long it took to issue the warning. People were asking why they were not informed about possibly armed fugitives running about until after their kids had already arrived at their schools.

They were probably thinking about how they would word their description!

What they finally ended up doing, though, was to have all the vigilant mothers in this part of Japan on the look-out for any dubious-looking foreigner – so be careful not to look too suspicious!

And of course, if you have any information that might help the police, please give them a call as soon as possible. 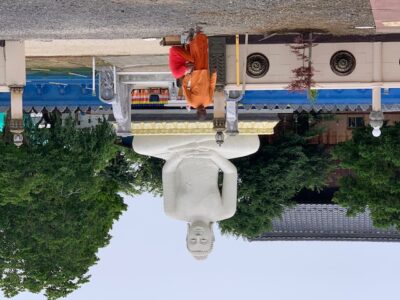 Sri Sambuddhaloka, a Sri Lankan Temple in the rustic village of  Tegomaru,  Tsukuba – a testament to the sizeable Sri Lankan community in the area. Coincidentally I discovered it (much to my surprise!) while cycling through the countryside two weeks ago. I found four or five monks living there, who said they catered to the spiritual needs of the local Sri Lankan community. They apparently hold monthly festivals on the nights of the full-moon and I hope to attend one some day.