Archive for the ‘Videos’ Category 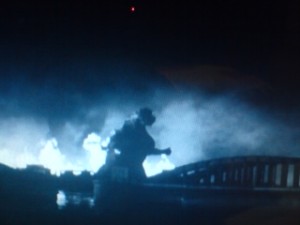 In the history of cinema, there have only been a few works which could be said  to have successfully captured the  particular spirit or mood of an age.

In my opinion, the Japanese film which  did this best was Akira Kurosawa`s 1950 masterpiece Rashomon. Made just after the Second world War, with Japan still in ruins and its people now living under a completely new ( and different)  system of government and thought ( the American occupation), the film perfectly tapped into the moral confusion of that time ( in the form of an investigation into a rape and murder in which each witness, including the spirit of the murder victim( ! ) recollects the event in a completely different way) and ends by suggesting that  the only thing to be done is to go on with life, to rebuild, and try raise a new generation.

Rashomon is truly a great cinematic work which not only perfectly captured the mood of the time, but did so with first rate cinematography, original music and acting ( though Toshiro Mifune`s shows himself to be one of the great HAM`s of movie history). If you havent seen it, please do! 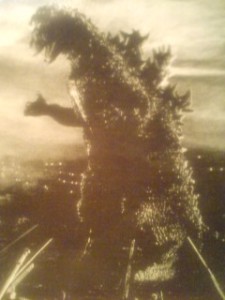 You might be surprised when you hear me say that another film which I believe successfully captured the spirit of an age was Ishiro Honda`s Godzilla ( GOJIRA) of 1954. Though this film featured a gigantic dinosaur-like creature which emerged from the sea and proceeded to destroy Tokyo ( by stomping, biting, swinging its powerfull tail and spewing out its intensly hot radioactive breath!), the film-makers created something more than a mere monster movie ( and monster HIT)- they powerfully expressed, on celluloid, the fears of the nuclear age (at that time the US was carrying out atomic tests at the Bikini Atoll which exposed some Japanese fisherman to radiation) and brought back the not too distant memories of the terror the Japanese experienced when their cities were  attacked by other unstoppable and incredibly powerful forces- the US military.

It is understandable in this light that the film struck a deep chord with the Japanese at that time. More interesting though, is the fact that the film became a huge international hit, or even something more than that-  a film icon, and even a SYMBOL OF JAPAN.

At least I could say that this was certainly true for those American boys, who like me, grew up sometime in the last quarter of the 20th century, when the Godzilla films ( yes, a whole slew of sequels was eventually made!) were a staple feature of Saturday morning TV in the US.

As little kids, we were enthralled by the mayhem, planes, trains, exotic actors, and of, course the dinosaur itself. Later, as we grew older, we revelled in the film`s CAMPINESS,  the b-grade dubbing work, and especially how the voices never even came close to matching the movement of the actors mouths.

No matter what its charisma was, Godzilla was so impressed in our psyches that when my friends at college heard that I would be going off to Japan, they nearly all made some references to Godzilla ( this was before the subsequent MANGA and ANIME boom in the US and Europe), and did their best imitations of the film- General! Godzilla is destroying Tokyo! 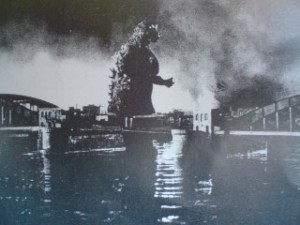 Naturally, we want to know everything about the films we love, including the sources which inspired the makers.

In the case of Kurosawa`s Rashomon, it is obvious that two very short stories ( Rashomon and Yabu no naka) by the Japanese writer Akutagawa Ryunosuke (1892-1927) were skillfully and senstively selected and adapted for the screenplay. 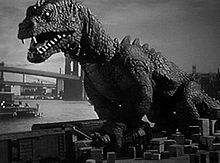 When it comes to the roots of Godzilla, writers in print and on-line usually point to the 1953 American film The  Beast From 20,000 Fathoms as being the inspiration for the Japanese monster. Apparently, the Japanese film-makers were first envisioning a gigantic octopus-like creature before they saw The Beast, which was a dinosaur brought  to life by nuclear tests in the Arctic. They decided to go with a dinosaur as well. And as is so often the case, the Japanese were able to improve upon what they imitate, and while Godzilla has become a household word in many parts of the world few have heard of , let alone seen, The Beast. This might be due not only to the more interestingly designed creaure and better music, but also to the REALISTIC PANIC evoked by actors and actresses who actually experienced similar massive attacks upon their cities by American bombers. ( For me, one of the most moving seens in Godzilla, and one which is revealing about Japanese religion, is of a mother, squatting on the ground, holding her to little kids closely to her as Godzilla, and death approach. She consoles her children by telling them: Soon we`ll be with daddy. Soon we`ll be where daddy is. Of course, we can assume that her husband had died in the war).

Another advantage the Japanese film had was the unique and catchy name the creature had. Compare: General, its Godzilla! with Oh, no! Its The Beast From 20, 000 Fathoms!

Anyway, I think that the link between The Beast and Godzilla is indesputable. The other day, however, I think I discovered an EVEN EARLIER SOURCE for the Godzilla character- what the Beast movie must surely have been based on- a short animated Superman film made by the Fleishman Brothers in 1942- ten years before the other films were made! 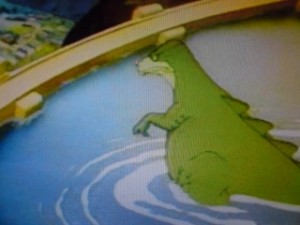 Over the past two years or so, Japanese bookstore have been selling boxed sets of old American cartoons. Tom and Jerry, Woody Woodpecker, Popeye, etc. When I saw a box containing the Fleishman Brothers Mr Bug Goes to Town, I looked at its back cover and saw that the set also contained a disc featuring 13 old Superman short films. For 900Yen, I knew I couldnt go wrong. 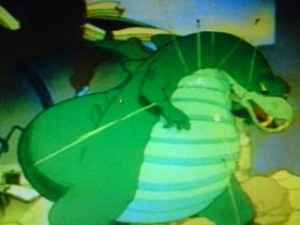 Anyway, to make a long story short. While watching the Superman films ( which were animated with surprising richness of color) I came upon what I believe to be the TRUE ROOTS of Godzilla and the model for the Beast From 20,000 Fathoms. I`m talking about the Arctic Giant of 1942, the fourth film on the disc.

First, the story is nearly the same as that of the Beast in that it features a dinosaur which had been lying frozen up in the Siberian Arctic. Since the superman film was made BEFORE the Atomic Age, however, the creature in that earlier film was not defrosted by nuclear tests, but by a broken freezer! The T-Rex like giant ( looking like a milder, softer, Godzilla) proceeded to terrorize new York, as did the Beast.

Have a look at the stills that Ive posted and see for yourself! The similaries are uncanny and unmistakeable.

And what makes me believe that the makers of Godzilla DID actually watch and study this film before making their own creature is THE VOICE, that half-organic half-inorganic bellow for which the Godzilla is so famous. If you watch the superman short, you will hear nearly the same sound as the creature bursts out of its glass tank! 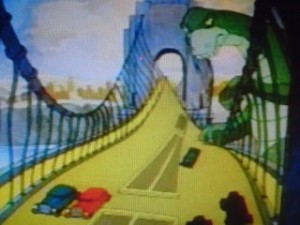 I dont mean to take anything away from the makers of either The Beast or Godzilla, as even Shakespeare took most of his stories and many of his scenes and characters from earlier sources. The makers of the later movies made their stories more significant by adding the nuclear angle. 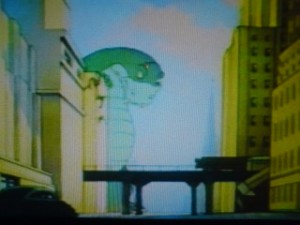 One thing iwould like, however, is that the Fleishman Brothers do get more recognition for hte impact that they had. I would strongly recommend checking out their works, as they are a match for anything that Disney or Miyazaki Hayao put out. 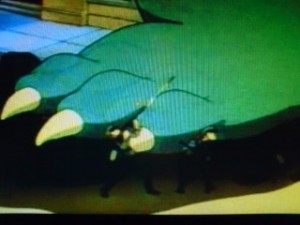 For more on the Beast:

Comments Off on Godzilla (1954) Roots Can Be Traced Back to Short Animated Superman Film- The Arctic Giant (1942)- Tsukublog Exclusive!