Archive for the ‘Movies’ Category

Remembering the 1886 Sinking of the Normanton (ノルマントン号事件)- in which the British Captain and European Crew Abandoned Ship, Leaving all Asian (including all 25 Japanese) Passengers to Drown 10 December, 2020 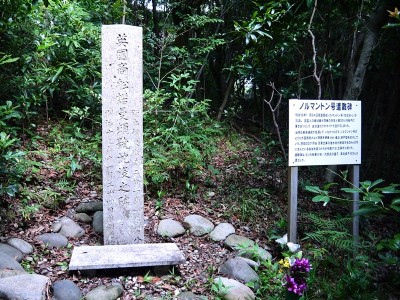 I am an atrocious typist. In fact the word TYPIST should not even be used when referring to a person with the poor keyboard skills that I have. It would probably be best just to say that when it comes to typing- I stink. You should not be surprised then, that when I took on the task of translating into English one of world-renowned author Junichi Saga`s still untranslated books*, that I did so with paper and pen.

Naturally, when I completed the English version, I  felt a sense of satisfaction and accomplishment, though all I actually had to show for all the work was a color-faded plastic shopping bag stuffed with hundreds of loose sheets of paper. Fortunately I had remembered to number (most of) them!

Making it all the more depressing, was the TV news I would often hear wafting in from the next room while I was at work. First there was the baffling disappearance of Malaysian Airlines Flight 370, and then the tragic sinking  of the Korean ferry Sewol, in which more than 300 high school students had gone down with the ship.

Making this disaster  even more painful for Koreans was the mishandling of what should have been a routine rescue effort – and even more so by the fact that the captain and crew had escaped the sinking ship, saving themselves while leaving the students to drown on the doomed ship.

Even when I was not at work typing, while I was out about town, it was the Sewol story which dominated conversation. No one could fathom how the captain and crew could have left those students on board telling them to stay where they were, while they themselves snuck off incognito (the captain in his underwear) to safety. 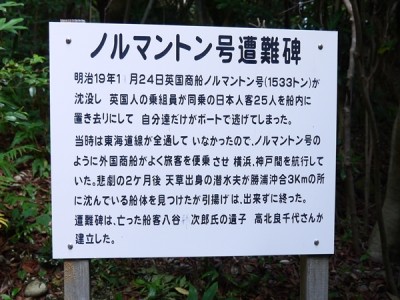 A sign next to the stone monument reads: The British freighter the Normanton (1533 tons) sank on January 24th 1886. Twenty-five Japanese were left on board to drown as the British crew used the lifeboats for themselves alone. Because the Tokkaido Railroad had still not been completed, at that time it was common for foreign freighters like the Normanton to carry passengers between Kobe and Yokohama. Two months after the tragedy, skin divers from the Amagusa Islands were able to locate the wreck, but it was not possible to salvage it or recover the bodies of the dead. This monument to the wreck was erected by the daughter of Yatani Jiro, one of the passengers who drowned when the ship went down

Then one night, right in the midst of all the unfolding of this and the continued debate about the behavior of the captain and crew, I came to a passage in my translation which I had completely forgotten about. My curiosity was peaked as I typed out these sentences I had translated months earlier:

* HYOSETSU NO BAIKAL (氷雪のバイカル) which can be literally translated as the “Frost and Snows of Baikal” is the true story of a Japanese family (the author`s own grandparents and father) that went off to live in Siberia just after the Russian Revolution. My English version was released under the title: “Susumu’s Saga”.

Just today (Dec. 12, 2020) I found an old Japanese film on youtube called: Masquerade – Secret of the M.S. Normanton Incident (仮面の舞踏ー秘話ノルマントン号事件) which was made in 1943 (in Japanese only – with no subtitles)