Archive for the ‘Events’ Category

With All The Attention On Cherry Blossoms and Hanami, HANA-MATSURI, The Japanese Celebration Of Buddha`s Birthday On April 8th, Is Often Overlooked These Days (revisited) 8 April, 2021 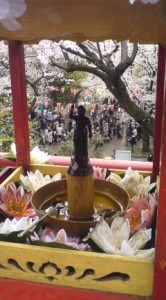 With cherry blossom revelry down in the valley below, worshippers pour tea (AMACHA) over a TANJO BUTSU – a special Buddha image with one hand pointing up and another one down, used for celebrating April 8th – Buddha`s birthday

Through a break in the cloud-like canopy of cherry blossoms at Ueno park, I spotted it, up above on a hill, at the edge of The Ueno Kiyomizu Temple`s elevated veranda. A small pavilion, bedecked with flowers- and inside a small image of the Buddha. Despite the excited, pulsating throngs of cherry blossom enthusiasts pushing  around me, I stopped for a moment to watch as someone took a dipper and poured a liquid over the little statue`s head. Then, in the middle of HANAMI, I remembered- HANA-MATSURI ! 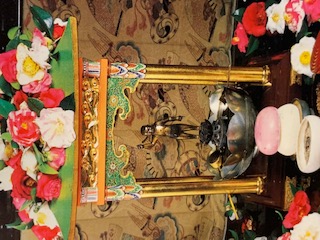 With all the excitement over the Sakura (cherry trees), it is easy to forget that early April, is the time to celebrate The Birth Of The Buddha. Traditionally, this was celebrated on the 8th day of the fourth month, according to the old lunar-solar calendar(which would usually  be sometime in May), but since Japan adopted the Western Calendar in 1873, it  has come to be observed about a month earlier, on April 8th (since the calendar changed April has become the 4th month in Japan). This has moved the Buddha`s Birthday celebrations smack into the middle of the cherry blossom season (giving it some very stiff competition for attention), and that is probably why the name of the ceremony was changed as well-  from the traditional Kanbutsu- e (潅仏会) , or Bussho-e (仏生会), to Hana-Matsuri(花祭り), which literally means THE FLOWER FESTIVAL. Another reason for the name change at that time, was that during the Meiji Period (1868-1912) with its revived nationalism, Buddhism, with its non-Japanese origins had come under attack, and the new name gave the festival a little more of a pure  JAPANESE ring (since HANA in fact refers specifically to cherry blossoms, the symbol of Japan and The Japanese Spirit). 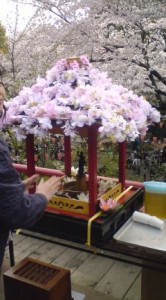 So in this season, at many temples across Japan ( and of course, in Tsukuba as well), you will find small pavilion or gazebo-like structures set up in clear view. These are called HANA-MI-DO (花御堂), and they are usually heavily decorated with colorful flowers. The small Buddha ( O-Shaka-Sama, or Shaka-釈迦, in Japanese) figures, used for this occasion are distinctive. It represents the Buddha at birth, standing upright, one hand pointing to the sky and the other to the ground, and is called a Tanjo-Butsu (誕生仏).

This specific pose is based on one particular legend related to the Buddha`s birth, in Lumbini, which tells of how when he was just born, he took seven steps, pointed simultaneously to heaven and earth, and declared- TENJO TENGA YUI GA DOKUSON- 天上天下唯我独尊- (I alone rule Heaven and Earth!)

It is then said, according to the same story, that a heavenly dragon , in celebration of the birth, made it rain sweet, fragrant water and flowers. That is why it is the custom, to this day, to cover the small pavilion with flowers and to pour AMACHA (literally sweet tea ) over the Tanjo-Bustu Statue, usually three times. 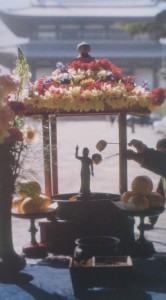 There are records showing that in Japan this custom dates back to at least the time of  Empress Suiko (592-628), but it probably began much earlier still.

Before the Second World War, the Hana-Matsuri was a major event in the villages around which The Tsukuba Science City was eventually built. In old Sakura Mura, there were festivities held for a week, with the local youth organization (Seinen-Kai) playing traditional flutes and drums late into the night. Children would gather all types of flowers, in bundles, to be placed on, in and around the Hana-Mi-Do. This year only a handful of temples in Tsukuba will be holding quiet services( though most will have their Birth-Buddha pavilions on display, with amacha available for anyone who would like to commemorate Shaka-Sama`s birthday.

In the past, April 8th, was also a day of compassion, and farmers refrained from work as it might involve the killing of insects or animals. 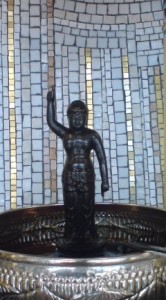 These days The Hana-Matsuri, a kind of Buddhist Christmas, has been all but forgotten by the general public. If you have time. you might want to drop by your local temple tomorrow and pour some AMACHA over the Birth-Buddha`s  head. If you like you can drink some of the tea, as well, though I can tell you from experience, it is not very tasty.