Archive for the ‘Art’ Category

Fragrance- an EYE-OPENING Exhibition at The University Art Museum, Tokyo University of the Arts -in Ueno- (Sorry- already finished!) 28 March, 2021 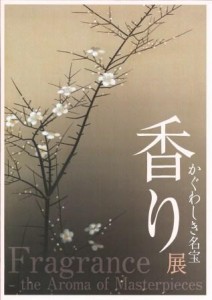 While the traditional arts of the Tea Ceremony ( Sadoh,茶道) and Ikebana (flower arrangement), are well known in Japan (and abroad) and have millions of practitioners, Koh-doh (香道)- the Way of Incense, which developed  together with  these other arts during the Muromachi Period (1336-1573), has fallen into obscurity. In fact, though I have lived in Japan for many years and have been an enthusiastic student of traditional Japanese culture, I had never been to an incense party. Nor had I ever even heard or read very much about such events.

That is why when I saw the poster advertising the exhibition: Fragrance – the Aroma of Masterpieces,  at the University Art Museum at Geidai, Japan`s most prestigious university for students of the arts, I knew that I would have to go check it out.

Of course, I had hoped ( and expected) that I would be able to experience ( with my own nose), some of Japan`s famously refined incenses, and maybe even sit in on an incense party.

And though unfortunately it turned out that besides being able to sniff a sandalwood log, and two other disappointing fragrance sampling-boxes ( at which none of the  visitors seemed quite satisfied), there was no incense burned at the museum ( there was just a video of an incense party being shown in a small room), I still found the exhibit to be very EYE-OPENING. 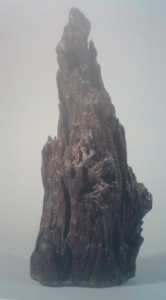 Though the ancient residents of the Japanese archipelago must surely have appreciated the rich fragrances of its abundant and varied trees and flowers, visitors to the exhibit are told that Japan`s unique and highly refined culture of fragrance only began with the introduction in the 6th century of Buddhism and the incense which was so important in its rituals.

Since the various types of fragrant woods used to make incense did not grow in Japan, they would subsequently, over the centuries, have to be imported, and were thus always highly valued and CHERISHED by the Japanese court, the nobility, and later by the ruling warrior class.

The first pieces that visitors encounter at the exhibit are ancient chunks of fragrant wood, beautiful in themselves as objets d`art, but even more interesting when reading of their historical significance. It is impressive to see the two pieces of rare Kyara wood which were at some point in the possession of ALL THREE of Japan`s great unifiers- Oda Nobunaga, Toyotomi Hideyoshi AND Tokugawa Ieyasu!

Apparently, some very old ( even at that time) and high quality pieces of fragrant wood were so highly esteemed, that when great generals ( for example, Hideyoshi) wanted to flaunt their power, they brazenly took them from the  temples where they had been watched over, and used them to make incense- for pleasure, and for protection ( it was believed that the smoke from these venerable wood pieces bestowed special powers upon their owners). 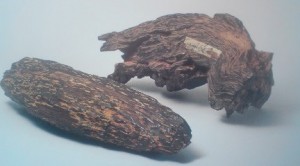 Another testament to the high status of fragrant wood is the fact that there is a legend ( which could be based on a true story) recorded in the Nihon Shoki ( the Ancient Chronicles of Japan) which tells of how fragrant woods were discovered in Japan in the year 595.It is written that fishermen scooped a strange piece of wood out of the sea, and noticed the amazing odor it gave off when they tossed it onto a fire. They immediately pulled it out of the flames and decided to present it as a gift to the Emperor. 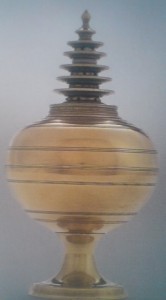 Since various ritual utensils were needed to carry out Buddhist ceremonies, craftsmen over the ages, had the opportunity to show 0ff their skill and imagination producing them. There are 3 basic types of incense holders- standing, hand-held, and hanging-  and there are many interesting examples on display at the exhibition, along with numerous Buddhist paintings which depict incense burning or related themes. 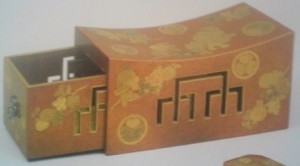 During the Heian Period, the zenith of classical Japanese court culture, the aristocrats enjoyed incense in a variety of ways including scenting hair and kimonos and incense games involving creating new scents and trying to guess the ingredients in scents created by other players.. Anyone who has read the Tale of Genji, surely remembers the passages describing the mixing, burning and enjoyment of incense. Classical Japanese style paintings depicting scenes from that novel are on display at the exhibit, as well the various utensils and other paraphernalia which were created for the enjoyment of incense- Lacquer incense sets, incense spewing pillows and special contraptions for scenting kimonos are also among the items that are being shown. Some of them are astoundingly beautiful.

An important thing that one learns at the exhibit, is that because the enjoyment of mixing incense became closely associated in the minds of the educated classes with The Tale of Genji, the Genji-Mon, 52 distinctive geometrical patterns which were originally developed and used to represent each chapter of the novel ( in the Edo Period), have often been used as motifs for  KODO  paraphernalia ( see the pillow above), and more importantly, as a way of representing  each of the various possible combinations of incense in incense games ( one game is actually called Genji-Ko (源氏香). 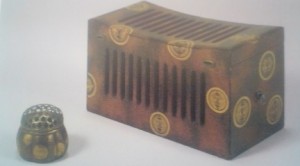 Another fragrant pillow- surely the cause of many an aristocratic stiff neck!

When Japan came to be ruled by the warrior class, beginning with the establishment of the Kamakura Shogunate, the custom of enjoying incense was taken up by the new elite- with gusto. I have already described how the greatest of the warlords coveted  famous pieces of fragrant wood.

It was during the rule of the Ashikaga Shoguns, however, during an era now called the Muromachi Period, that Japan`s unique way of enjoying incense- Kodo-, evolved. And as is usually the case in what is best in Japan- the highly refined Way of Incense developed as result of  an amalgamation of numerous distinct influences- the old aristocracy, the warrior class, the Buddhists ( especially of the Zen Sects), and even Europeans ( certain aspects of Catholic ritual were adopted into the Tea Ceremony, as well as into Kodo). 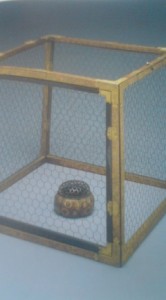 A complex system of rules was established for incense  gatherings, which like any of the other Japanese traditional arts was NOT merely a past-time and entertainment- but a road to self improvement and spiritual growth. It was also a way of slipping out of the mundane ( strife-torn) world, into a slower, richer, more elegant (SACRED even), time and space.

One thing that surprises me , however, is that unlike the other arts- tea, flower arrangement, Kodo often involved competition with winners and losers. The participants have to guess the ingredients used to make incense which is passed around in a special jar. 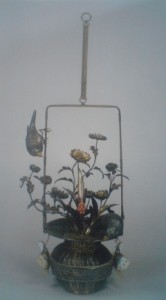 An incense burner from the Edo Period

The utensils and containers created for the incense parties were often of remarkable beauty – as can be seen at the Fragrance Exhibition.

Most interesting  for me ( and I believe for everyone else who visits this exhibition, as well) are the various score boards used for these incense smelling games. Horse races, sumo wrestling, and cock -fighting are some of the motifs used. 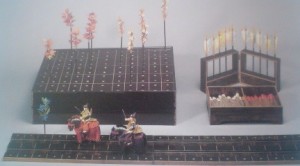 An incense game ( from the Edo Period) 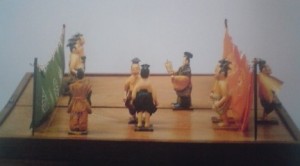 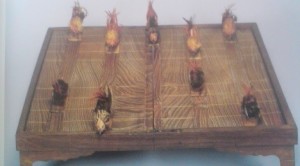 The remainder of the exhibition was a let down ( for me) compared with these fascinating pieces. It was a collection of Japanese paintings from various periods which the curators deemed as successfully evoking FRAGRANCE. Most of these were depictions of what have been considered representative (cliched) good smelling things in Japan- flowers, incense, and beautiful women.

It might have been that I was already all tired out by the first sections of the exhibit- but I could just not conjure up any fragrances from these paintings. 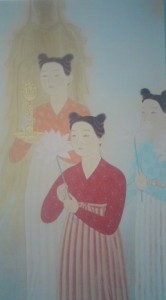 I was still, also expecting to be able to smell-sample some real incense at the museum, but as I have already said- this was not to be.

Anyway, even though my nostrils were not, my eyes were opened, and I learned about an aspect of Japanese culture that I had had no contact with before.

And oh! I was able to buy some incense at the gift shop- Sublime!

For specific details about visiting the exhibition, see the museums website:

And here are some videos available on line for those who would like to get a better idea of what Ko-do is like: