The To-joji Sutra Mounds (東城寺経塚群) and Other Buried Sutras Around Mt. Tsukuba (at the Tsuchiura History Museum thru May 5th) 1 May, 2021 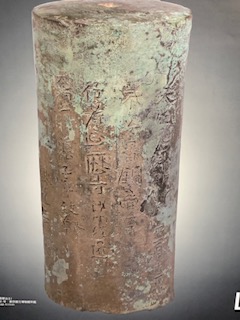 One of the six bronze sutra canisters found among the twelve “sutra mounds” excavated on the slope just above the To-joji Temple in what is now Niihari, Tsuchiura. The engraving indicates that it was dedicated on the 12th day of the Eleventh Month in the First Year of Tenji (1124 AD) during a time in which many Japanese Buddhists were concerned that they were living in the degenerate “Age of Mappo” (believed to have begun in 1052 AD). The sutras and other religious implements were buried (for safe-keeping) so that 5.67 billion years in the future (since the birth of the Buddha Gautama) when Maitreya Buddha (Miroku Bosatsu, in Japanese) appeared, the sutras would be there! 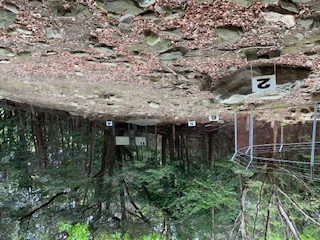 The site at which the 12 sutra mounds were discovered in 1890 ( by chance, as was the Mushazuka Tumulus, also in Niihari). An official excavation though, was not carried out till 1902. It is the oldest known Sutra Mound in Eastern Japan, and the first to be  studied by professionally trained archaeologists (under the direction of Senkichi Wada). Twenty other sutra mounds have been identified in Ibaraki Prefecture, including one in Hojo, Tsukuba. 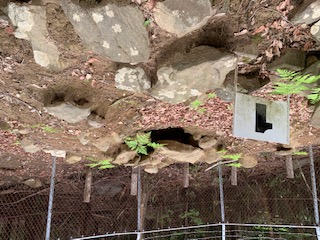 In July 1890, just above the old To-joji Temple, the only Buddhist temple on the once temple-covered mountain-range to have survived the anti-Buddhist rampages of the 1870’s, a laborer’s horse stepped on something unusual – a metalic canister. The laborer brought what had found to the owner of the land, Mr. Shinagawa Gonjuro, who had some men excavate the area – for a period of one month! All the items they found were send to the Imperial Museum (now the National Museum in Ueno). Ten years later an official study was carried out. 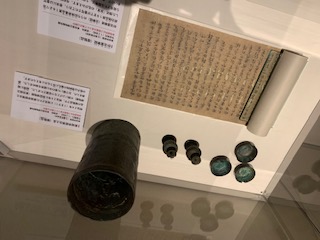 One of the six 12th century sutra-canisters discovered upslope of the To-joji Temple’s main-hall and the sutra scroll found inside it (The Lotus Sutra). On the upper left are some other Buddhist implements found buried together with this canister. 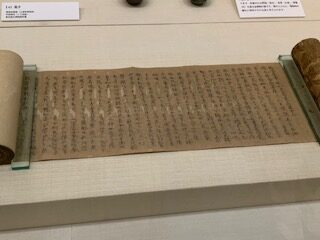 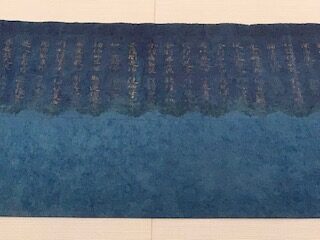 The Lotus Sutra  written out in gold by the hand  Fujiwara no Michinaga ( said to be the model for Murasaki Shikibu’s Shining Prince Genji of the Tale of Genji) in 998 AD and buried by him personally at Japan’s oldest extant Sutra Mound on Mt. Kinpusen, Yoshino, Nara Prefecture in 1007 AD – about 100 years before the sutras were buried above To-joji. (On exhibition at the Tsuchiura History Museum thru May 5th) 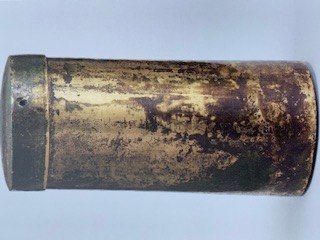 The gold/bronze canister in which Michinaga buried his handwritten sutra scroll (above) on Mt. Kinpusen in 1007 AD. 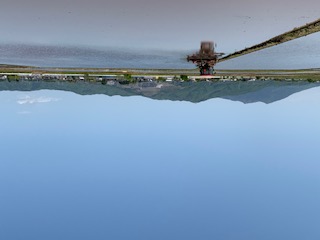 Mt. Tsukuba (far left) and the mountain range running out of it to the east. In the center of that range you can see a huge quarry. The To-joji Temple and the sutra mound are situated just to the right of that quarry, about halfway up. The whole range had in fact been long covered with temples – until the anti-Buddhist (HAIBUTSU KISHAKU) policies of the Meiji government (during the 1870’s) led to the elimination of them all, except for To-joji. 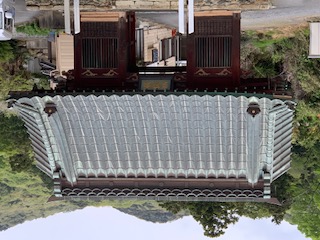 The gate at the bottom of the slope leading up to the To-joji Temple (originally called the Yakushi Temple because it’s main object of worship was a statue of Yakushi Nyorai (lost to fire). The name was changed to To-joji in 1722 by the ruling (at the time) Tsuchiya Family (of the Tsuchiura Domain). On the roof, you can see TOMOE emblems, Shinto symbols, remnant of the days when most temples and shrines blended together as one. 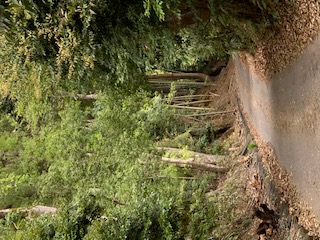 The road leading up to the temple 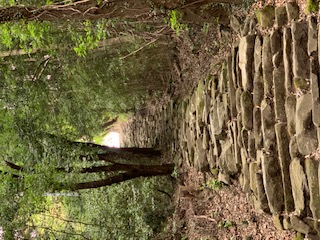 If you are walking you can take the steps! 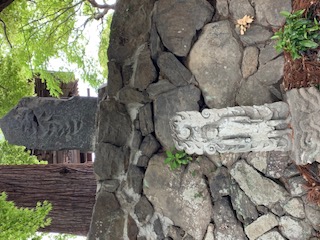 Just before reaching the temple compound you’ll be greeted by the Fudo Myoo! 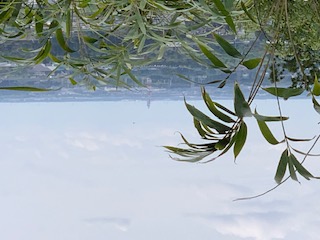 The view from To-joji – the Great Buddha of Ushiku is visible in the distance! The reason a Tendai Sect Temple (with a Hie Shrine) was established here was to create a sort of echo, or reflection of the great Tendai Temple complex on Mt. Hie (in Kyoto and Shiga Prefectures) which overlooks Lake Biwa (Japan’s largest lake). To-joji overlooks Lake Kasumigaura (Japan’s second largest lake!) and in fact, the name of the “mountain” on which the temple sits is CHO-BO-ZAN (朝望山)ーwhich can translate as The Mountain Overlooking the Realm 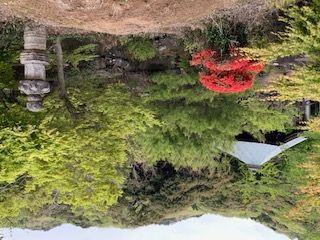 The To-joji Temple in Niihari, Tsuchiura, was established in the name of Emperor Kanmu by Saisen (最仙), a disciple of Saicho, in the year 796 AD as a Tendai Sect Temple. The Shingon Risshu  priest Ninsho stayed here and left his mark to this day with several unusual sacred stones (the rare Kekkai Ishi) 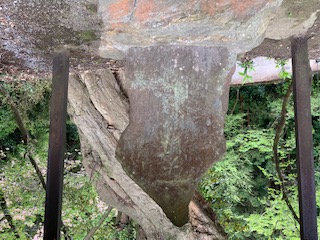 One of four 13th century Kekkai Ishi stones set up by order of the priest Ninsho to demarcate the sacred precincts of the area (forbidding the killing of living creatures, etc.) This one is dated 1253 AD. Besides being a stickler when it came to monastic discipline Ninsho (1217-1303), also stressed good works, social welfare and caring for the sick, the poor and the invalid, and one of the most interesting sights you encounter when hiking Mt. Hokkyo (just to the west of To-joji, on Mt. Hokkyo) is the YU JIZO, a large statue a Jizo said to have been erected to bring solace to those suffering from leprosy. 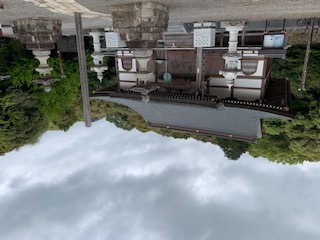 This is a relatively recent reconstruction (2004) of the Main Hall, the previous one was burned down by arsonists in 1997. Instead of the original Yakushi Nyorai statue, the current main objects of worship are a Yakushi Triad (Yakushi Sanzon Zo) 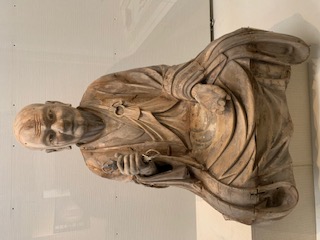 A wooden portrait of Ko-chi Shonin (広智上人) who succeeded Saisen as Abbot of the temple and who establish the Hie Shrine at the foot of the mountain. This scu;pture was made sometime in the Kamakura Period (1185-1333) but was repaired (according inscriptions) in 1298. 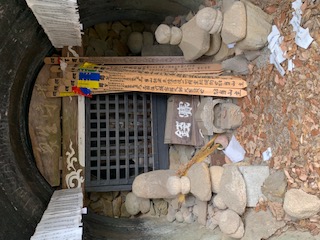 Behind the Main Hall , hewn into a the mountainside is a burial cave in which the bodies of warrior monks (so-hei, 僧兵), killed by Oda Nobunaga’s allies (the Satake’s), are interred. This is another interesting connection between this temple, and the much more famous Enryaku-ji on Mt. Hiei (which Nobunaga’s forces destroyed in 1571, massacring countless monks and warrior monks in the process). 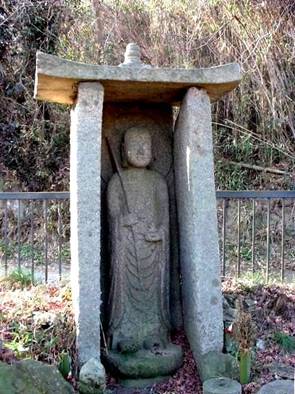 The so-called YU JIZO which stands along one of the hiking paths on Mt . Hokkyo (located in Oda Tsukuba, just to the west of To-joji, on the other side of the quarry). While the present-day sign-board states only that it was worshiped by women praying for easy-childbirth, it was in fact connected to the Ritsu Sect (propagated in this area by the great priest Ninsho (1217-1303) in the Kamakura Period) and the caring for patients suffering from leprosy. 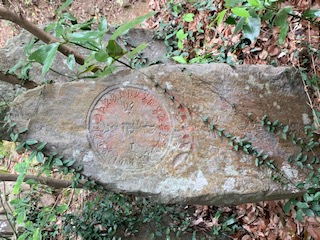 Another rare sacred stone. a Kohmyo Shingon Hyakumanhen Kuyoh toh (光明真言百万遍供養塔） – dated 1787, on the path leading up towards the sutra mound. This monument commemorates the chanting of the Komyo Shingon Mantra one million times! 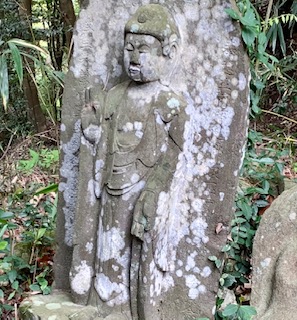 And near it is this beautifully carved rendering of Amida Nyorai dated 1685. 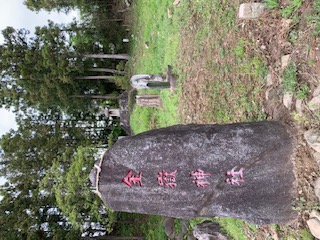 There is an interesting shrine at the base of the mountain – just off the main road (Rt. 53) – The Kontake Shrine (金嶽神社). It was established in 1574 by a retainer of the Lord of Oda Castle to enshrine Zao Gongen (of Mt. Kinpusen in Yoshino, Nara Prefecture) – where the first sutra mound – the one mentioned was discovered! 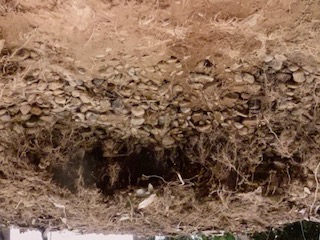 Doing some construction work on a slope in Kidamari, Tsuchiura in 2015, some workmen came upon this pile of buried stones – most of them with writing on them. 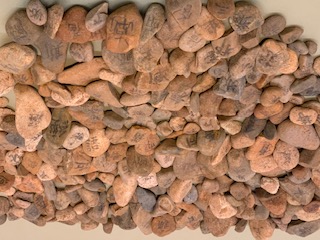 Stones from the Kidamari, Tsuchiura, excavation marked with characters from the Lotus Sutra (18th century). Though this is also considered a “sutra mound” (kyo-zuka,経塚) it reflects a completely different concept.  In the Edo Period (1600-1867) stones such as these with one or more characters from a sutra inscribed on them in black ink, not to preserve them for the arrival of Miroku Bosatsu, but as a prayer for salvation, repose for the souls of the dead, worldly gain – or for the good of the world in general. I have written more about the concept of the “power of the letters themselves” here. 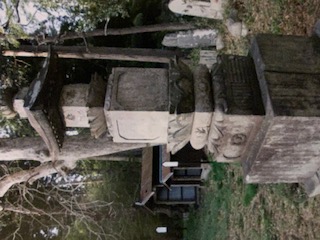 When this stone monument in Koyamazaki Machi, Tsuchiura was knocked over by the Great Earthquake of 2010, a sutra that had been stored inside it was discovered. I had been copied out in 1747. 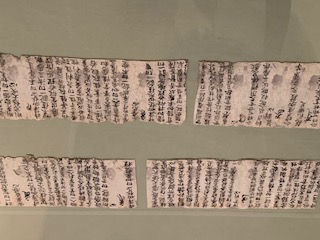 The sutra discovered inside the stone monument in Koyamazaki Machi, Tsuchiura. 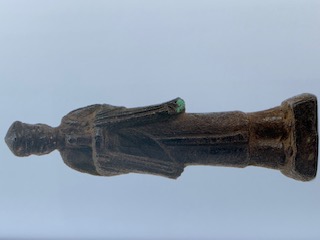 This Heian Period bronze figurine was also discovered near the sutra mound site – by a local farmer out gathering firewood and mushrooms. He took it home and placed it on his Buddhist altar. After his death his family donated it (returned it) to To-joji. No one is sure exactly what it is – but it appears to be more of a Shinto nature than a Buddhist one. 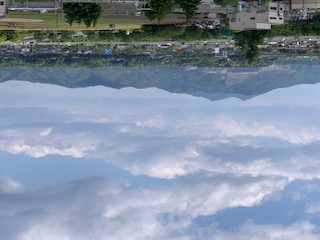 Another look at the low mountain range that runs to the east out of Mt. Tsukuba (which can be seen looming up beihind). The sand colored area is the quarry, and To-joji is just to the right of it, halfway up the mountain. Until the Meiji Restoration and the Anti-Buddhist policies, the range was covered with temples and was a major center for the practice of SHUGENDO syncretic Buddhism.