Weeping Willows Exemplars Of Spring Greenery and Demarcators Of Boundaries Between Realms 1 April, 2021 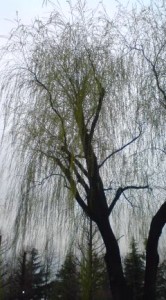 The avenues and water-banks of Chang`an, the great capital of Tang China (618-907) were often lined with willows (yanagi 柳, in Japanese), as these trees were believed to represent  rejuvenative life forces and have the ability to repel evil and bad fortune. One reason for this is that their slender and elegant branches MOVE WITH THE BREEZE more actively than the branches of most other trees, thus connecting them with the bright and positive Yang (as opposed to the dark and negative Ying). This notion was reinforced by the light color of the willows wood , its bearing leaves earlier than other trees in the spring, and the fact that it was believed to be an antidote for scorpion stings. For New Year`s, the residents of The Tang capital would hang a willow branch above their homes` entranceways to keep bad energies out. The wispy, misty green which seemed to float above  the streets of the old capital in late March and early April as the willow`s leaves sprouted forth also came to epitomize SPRING`S GREENERY, as exemplified by  Su Tung-po`s poem-turned-adage – Naturally Willows Are Green (柳緑, in Chinese), and Flowers Are Red (花紅). 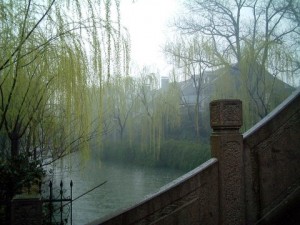 Since the Japanese Imperial Family and the aristocrats of the Nara and early Heian Period  courts were enamored with just about everything Tang, it is not surprising that the streets and watersides of the then new capital of the Yamato Realm, Heian-Kyo (today`s Kyoto), which took Chang`an as its model, were also lined with imported willows. In Japan, too, the wood of the willow was used to dispel bad energies and ALSO as an antenna to attract the Gods. This is best exemplified by the special chopsticks used during the New Years Holiday(yanagibashi 柳箸), which are made of the willows lightly hued wood and are narrowed at both ends (so that the gods can enjoy New Year`s dishes with you!).The Japanese, like the Tang Chinese, also decorated their homes with a willow branch, to attract the Toshigami-Sama- The God of the New Year. The delicate green of the willows fresh leaves, were also thought to be the perfect match for the pink cherry blossoms which adorned the old capital in April. In the kokinshu anthology of ancient poems  there is the tanka by  Sosei （素性） which goes- MIWATASEBA YANAGI SAKURA O KOKIMAZETE MIYAKO ZO HARU NO NISHIKI NARIKERU- (which I translate as) Looking out over the capital, the willows leaves and cherry blossoms blend to make a veritable spring brocade.

The pairing of the two trees was also logical from a Ying Yang point of view, as the Yin blossoms are balanced out by the Yang of  the willows. 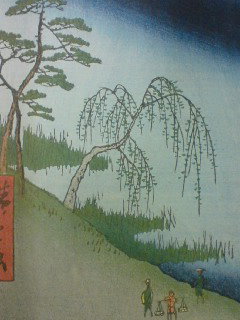 As willows spread throughout the Japanese Archipelago (there are about 300 varieties including 15 in Ibaraki),they were not only utilized as roadside trees, separating the stable, solid parts of the city from the fluid lanes of traffic, but came to be used to demarcate boundaries. They were planted at the entrance ways to towns and villages, at the waterline along rivers and ponds (separating the terrestrial from the aquatic), around palace and castle moats( separating the common from the great) and at the gates to the old pleasure quarters (yu-kaku). It was also believed that willows marked the boundary between the mortal world and the realm of spirits. Japanese Ghosts are said to often appear under weeping willows (no doubt because of the way they rustle and move in the breeze which can be extremely creepy at night!). 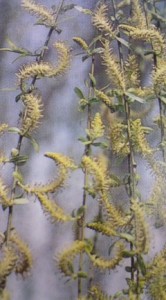 A Willow In Bloom

For me, it was surprising when I first learned that weeping willows have flowers (or more precisely catkins) which bloom in late March and early April. Willows are either male or female  and the catkins of each sex are slightly different. If  you get up close to a willow, have a look. They can still  usually to be found by ponds (i.e. at Doho Park in Tsukuba), along rivers or .at the entrance to small bridges (like the foot bridge over the pond at Tsukuba`s botanical garden). 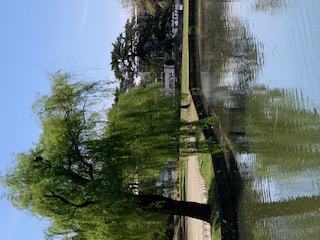 A willow beside the moat of the old Tsuchiura Castle (Kijo) 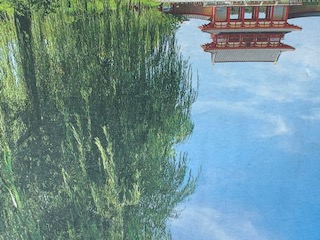