See the “Handkerchief Tree” (Davidia involucrata) Flutter Like White Doves in the Breeze – at the Tsukuba Botanical Garden 18 April, 2021 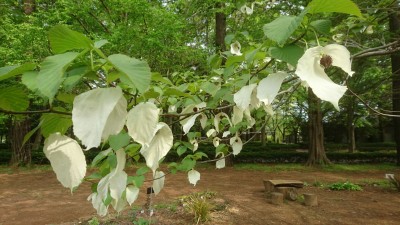 Davidia involucrata is named after the man who “discovered” it, and introduced it to the west – the great naturalist (and Catholic missionary in China) Armand David (1826-1900) – who also gave Europe knowledge of the giant panda and Pere David`s deer – along with 63 previously unknown species of animal, 65 previously undescribed species of bird and numerous plants that have never been classified before

With the whole town bursting in spring colors – flowers and blossoms and fresh greenery – azalea, iris, dogwood and all the rest whose name don`t come to  mind at the moment, going to the Botanical Garden might sound like a redundant thing to do.

But as I`ve told you time and again, the BG for me is a kind of “sacred space” where I can clear my mind and keep in tune with all the subtle changes that take place week by week in our natural world

Or maybe its just the fact that I like to take advantage of my Annual Pass – one of the best bargains in Tsukuba at a thousand yen for a year`s worth of admissions ( a single entry would usually be 300 yen!)

Anyway, I had about 30 minutes of time open in a very hectic schedule yesterday- and decided to spend it there. 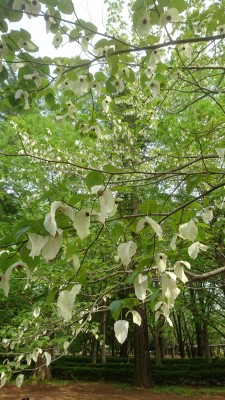 Davidia involucrata (HANKACHI NO KI, in Japanese) is known in English as the handkerchief tree, the ghost tree, or the dove tree – all names that reflect the presence of its large flappy, white petals that flutter daintily in the spring breeze.

After showing my pass at the entrance hall, it didn`t take long for me to feel satisfied in the fact that I had made the right choice in going there. About 30 meters down the path, my eye was attracted by a mass of fluttering – as if a flock of doves were taking flight. Letting my tired eyes focus, though, I saw that there were no birds at all out there – it was just the bracts of a handkerchief tree fluttering in the breeze! 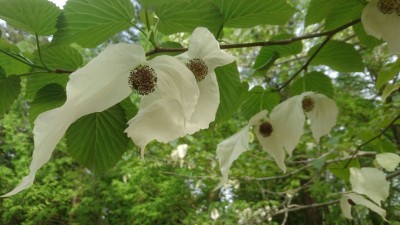 A closer look at the handkerchief tree flowers. The white petal-like elements are not actually petals – they are BRACTS – which is a kind of leaf that in this case functions as a petal.

And it is not only the fluttering bracts (quite eerie at night!) that make these trees interesting – they also have an exciting history. Though they apparently once grew around the world – since fossils of this species have been found in Alberta Canada – they had been completely unknown to the West (and to the East, as well) until the indefatigable French naturalist and missionary Albert David found a single specimen at high altitude (2,000 meters) in China in the year 1869. He sent it back to Paris where it was declared a newly discovered species. 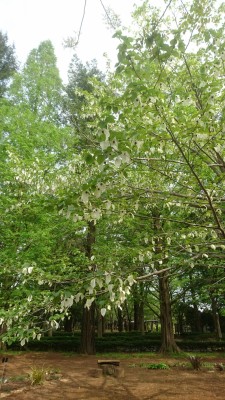 Another Brit, Ernest Henry Wilson (1876-1930) found an entire grove of handkerchief trees  growing out of a cliff in China. Besides managing to extract his specimens out of such a hard to get to spot – he was somehow able to keep his collection safe despite the fact on his way back home that his ship sank !

Thanks to these intrepid men these elegant trees are now found in parks and garden around the world – and I was able to spend a nice few minutes of “sacred time” contemplating it all….