The Pattern Formed By Old Foundation Stones Suggests that a Temple Modelled After the Great Phoenix Hall in Uji Once Stood In What Is Now Hojo, Tsukuba 30 April, 2021 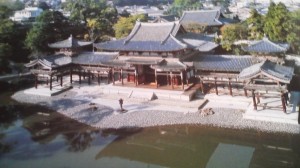 The magnificent Amida Hall at the Byodo-In Temple in Uji, Kyoto Prefecture – popularly known as the Phoenix Hall, is flanked on both sides by wing-like features which spread out and then bend towards the pond

The  Phoenix Hall of the Byodo-In Temple in Uji, Kyoto Prefecture, is one of the Japan`s more sublime works of architecture and design. It is also one of the most familiar – since its image is stamped on all the country`s 10-Yen coins ( while one of  the phoenix ornaments that adorns its roof- and is the source of its nickname- can be seen on the 10,000 Yen bill).

The city of Uji, prominently featured in what is considered by  many to be the world`s first novel – The Tale of Genji, and famous today for its high quality tea, was a favorite spot for the aristocracy to have their summer villas during the Heian Period (794-1185). This was not only because it was conveniently situated midway between the old capital Heian-Kyo (Kyoto) and the even older capital – Nara, but also because the breezes by the banks of the Uji River provided a cooler refuge from the stultifying summer heat of those two great cultural centers.

So it was only natural that in the year 998, the Minister of the Left, and one of the most important men of his era- FUJIWARA NO MICHINAGA- bought an old villa in Uji and had it restored. And though the great minister did spend his last years there in peaceful  seclusion devoted to religious contemplation, it was not until long after his death (in 1028), that a proper temple was built on the property by his son FUJIWARA NO YORIMICHI. What later came to be known as The Phoenix Hall was completed in 1053. Other buildings and landscape features were added later – and over the generations , in a temple compound called BYO-DO-IN (平等院) 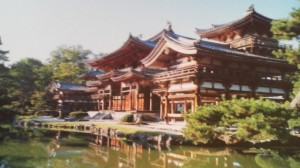 The Amida-Hall, of the Byodo-In Temple, more popularly known since the Edo Period as the Phoenix Hall (Ho-o-Do, 鳳凰堂)

The building, along with its surroundings and interior decor which continued to develop over the years, grew not only beautiful, but also to perfectly encapsulate the religious ideas that were popular among Japan`s aristocracy of the time ( and which would later take a great hold on the general population, as well)- the belief that  upon ones death, one would be saved ( be brought to the Western Paradise) if one had faith in the Buddha Amida ( who among other things, made a vow to save all those who trusted in him).

The most distinctive architectural features which help to accomplish this act of symbolic representation are the WING-LIKE appendages that project out of each side of the relatively small hall that contains the main Buddhist image ( a seated Amida), and then bend out forward. To someone who gazes at this structure from across the pond which lies in front of it, it appears as if the building is coming  forward, as if to gently embrace or even scoop up the viewer to be carried off to paradise ( it is for this bird-like quality – as well as the bronze birds on the buildings roof that the nickname Phoenix Hall was popularized in the Edo Period). At the same time, through an opening, one can see the seated golden Amida, as if floating serenely in the center it all.

If one enters the hall, one can see lining the walls, what for me are the most beautiful works of art in all of Japanese history – a set of heavenly musicians carved ever so elegantly in wood. Gazing at them can feel as if one has truly been lifted off to paradise. 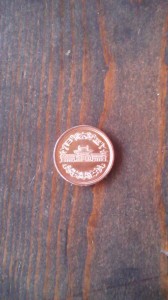 The Phoenix Hall of the Byodo-In Temple in Uji, Kyoto Prefecture is featured on Japan`s 10-Yen coin

Not long after the establishment of Byodo-In, in the same Heian Era, though far, far from the capital and from Uji – in what is now Hojo Town in Tsukuba City, it seems apparent that a temple was built which had been MODELLED AFTER the famous Phoenix Hall. Unfortunately, however, today only the foundation stones upon which its posts were set ( along with some roof tiles) remain for us to see. It is the pattern which these stones form- showing the same wing-like extensions as the Phoenix Hall, that seem to confirm that the faith in Amida and the architecture which represented this faith, had spread all the way to the foot of Mt Jo-Yama (129.4 m), just to the south of Mt Tsukuba.

In the late Heian Period, a fortress was built on this little mountain ( more of a hill, you could say)- the new home of the TAKI ( also pronounced TAKEH) FAMILY, a branch of the great TAIRA. The Taki`s had moved to their new fortification from their former stronghold the MIMORI JO CASTLE ( a few kilometers away on the other side of the Sakura River)- on the same vast lands which the family had received for helping suppress the rebellion of Taira no Masakado in the 10th century.

It seems likely that it was one of the Taki who built the temple- perhaps under the influence of their relatives living in capital at the time.

We cannot be sure, however, since there are no written records left providing any explanation of the buildings origins ( though the ruins do seem to indicate that whatever the building was, it it was destroyed by fire). The Taki Family was eventually wiped out after being wrongly accused of rising in rebellion after the establishment of the first Shogunate in Kamakura. 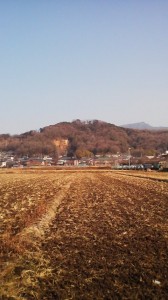 Jo-Yama ( Fortress Mountain), at a mere 129.4 meters in height, still blocks out the view of Mt Tsukuba ( seen at the top right) from the town of Hojo

No one had any idea that such an usual building had once existed at the foot of the old castle mountain until the year 1979 when a housing development was being constructed for town officials. Work was stopped when the foundation stones were discovered, and an excavation and survey were carried out over a period of two years.

Since the address of that particular spot in Hojo Town was HYUGA (日向), the ruin came to be known as the Former Hyuga Temple ( Hyuga Haiji Iseki, 日向廃寺遺跡).

The construction project was eventually re-started ( and what an eye-sore those buildings, the official apartments, continue to be!), though the most important part of the site has been left as an open plaza- used as a playground by local children ( the few of them that there are in this severely GRAYING town!). 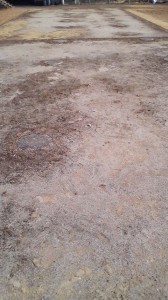 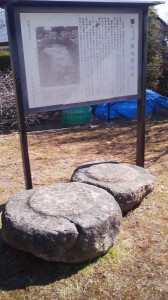 I am a regular visitor to the ruin- as I used to live not more than two hundred meters for them. In fact, every night I used to sit and contemplate the Jo-Yama mountain from the comfort of my bath ( though the little mountain completely blocks my view of Mt Tsukuba!) 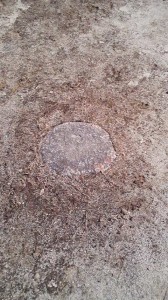 One of the foundation stones still set in the earth

Appropriately, the narrow road which runs East-West by the old temple ruin is lined ( on its North side) with temples and shrines. The Western-most of these – closest to the Western Paradise- is the Muryo-In- which belongs to the relatively rare Ji Shu Sect (時宗)- which emphasized faith in Amida ( by continuously chanting his name- and occasionally dancing ecstatically while doing so. The founder of this sect, Ippen Shonin, took the ideas of the Heian Aristocracy ( belief in the saving powers of Amida) and brought them to the PEOPLE- especially the poor. 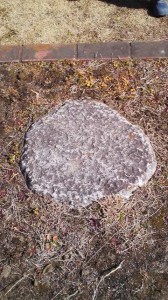 A closer look at one of the foundation stones

There ARE other example of old temples modelled after the Phoenix Hall in Uji- most notably in the North-Eastern Region of Honshu Island. And though this area lies much further away from Kyoto than does Tsukuba- this makes sense. It was an area in which the Fujiwara Family, the family which built the Phoenix Hall, took refuge centuries ago.

The Former Hyuga Temple is thus an important and RARE example of such a temple in the Kanto Area. Many a time I have tried to conjure up what it would have looked like as I sat in my bath, imagining a golden image- seemingly afloat- and the inviting wings spreading out before scooping me up in their embrace. 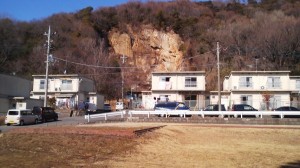 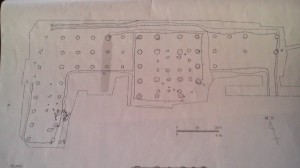