YUKI-YANAGI ( literally- Snowy Willows) Are Allowed to GROW OUT and Whiten Up the Town in Spring 24 March, 2021 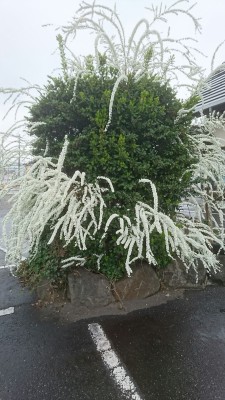 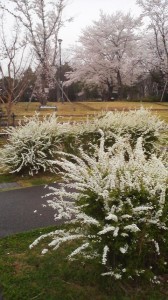 The Japanese are quite zealous about keeping their property free of weeds – and their hedges, bushes and trees well trimmed. Lots of free time is spent  caring for yards and gardens, with bushes often sculpted into beautiful forms, and millions of dollars spent  and plenty of people employed ( in Tsukuba City alone!) for public works projects keeping roadside and park vegetation well groomed. This is taken to the extreme when the city does its annual HATCHET JOB on it`s roadside trees, leaving them as veritably limbless trunks and creating, what looks to me, like a haunted landscapes ( though the branches and foliage DO grow back in after a while). 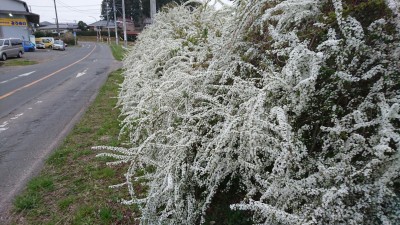 Giant yukiyanagi bush at
a bend in the road (Sasagi, Tsukuba)

There is at least one shrub, however, that is given licence to grow out freely- the YUKI-YANAGI (雪柳). This member of the rose family is  native to Japan and China has become an extremely popular ornamental plant ( just have a look around Tsukuba this week) and can be found along roads and paths, in parks, and in private gardens.

In spring it blooms with clusters of tiny, very white flowers which give the impression that they are covered with fresh snow. The only problem is that if the yukiyanagi shrub is trimmed it doesnt bloom well, but just looks scruffy and forlorn. To obtain it full effect it has to be let loose- and its branches do grow out long and lanky, like crazed dredlocks which sway actively in the breeze. 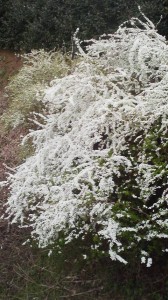 It is because of these long, slim, swaying branches and the pure which blossoms which bloom on them that the Japanese call this shrub the YUKI-YANAGI, which literally means: SNOWY WILLOWS. This is much more melifluous and appropriate I think than the various names in English which are used to refer to this plant ( according to the reference books I`ve checked ): Spiraea or Thunberg spiraea ( scientific name Spiraea thunbergii)

Since YUKI-YANAGI bloom in late March and early April they are often overlooked ( though they are blazing bright white just about everywhere)because of all the OOWING and AAHING over the cherry blossoms. They do, however, in fact, provide an interested contrast down lower to the ground, to the pink canopies the cherries form above. 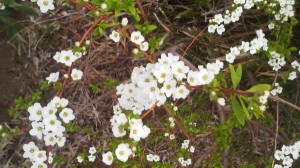 YUKI-YANAGI are not only pleasing to the eye (when they are in bloom),  they are also a symbol of spring and a haiku key-word (kigo) for that season.

I have found a few interesting poems which communicate this shrubs distinctive beauty. Here is one by the poet Igarashi Bansui ( 五十嵐播水) who lived from 1899 to 2000 ! : 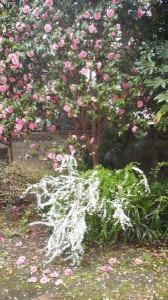 though in the morning glistening white

in the dark of dusk they seem more bright

And then there is this one:

which I render in English as: 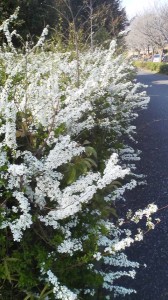 So if you have your own garden in Japan, make sure to make sure whether or not any of your shrubs is a YUKI YANAGI. If you do have any, remember- don`t trim- let your YUKI YANAGI grow out wild and crazy to blossom beautifully in spring. 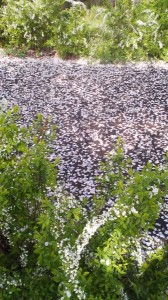