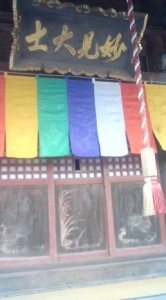 A close-up of the MYOKEN WORSHIP HALL at the Hokuto-Ji Temple in Kurihara Tsukuba. These five colors are associated with the Shingon Sect of Buddhism, the dominant religion in the Tsukuba area. 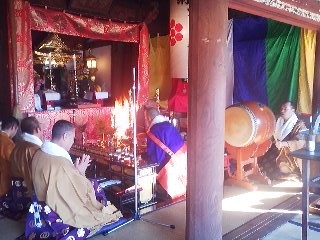 A Goma Taki ritual being carried out at the Main Hall of the Hokuto-Ji Temple in Kurihara, Tsukuba This fire ceremony, of Indian origin, was introduced to Japan by the great priest Kukai (Kobo Daishi) in the 9th century. This year`s Hoshi Matsuri is scheduled for Thursday February 18th 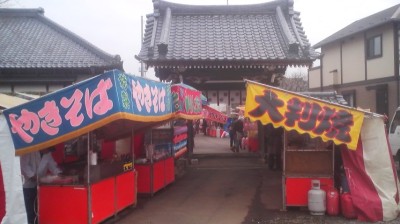 The festival vendors set up at the entrance to the Hokuto-Ji Temple in Kurihara, Tsukuba on the day of the festival

The ancients found significance in just about everything they saw in the world around them. But in the quest for gaining an understanding of the workings of FATE,  man has probably most frequently and consistently turned his eyes to the STARS and other HEAVENLY BODIES, whose positions and movements were often believed to be closely linked with what happened down here on terra firma. As certain civilizations became more developed, they were able to amass extremely detailed data, leading to the creation of sophisticated systems of astrology (which I guess could be said to be the foundation of modern astronomy). 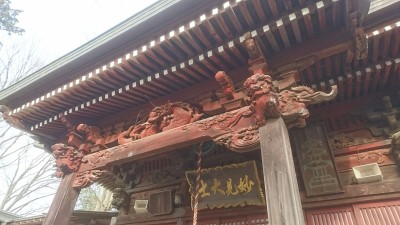 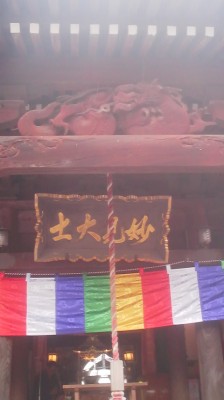 Another shot of the entrance to the Myoken Hall at Hokuto-Ji. The colorful banner is representative of the Shingon Sect and the carved dragon above protects (it is believed) the wooden structure from fire. 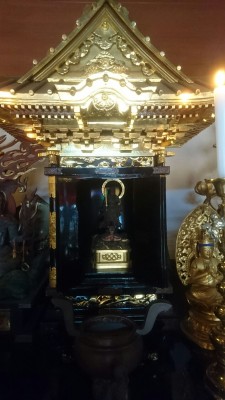 The main object of worship at the Hokuto-ji Temple in Kurihara – a statue of Myoken-sama, the deification of the northern star. He can be recognized by the fact that he is standing on a tortoise!

India and China were two such civilizations. Their complicated beliefs connected with the stars (some scholars believe these originated back in ancient Babylonia), were introduced to Japan along with Buddhism- especially the Esoteric Type (密教, Mikkyo)- of the Tendai (天台宗) and Shingon (真言宗) Sects. And since the Shingon Sect of Buddhism has long predominated in many of the hamlets which are now part of Tsukuba City, it is only natural that certain ceremonies related to star worship should still exist around here. Many DO find it surprising, however, to hear that the Hokuto-Ji Temple (北斗寺), in the rustic (and rusting) hamlet of KURIHARA (栗原), is the most important of Japan`s three great temples dedicated to the Pole Star and the Seven Stars of the Big Dipper(三大北斗)- in the form of the Deity MYOKEN-BOSATSU (妙見菩薩). In fact, when this temple, usually referred to by the locals as MYOKEN-SAMA, holds its STAR FESTIVAL (hoshi matsuri,星祭) on the seventh day of the first month according to the lunar calendar each year ( this year this falls on Wednesday February 18, 2021) devotees come from far and wide. 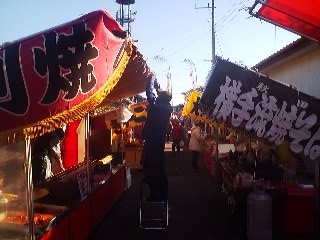 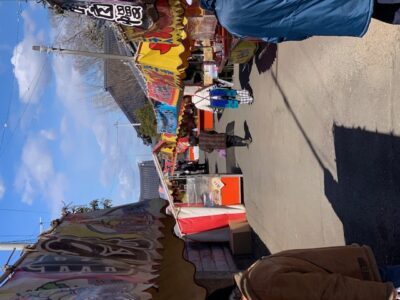 It was a much quieter than usual event in 2021 – with corona-virus restrictions in place – but still, the festival was on! 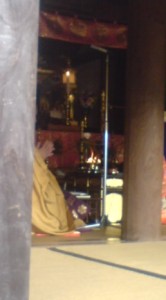 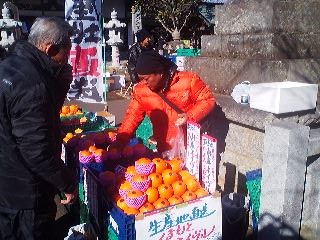 An orange vendor at the Hoshi Matsuri at Hokutoji in Kurihara

It is not difficult to imagine why the pole star , and the nearby constellation of the Big Dipper, would have gained such a prominent role in religions in which astrology was important. These are the MOST CONSTANT of the heavenly bodies, and to the long term observer on Earth, it would seem as if everything else in the sky was moving around them. For this reason they could even be seen as symbols of the Emperor himself (whether Chinese, or Japanese), around whom their respective societies were supposed to revolve. These stars were also crucial for navigation, and the Japanese priests who safely made the journey to and back from China must have felt they owed a debt of honor to them. 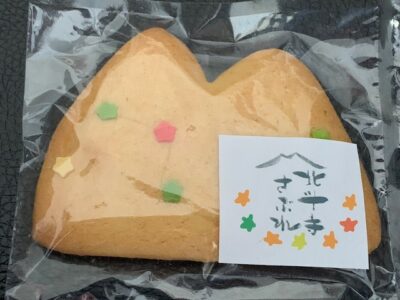 Cookies, specially-made and individually-wrapped for the festival – shaped like twin-peaked Mt. Tsukuba with little stars in the shape of the little-dipper! 100 yen each! 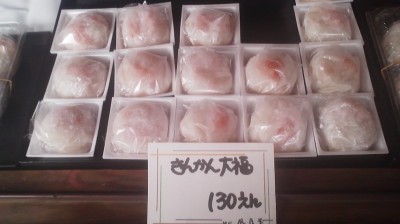 Sweet and sour- these dumplings contain a surprising filling- one whole stewed kumquat! 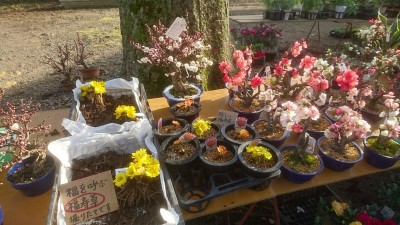 Auspicious plants for the new year – FUKUJU-SO (adonis) and plum blossoms, on sale at the festival

Praying to, or making offerings to the Pole Star were believed to be efficacious in keeping peace in the realm and in preventing disasters. During the Heian Period ceremonies related to the Pole Star were held for such purposes at certain major temples (ie. Mii-Dera, 三井寺 and Onjoji,  園城寺). The Imperial Court also held similar rites focusing on Myoken in the Hokutosai (北斗際) which was carried out by Yin-Yang diviners (Omyoshi). In the year 1153, the Retired Emperor Toba prayed to Myoken for relief from an eye ailment ( Myoken literally means Divine Sight). When a cure for the Retired-Emperor was in fact achieved, it became common-practice to pray to this deity when one suffered from eye trouble ( and interestingly, since the name Myoken could also be taken to mean – LOOK DIVINE, as in beautiful, many show business people have been devotees of this deity over the years). As you can imagine, sailors would also be great devotees of these stars which helped them find their ways. 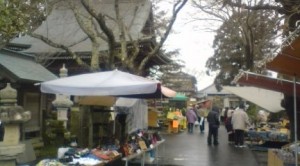 Vendors selling their rustic wares at the Hoshi Matsuri at the Hokuto-Ji Temple (北斗寺) in Kurihara, Tsukuba 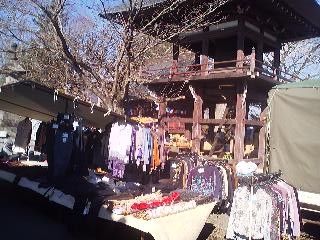 Under the bell tower- clothing for sale

During Japan`s middle ages Myoken became a popular Deity among the Samurai, as the Pole Star was believed to be crucial in determining the results of battle. Later, even the farmers and merchants got into the act, praying to the Pole Star for good harvests and success in business, respectively.

Also of great important to the history of Myoken Worship is the fact that the priest Nichiren, the founder of the Nichiren Sect of Buddhism, believed that he had been helped in times of need after praying to Myoken. Because of this, Myoken devotion was taken up with enthusiasm by members of that sect, and to this day, at Nichiren Temples, you will more than likely find a Myoken Hall within their precincts. 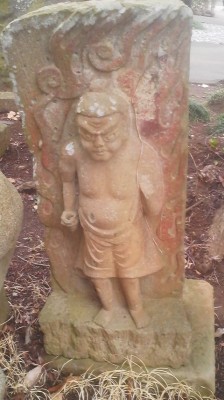 A sacred stone on the temple grounds

The subject of Myoken, however, is extremely complex, and it is not my intention here to give you any more than this brief ( and inadequate) explanation of the deity ( which after the Meiji Period`s forced separation of Buddhism and Shintoism was enshrined in Shinto Shrines  as the God Ame no Minakanushi no Mikoto 天御中主尊）. I would like instead to go onto a grief intoduction to Tsukuba`s Hokuto-Ji Temple and its Hoshi Matsuri. 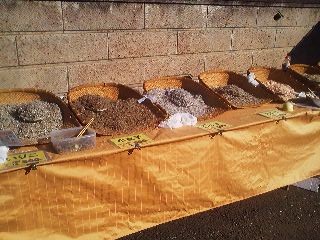 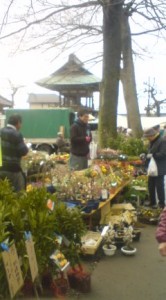 On the day of the Hoshi Matsuri Festival vendors sell flowers, trees, and bonsai

According to extant documents, the Hokuto-Ji Temple was founded in the year 810 by the priest Saisen (最仙) for the purpose of praying for the peace and prosperity of the nation through the pole star and the big dipper. Like with many other older temples, however, the history of Hokuto-Ji is quite complex, having moved location ( within the same general area) several times for various reasons, before returning to the hamlet of Kurihara and its ORIGINAL location in 1659. 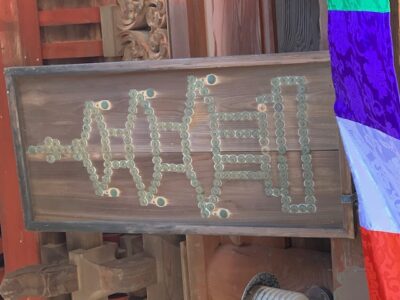 A three-tired pagoda motif created out of 5-yen coins 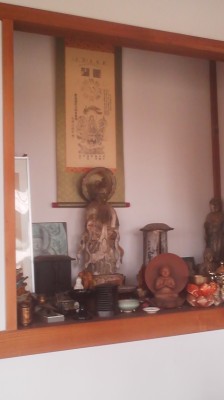 Some might be (very) surprised to hear that at that time, during the Edo Period ( 1600-1868), Kurihara, which sits by the Sakura River, and has good soil and water for rice production, was partly TENRYO (天領), that is, under direct control of the Shogun, and was ruled through the trusted Hatamoto Family- The Hori. One of the last of the Hori’s to rule Kurihara, played an important role in negotiations with European powers just before the Meiji Restoration ( this will be the subject of a future post) but committed ritual suicide (seppuku) when he was told that his idea of a bilateral treaty with Prussia was not what the Shogunate wanted. 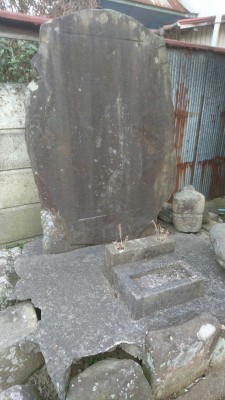 A stone monument along the main road through Kurihara memorializing the Hori Family, rulers of Kurihara through most of the Edo Period (while they themselves lived in Edo. The last of the Hori`s committed ritual suicide (seppuku) after his plan to build an alliance with Prussia was rejected by the Shogunate. 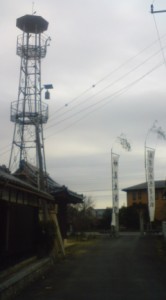 The day before the HOSHI MATSURI banners are put up at the main entrance to the HOKUTO-JI Temple ( note the old fire bell, a rare sight these days) 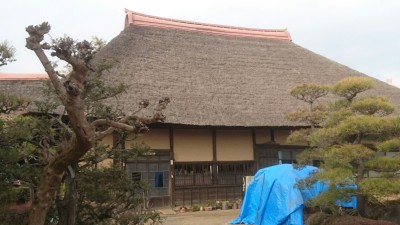 Not far from the temple is the Otsuka House, extant from the mid-Edo Period – an Important Cultural Property

The temple hold two major annual events a year, each based on the lunar calendar ( they usually occur sometime in late January or February and August ), and as I have mentioned before, besides all the Kurihara locals showing up for these events and other Tsukubans, some devotees of Myoken, make the journey to Tsukuba from much farther afield. Especially for the Hoshi Matsuri. Let me tell you about the event as I experienced it last year. 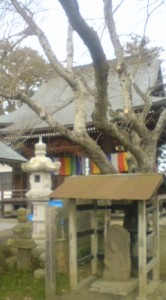 The Hokuto-Ji Temple in Kurihara, Tsukuba, the day before the Hoshi Festival

To tell the truth, since I lived so near at the time ( only about 5 minutes by car).  I went to the temple several times to check on the progress of the preparations which were being made, consisting mostly of cleaning the Myoken Hall and preparing the ritual instruments to be used for the next day`s ceremonies. 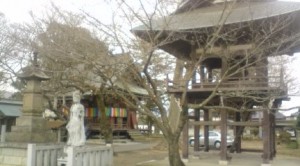 The next morning, when I got up and looked out the window, I found that there were near blizzard-like conditions. I had to confirm whether or not my work would be cancelled or not, but I KNEW the festival would be on. Before I headed off for the university, I checked in at the temple and found the TEKIYA ( festival stall vendors) struggling to set up there booths. I also found that already early in the morning, and despite the weather, that dozens of the neighborhood men who help run the event, as well as several Shingon priests brought in from other temples, were all busy, and that some Buddhist ceremonies were already underway. The scene was a bit depressing since there were no visitors at the temple yet- only priests, staff and especially VENDORS! But first I had to get to my work. Luckily, I was able to return to Hokuto-Ji at my lunch break- and THANK MY LUCKY STARS- the snow had stopped and it had turned into a beautiful day! I made my way through the  row of ROTEN ( outdoor shops). Let me stress that these were not the kinds of stalls that you find at major festivals like Matsuri Tsukuba- these were like something out of another age- with flamboyant sales talks and performances. Sellers of traditional medicines, citrus fruit, dried persimmons, bonsai, handmade farming implements and brooms, pickles and dried fish. A man selling amulets and almanacs, wearing traditional garb was trying to attract customers using a ventriloquism act. All the while, among the hawking , eating , and good cheer, the priests had a sacred fire ( GOMA TAKI) going, and devotees were continually plying up into the Myoken Hall to pray- and from what I learned from my own unofficial survey, most of these prayers were for business success, and good harvest. After offering prayers, most worshipers bought one of the many different Myoken amulets which were being sold by the temple which was staffed by what seemed to be all the adult males in the neighborhood. The priest would be at it till about 4:30. The vendors, started packing up soon after that ( I came back AGAIN after work!). With full stomach, arms laden down with my purchases ( including an oni oroshi style radish grater!), after having chatted with some old friends and having had the pleasure of making new acquaintance, I headed for home with the drumming , chanting and mystery, with all the HISTORY ringing in my ears. As I approached my front door, I remembered to take take a short look at the stars, twinkling in the crisp , wintery, night-sky 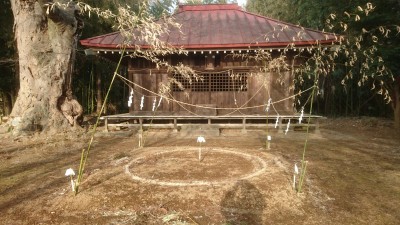 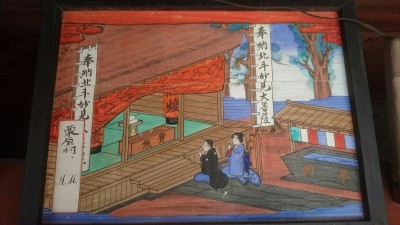 This e-ma votive picture hangs in the Myoken Hall at Hokuto-ji. Perhaps it was offered to the temple as a prayer for conceiving a child. 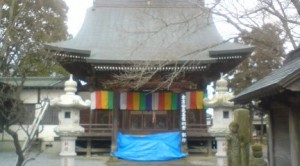 Hokuto-Ji in Kurihara, the day before the Hoshi Matsuri 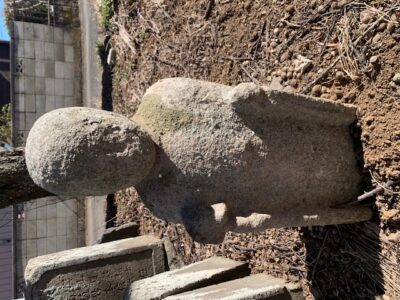 An old weather-worn stone statue of Jizo outside the main entrance to Hokuto Ji.