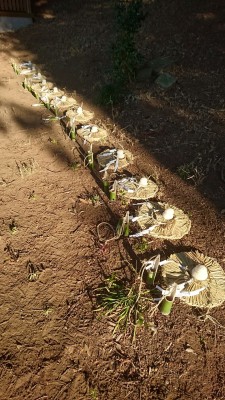 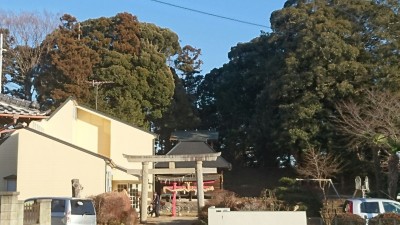 There are approximately 400 ancient KOFUN burial mounds within the Tsukuba City limits, broken up into about 50 different clusters. A dozen of the most interesting, the so-called “key-hole” type tumuli (because of what they look like from the air – old-fashioned key-holes) stand in a line along the Sakura River (between the Tsuchiura-Gakuen Road and Mt. Tsukuba). This is understandable considering the fact that the local chieftains buried in them had come to this this area from distant Western Japan (Yamato or Kyushu) by ship, back when Lake Kasumigaura was a big bay and the Sakura River’s flooding created fertile agricultural soil along its banks (to this day these rice growing areas along the Sakura River are referred to by locals as AKUTO, a unique expression, totally incomprehensible to outsiders,, which has its roots in the Akutogawa River in Osaka, which floods its banks every year and filling the adjacent soil with nutrients). 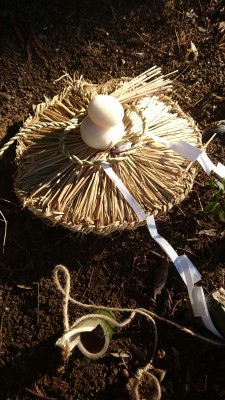 A closer look. Since this shrine was once part of a Buddhist temple of the Shingon Sect (the now defunct Yo-fuku ji), a school of Buddhism which puts great emphasis on the inter-action between the male and female forces, we can interpret the circle of rope as representing the female and the rice-cake “tower” as representing the male. Note the tiny fish that were place on the straw altars live.

Perhaps the most beautifully shaped of these distinctive burial mounds to be found in Tsukuba, is one of the three tumuli located in Matsutsuka ( literally: Pine Covered Mounds) a hamlet of about sixty closely clustered houses surrounded by large swaths of farmland (and just near the river, of course). Its key-hole shape is perfectly preserved and covered with majestic trees. At its base is a medium-sized Shinto shrine dedicated to the deity of Kashima (along with 12 other deities). There are dozens of Kashima Shrines in Tsukuba (they are the most common type of Shrine within Tsukuba’s city-limits) and this is of course significant. The mother of all Kashima Shrines is the Kashima Grand Shrine which sits near the mouth to what is now Lake Kasumigaura. It was the shrine at which all troops dispatched from Western Japan would stop to pray at before entering these part, a shrine that represented the power of the Yamato Empire and which was believed to provide spiritual protection to the realm.

It is no coincidence either that there were, in past ages, six temples of the Shingon Sect in the immediate area (now there is only one : Tofukuji ) – it was Kashima Shrines and Shingon Temples that were used to spiritually “pacify” this area after the 10th century uprising of the warrior Taira no Masakado (interestingly, Masakado`s daughter is, according to legend, buried just 300 meters from the Matsutsuka Shrine, just out in front of Tofukuji) 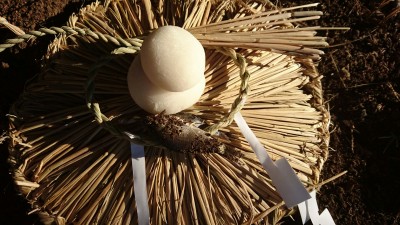 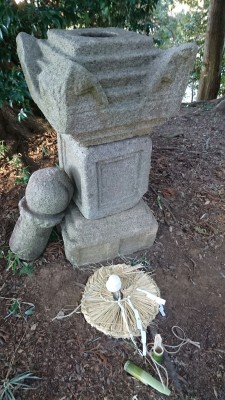 On the second Sunday of January each year, the Ujiko (parishioners) of the Matsutsuka Shrine come to make offerings – and then have a New Year` s party (in other words get blasted on Sake).

You can imagine how surprised they were when I showed up today! In fact I can`t help but chuckle now when I think of how dumbfounded they looked as I approached. There was one gentleman though, a youthful looking 76 year old who, without skipping a beat, began to show me the unique offerings that had been made earlier in the day and then gave me a tour of the tumulus and the surrounding area. 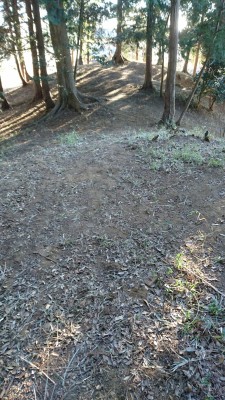 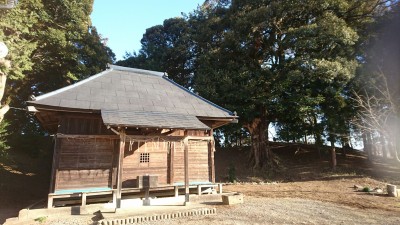 What struck me more than the straw altars that they had woven, or the majestic “sacred trees” that covered the tumulus, was the fact that they had made offerings of LIVE fish, some of which, in their death throes, had wiggled the altars they’d been placed on and fallen off onto the ground.

As Mr. Suzuki led me over and around the tumulus and then around the neighborhood, I tried to conjure up the scene, more than 1,500 years ago, of conscripted workers building the large tomb and surrounding it with HANIWA figurines. I  tried to imagine the stragglers from Masado`s defeated rebel army hiding out in the surrounding countryside as Sadamori and Hidesato`s forces hunted them down. I also tried to picture the 19th century Meiji Period fanatics, who like the cadres during China`s Cultural Revolution went around the area just after the Meiji Restoration of 1868 and forced the Shingon Temples in the neighborhood to close down… 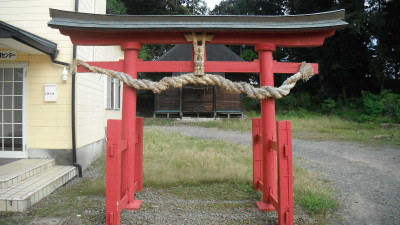 It was so peaceful and quiet though, so perfectly bucolic, that I couldn`t bring any of these images to mind for more than a fleeting moment – and I gladly accepted Suzuki-san’s offer of a brimming glass of Sake. 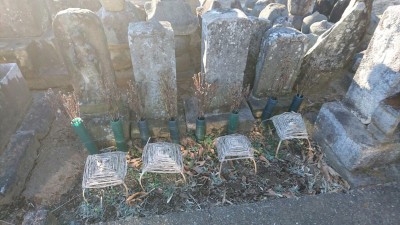 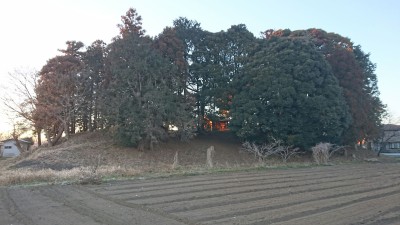