A MANYOSHU Poem that Sheds Light on the Nature of the Ancient KAGAI ( 嬥歌 ) Coupling and Fertility Rites Once Held on Mt. Tsukuba 2 November, 2020 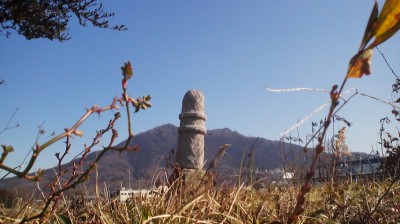 A mysterious stone monument on the south–west side of Mt. Tsukuba

Poem 1759 from volume 9 of the Manyoshu written by the government official Takahashi Mushimaro describing his experience attending the KAGAI* at Mt. Tsukuba:

“On Mt. Tsukuba, where the eagle dwells-  I had arrived at the the Port of Mohakitsu, and there at a place above those waters, were the young men and women who  had gathered to exchange songs at the KAGAI- there I soon found myself consorting with another man`s wife- and  MY wife invited to MINGLE with another man! But I beg you… do not accuse us of wrong! The Gods who have ruled this mountain since time immemorial do not forbid this practice- on that special day. ”

(my translation- which I discuss below) 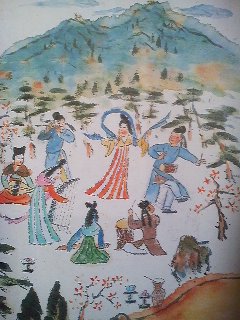 The Mt. Tsukuba Kagai- one of a series of illustrations of based on Manyoshu poems on display at the Nara Manyo Culture Center-though based on details gleened from poems in the Manyoshu and the Hitachi no Kuni Fudoki suggest that what was going on at the KAGAI was more than just singing and dancing

The Manyoshu is the oldest extant collection of Japanese poetry and it is considered by many to be the greatest. Compiled in the late Nara Period (710-794), it consists of more than 4,000 works, both short and long written between the 4th and 8th centuries. The poems found in it are valuable not only for their skillful use of the classical Japanese language or their ability to express universal human feelings. The collection also provides a goldmine of information about the the world in which the poets lived- not only the natural environment around them (the mountains, trees, plants and flowers)- but also the lifestyles and customs of those times (often called the MANYO NO JIDAI- the AGE OF THE MANYOSHU POETS).

Many who live in the old villages on and around Mt. Tsukuba take pride in the fact that THEIR mountain is mentioned 25 times in the Manyoshu, while Mt. Fuji, now probably the most recognizable mountain in the world, appears a mere eleven! Now how , you may ask, could it be that a lowly mountain (just 877 meters high) that was at that time way out in the provinces- at the very edge of  civilization, in fact (from the point of few of educated class of the Japanese court based in and near Nara), a more popular subject of poetry than majestic Mt. Fuji ? ( though we must not forget that Mt Fuji itself was located far beyond the pale of Yamato civilization in the Manyo Period – and this is refelected in the origin of its name- which is Ainu language for fire-mountain)

Well, the first reason is that among the poems of the MANYOSHU there are numerous works written called poems of the SAKIMORI, peasants conscripted from Eastern Japan (mostly from in or around what is now Ibaraki Prefecture) to serve as border guards on far off Kyushu Island. Many of these poems (which might not actually have been written by the troops, but by aristocrats with them in mind) express  deep longing for the families they left behind anfd for their native land . Mt. Tsukuba was used as a symbol of their longing for the villages from which the mountain was always visible. I have written in more detail about the SAKIMORI and the SAKIMORI POEMS here: 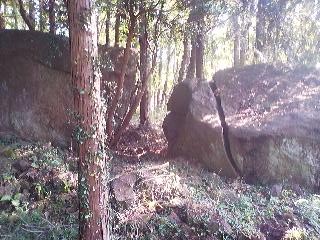 The BUJO GA ISHI- The Male-Female Stone (the Female is marked by a long slit) which which can be found at an open meadow half-way up Mt. Tsukuba (near the Fureai no Sato). Some scholars believe that the ancient KAGAI Festival took place at or near this spot. Today a giant signboard with the poem I discuss in this this article printed on it stands about 100 meters from these stones

But there was another reason that Mt. Tsukuba came to be referred to by great poets- even (or mostly) by those who had never actually been near the mountain itself. You see, because of its TWIN PEAKS, which were seen by the ancients inhabitants of the area as representing the MALE and FEMALE forces, the mountain now known as Mt. Tsukuba became a symbol of the interaction of these forces- in other words: SEX and FERTILITY.

And because of this association in the minds of the people, the mountain at some point in time immemorial became the site a twice-a-year (spring and autumn) festival called the KAGAI . This was apparently a Fertility Rite which consisted of male and women pairing off after having chosen an appropriate partner through the exchange of improvised poems. After the couples hooked up, we can only guess what happened next. It seems that many villagers found their life-partners at this event. In fact, all that we know about this ancient rite is what we can be gleaned from several poems in the Manyoshu which refer to it, and some poems and other references to it made in the Hitachi no Kuni Fudoki ( a record of the legends and resources etc. of this region, commissioned by the Emperor 1,300 years ago).

One of the most important sources for piecing together exactly what the Kagai  was like, is a poem by a low ranking government official who in the 8th century spent time travelling the provinces. He even reached far off Hitachi Province. His name was Takahashi no Mushimaro and when he heard about the Kagai he must have wanted to experience it first hand.

which to my surprise is usually translated as if it were an expression of a personal creed. Here is a typical translation taken from those which can be found online:

On the Mountain of Tsukuba / Where the eagles dwell / Near the Wells of Mohakitsu, / Seeking each other, in song of Kagai, / I will seek the wives of other men / And let other men woo my own. / The gods dwelling in these mountains / Have allowed this / Since olden times; / Do not make exception today / And do not reproach the lovers / And blame them not 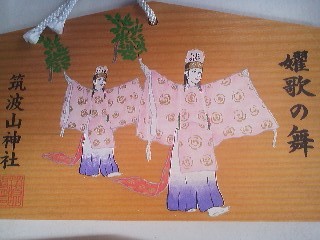 An E-ma votive tablet on sale at the Mt. Tsukuba Shrine. It depicts the Kagai no Mai Dance which is performed twice a year (April and November 1st) on the days of the Ozagawari Festival which is most probably a living remnant of the ancient Kagai

For me, however, such a translation loses the sense of Mushimaro as a curious traveller who has visited an exotic ritual which he describes with his courtly comrades in mind. He even asks them for their understanding of his outrageous behavior by  declaring : When in Rome, do as the Romans do!

In my translation at the top of this page, I take MOHAKITSU to be Mushimaro`s port of arrival before his assent of the mountain (since I assume that he travelled by boat, the way most travelling was done in this area in those days). Most translators and Japanese commentators take this mysterious place name to be a spring or well or some sort of body of water on the mountain.

I can`t believe, however, that Mushimaro would be so detailed in his description of place names on the mountain. Since TSU means port in Japanese, I take MOHAKITSU to be the site at which he disembarked from his boat- just as a traveler today would describe how he/ she got off at Tsukuba Station before taking the bus up to the mountain. I also changed the tone in general to one of travel reportage- and the rationalization to taboo-breaking behavior to both Mushimaro AND his wife- since she apparently joined in on the festivities as well.

To tell the truth, if you are interested in the nature of the KAGAI, these details are not really important. Mushimaro`s poem reveals that not only young unmarried men and women participated in the festival- but married people were able to enjoy two days a year of free love as well- all in the name of agricultural (and human) fertility. Though, the Kagai has died out long ago there are always rumors that it still takes place somewhere in Tsukuba.

A few years ago I was asked to give a lecture to the Senior Citizens Association in the town of Hojo, which is near the foot of Mt. Tsukuba. Interestingly- unforgettably in fact – the president of the association, when giving me some words of advice on making the event successful, recommended that I make a lot of jokes- especially those with sexual innuendo. I followed his advice and the event went over really well. Lots of laughing and joking around. One line that everyone seemed to truly enjoy came to me during the question and answer session. When asked why I had come to live in Tsukuba, I explained that it was because I had heard that there was the KAGAI there…….. but that I was disappointed that I had never found it.

I hope to continue writing a series on all the rest of the 25 poems in the Manyoshu mentioning Mt. Tsukuba- stay tuned!   I have already written about another of the poems which mention Mt. Tsukuba here:

* The word KAGAI ( 嬥歌) was/ is the word used in Eastern Japan to describe parties at which couples paired off after recitation of poems. In standard Japanese such events are called UTAGAKI (歌垣)- which in fact were once held all over Japan.

According to the Hitachi no Kuni Fudoki, there were also several other KAGAI spots in what is now Ibaraki Prefecture- though the ones on Mt. Tsukuba were apparently the most famous. According to that same book thousands of couples would travel long distances (from what is now Tochigi or Kanagawa Prefectures) to Mt. Tsukuba for a chance to find a partner for marriage or perhaps just one wild, unforgettable night.