The Shrub with the Clusters of Lustrous Purple Berries and the Grand, Literary Name- MURASAKI SHIKIKBU (ムラサキシキブ) 15 October, 2020 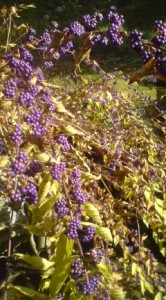 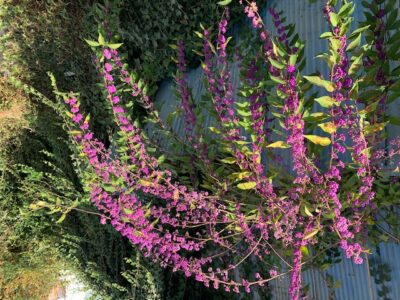 I was at Tsuchiura Station waiting for the bus to Ibaraki University – and right beside the bus-stop was this big KOMURASKI bush (October 2020) growing wild out of an abandoned building.

This is not  because of the shiny purple fruit these bushes bear, which remind me  of miniaturized versions of the GUMBALLS I used to enjoy (and covet) so much as a kid. It is because these plants with their distinctive berries are NAMED AFTER A PERSON – a novelist, in fact. And not just any scribbler- but a giant of world literature-  whose name ( though her real name in fact is unknown!*) evokes a world of sublime elegance and beauty, and whose writings expressed  a profound and terrible sense of longing . It is a name especially dear to anyone interested in Japanese culture- it is that by which the composer of the GENJI MONOGATARI ( Tales of Genji)** is known. 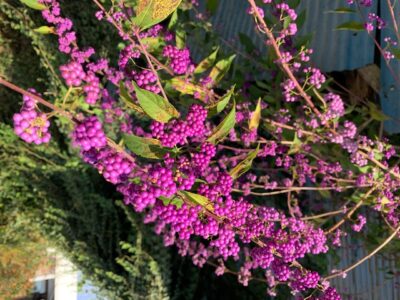 A closer look (at Tsuchiura Station)

So each time I spot one of these easily recognizable shrubs ( when they are bearing their fruit) I can’t help but call out a happy greeting to what feels like an old friend- MURASAKI SHIKIBU ( Lady Murasaki) ! 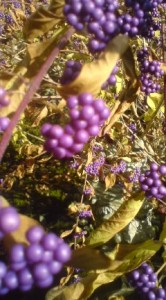 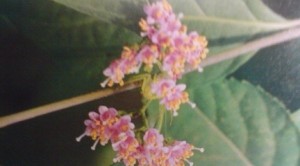 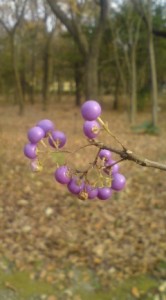 So now you can tell the difference, But, for some reason, it doesn’t really seem to matter. Here is what I mean: 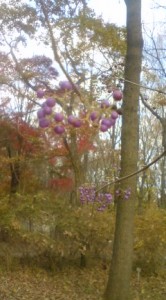 Callicarpa dichotoma ( komurasaki) seems to be much more abundant than  callicarpa japonica, in gardens, parks and temples.  Still, BOTH plants ( though completely different species!), are referred to as MURASAKI SHIKIBU. What can I say? It must be the irresistible attraction of the name.

So keep an eye out for these bushes- either of them! Hopefully you will spot some before the birds have finished off their fruit ( though birds seem to love them they are not edible for humans).

And don`t forget to say hello to my old friend- Lady Murasaki! 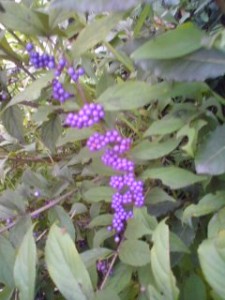 * Murasaki Shikibu is a pen-name. Shikibu (式部) was her father’s position at the Imperial Court and Murasaki is one of the characters in her great work, The Tale of Genji. As with the other women writers of the Heian Period, we do not know her real name! Her father, Fujiwara no Michinaga, however, left a diary the MIDO-KANPAKU KI. One theory is that the Fujiwara Takako (藤原香子) who is mentioned in it, is in fact, Lady Murasaki.

** I have translated a book, “KANGITEN – Tracing the Roots of Japan`s Embracing, Dual-Bodied, Elephant-Headed Deity of Conjugal Bliss” – in which the author (Junichi Saga) puts forth a fascinating idea (among many others!) – that the Tale of Genji, with its multi-amorous hero, is a Japanese (and very toned down) version of the Kama Sutra!