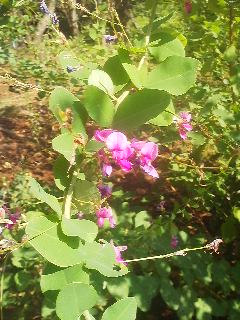 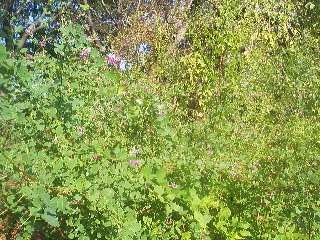 But when standing even at only a slight distance away, it is hard to notice that there are any flowers at all ! A HAGI bush in full-bloom in Tsukuba

By Avi Landau
A fundamental element of traditional Japanese culture is seasonality. By this I mean having an awareness of and CELEBRATING each particular time of year. This is practiced by eating IN SEASON foods, taking notice of and appreciating  various natural phenomena ( blossoming flowers, the activities of animals, particular types of clouds or rain, etc.), and by including or displaying standardized seasonal motifs, appropriate to the season, on ones clothing, in hanging scrolls  (which are changed accordingly throughout the year) and other decorative objects. Seasonal key-words ( KIGO) are also used in poems (and letters). 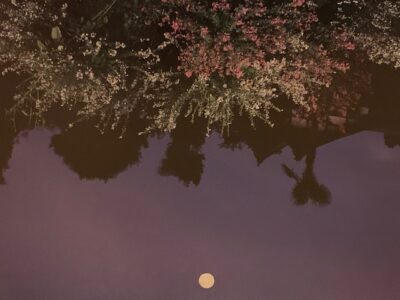 Hagi by moonlight at a temple in Kyoto

Over the centuries there have accumulated hundreds of such representative symbols of the time-of-year, many of them instantly understood by the average Japanese person.
For example, the chirping of cicadas (in poems, movies, etc.) tells you that the season being evoked is summer. And naturally, when it IS summer, many Japanese consciously take notice of this natural chorus ( while for many foreigners new to Japan, it is merely a disturbing or annoying cacophony!).
For spring there is of course the cherry blossoms, or the call of the bush warbler ( uguisu).
In winter, there are fugu ( pufferfish) and anko ( monkfish), which many Japanese make sure to enjoy ( in hot savory stews) at least once a year in that season. 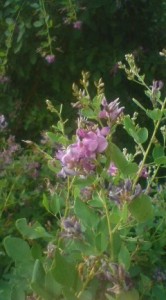 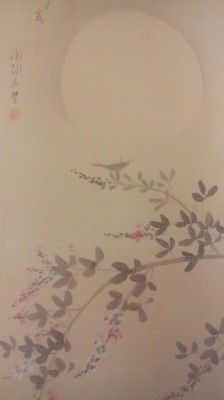 For autumn, there is the moon, which seems somehow larger and nearer to us in that season. When the moon is full in September, many Japanese make offerings to the moon ( or I guess we could just call them decorations), which include small moon cakes, and two of Japan’s iconic plants of fall: SUSUKI ( pampas grass) and HAGI ( bush clover). 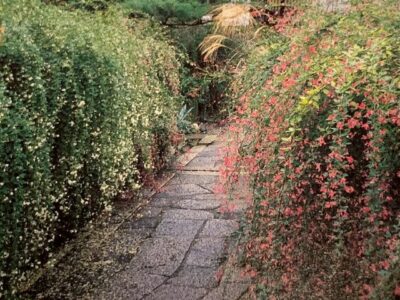 Well-tended hagi at a temple in Kyoto

HAGI, whose Kanji character – 萩, when broken down to its elements actually means AUTUMN GRASS, has long been a beloved plant in Japan, deeply connected with autumn. ( Interestingly, in China the same character refers to a DIFFERENT plant! A type of mugwort. This means that in the Heian Period, the Japanese took that character ( autumn grass), and adopted it for HAGI, a plant which for them symbolized autumn).
The blooming of Hagi, a shrub whose small, purple or white flowers  start appearing in late August, was indeed an important symbol of autumn for the ancient Japanese . In fact, of all the many plants ( about 150) mentioned in the first great collection of Japanese poetry, the Manyoshu ( compiled in the late 8th century, and containing poems written between the years 347 and 759 AD), hagi appears more than any other (in 140 different poems, in fact)! 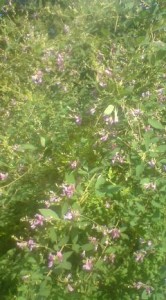 Bush clover (hagi) in Tsukuba
I have always found this fact astounding. That of all the plants and flowers in Japan,  bush clover is mentioned most often by the ancient poets. I find this so surprising because there are so many other outstanding flowers celebrated in Japanese culture- the plum blossoms, the cherry blossoms, the irises, the maples trees, the violets, etc… and all of these are just that- OUTSTANDING, catching the eye of even those who don’t know their names. Bush clover, on the other hand, is much more difficult to spot and often goes unnoticed in today’s Japan ( I didn’t even realize until LAST YEAR that HAGI grew along many of Tsukuba`s main roads!).
So what was it that so endeared this shrub to the Japanese people of yore.
Well first, hagi bloomed with the first cool breezes of late August signifying the end of Japan`s intolerable ( and unhealthy) summer heat and humidity. The upper classes of the old capitals would go on hagi-viewing excursions and bring back some to plant in their own gardens , or as gifts for friends. Women would also decorate their hair with its sprigs ( this is evident from several extant poems). 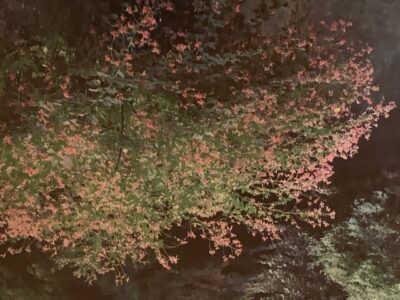 A bush of pink hagi

Just as importantly ( or even more so), this plant ( a member of the pea family), seemed to possess very powerful life-energies. Cut down to a stub, it can grow back out very quickly.
(There is a story in the Ancient Chronicles of Harima of how the Empress Jingo, after having just arrived back in Japan from her military adventures in Korea, was astounded at how long a hagi bush had grown overnight).
Also, with its long, slender branches that sway continuously even in the slightest breeze ( that is why it is so difficult to photograph them well with a cell-phone!), the ancients considered this plant to be representative of the ACTIVE or MALE FORCE ( the YANG), in the same way that the willow was.
In fact in the Manyoshu, the Kanji character used to write HAGI was not today`s 萩. There were a few other ways of writing its name (pronounced in the same way): 生え木, and 芽木, 芽子、or just 芽、 which literally mean: growing tree (or life tree) , sprout tree, sprout child and just plain- sprout, respectively, indicating how this plant represented GROWTH and LIFE to the ancients.
It was often used in former ages as fodder for horses and oxen and was also an important fertilizer, making it a practical part of people`s everyday lives as well.
And besides being planted in private gardens and temple grounds ( and in the present age in parks and along roads), hagi was also planted in certain areas to prevent soil erosion.
(Checking a book on traditional remedies I have found that the dried roots of hagi were used to treat dizziness and overheating.) 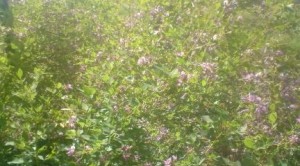 Hagi by the side of the road in Tsukuba
Over the centuries, with the influence of the ancient poets bearing strong, hagi has remained an important symbol of autumn, featured as a motif on painted scrolls, painted screens, kimonos, etc.
There are also records of several major HAGI-VIEWING receptions hosted by the Imperial Family or wealthy aristocrats. These events involved not only the enjoyment of bush clover, but also the appreciation of the melancholy chirping of various autumn insects which were purposely released onto the grounds for the occasion.
As I have mentioned in a previous post, the special sweet eaten around the time of the autumnal equinox ( today!), is called O-Hagi, giving it a distinctive autumn flavor ( as opposed to the same sweet eaten around the spring equinox called Botamochi, named after the famed flower of spring, the botan- peony).
So why not celebrate the season! After you’ve had some chestnut rice ( kuri-gohan), tea and O-Hagi, why don`t you get out and take a little walk. You’ll surely have plenty of insect music to accompany your wanderings. And keep an eye out for hagi- I’m sure you will find some.
And if you would like a more intense bush clover experience, why not head up to Mito, our prefectural capital? There, at the Kairakuen Garden ( so famous for plum blossoms in March) you can find plenty of amazing hagi growing. In fact, I think that in fall, its better than it is in spring ( when it is so incredibly crowded!). 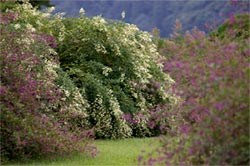 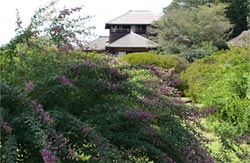 Hagi at the Kairakuen Garden in Mito. 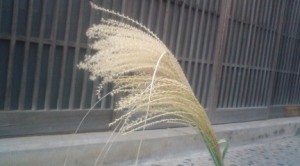