Some Thoughts on Eclipses, Japanese Mythology, Princess Himiko, and the Location of the Ancient Land of Yamatai 22 June, 2020 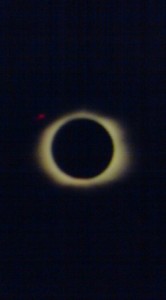 Total eclipse of the sun (Feb. 26th,1998) which I oberved from the Island of Curacao (Netherland Antilles)

Even after having been completely demystified by scientific explanation, solar eclipses remain an awe-inspiring, even mystical spectacle, which can leave an impression that lasts a lifetime. Those (outside of Japan) who were able to observe the GOLDEN RING of yesterday`s annular eclipse, will likely have its image branded in their memories till the end of their days. And I can tell you from my own experience with a total eclipse of the sun back in 1998 observed from the island of Curacao, that no matter how scientific or logical you are, standing there for a few minutes gazing up into the THROBBING, PULSATING, FIERY RING formed by an eclipse can leave you feeling strangely like a DIFFERENT PERSON  when its all over.

Think then, what it must have been like for certain people of past ages. Those who saw every little feature, movement and arrangement in the heavens as being significant to their own lives. One day, they would be going about their usual business , when suddenly the sun would become partly, or even totally obscured by a black disc, throwing the world into an eerie darkness- and for the moment, their lives into confusion and even terror.

It should not be strange at all then, considering the strong impressions made by them, to say  that the occurence of solar eclipses could possibly  become important components of the FOLK MEMORY of certain peoples, who lacking in any scientific grounding with which to explain what had occured,  would incorporate their experience of a solar eclipse into a fantastical version of history- in other words- a mythology.

Now with computers, it has become possible not only predict future eclipses anywhere in the world, but also to determine when and where PAST eclipses could have been seen. Using this data scholars can link the eclipse-like phenomena which have been recorded in various historical records and mythologies (including the bible) with actual  eclipses which computers show to have occured in certain years.

Doing this is, in fact, NOT something completely new, however, as the ancient Babylonians and Chinese began recording the occurences of eclipses, and dating them, as far back as 4,000 years ago. Thus, it had long been possible to use THEIR  records to determine when ECLIPSE-LIKE mythological events might have actually occurred.

An example of this can be seen in the linking of an eclipse-like event mentioned in the Bible ( Amos 8:9 ), with an actual recorded eclipse. The biblical passage reads: AND ON THAT DAY I WILL MAKE THE SUN GO DOWN, AND DARKEN THE EARTH IN THE CLEAR DAY- which clearly seems to suggest a solar eclipse.

It is possible to link the event in this biblical narrative with an eclipse which was recorded and emphasized (for its supposed significance) in the EPONYM CANON, the historical records of the Assyrian Kings. Since archaelogists and historians have been able to adjust the Assyrian calendar to our own, we know that this eclipse occured in the year 763 BC. Of course there is some debate on the matter,  but  scholars believe that the event referred to in the Bible was the eclipse of THAT YEAR.

Amaterasu no Omikami ( the Sun Goddess, still worshiped by the Imperial Family as their direct ancestor), distraught by her brother Susanoo no Mikoto`s (The God of  the Storm) outrageous behaviour -damaging rice fields and irrigation canals, throwing excrement about, and finally hurling a flayed horse at  her attendants who were weaving at the time, killing some of them- withdrew into a cave , sealed herself up with a boulder and subsequently threw the world into darkness ( a very eclipse-like episode indeed!).

The myriad Gods were thrown into consternation and at a loss as to what to do. They finally decided to lure her out with entertainments (lewd dancing, singing and raucous laughter), and a MIRROR in which the Godess saw herself reflected when she peered out to see what all the fun was about. Seizing the chance, as she started to come forward, they grabbed her and blocked the cave so that she couldnt slip back in. Light was returned to the world and all was well again. For a slightly more detailed account read: http://en.wikipedia.org/wiki/Amaterasu .

The impact of this short but very influential story can be seen in several unique aspects of Japanese life (two of which I will mention here). First, at festivals and certain other religious events (Cherry Blossom viewing, for example) the Japanese often become , under the influence of liquor, quite animated and excited, often to the point of lewdness ( as if in imitation of the dancing which Amaterasu was so interested in, and appropriately entertaining for the Gods manifest in the blossoms).  Then you have the religious importance of  mirrors (which can often be be found inside shrines or in the form of the New Year`s mirror rice cakes -kagami-mochi, 鏡餅, which are also intended to ATTRACT the Gods) which is most probably connected to the mirror used in the story to attract the Goddess. 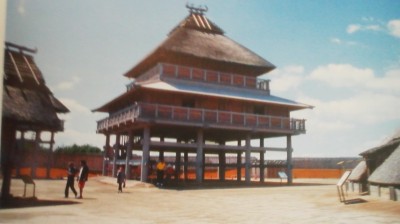 Reconstructions of various buildings at Yoshinogari, Saga Prefecture. The archaeological findings here, along with the fact that 2 major eclipses were visible from this site with only a short interval between, suggest that this might have been the location of the YAMATAI KOKU STATE mentioned in ancient Chinese Chronicles

In the 3rd century, a Chinese scholar. Chen Shou (233-297), wrote about what he referred to as the Wa people in the Land of Yamatai, who were ruled by a shamaness named Himiko. His writings (called the GISHI in Japanese) give an intriguing account of  the 3rd century way of life in that country, which is now known as Japan. (read more at): 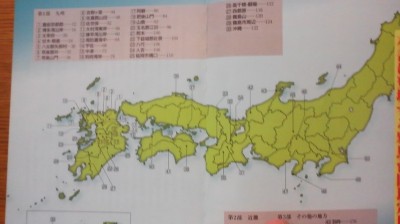 A map showing 50 different sites which are all possible locations of the state of YAMATAI mentioned by ancient Chinese chroniclers.