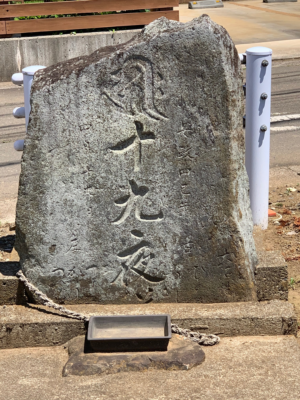 This impressive Ju-ku-ya (Nineteenth Night) sacred stone monument is interesting in that it not only commerates the fact that prayer meetings were held on this spot (with a focus on the Nyoirin Kanon) , but also acted as a road-sign!  Note the single Sanskrit character on top (representing the Nyoirin Kannon) which in Japanese is read KIRIIKU (hrih in Sanskrit). Beneath it in large characters is JU-KU-YA (the Nineteenth Night). On both sides of this is a date – The 19th day of the 4th month 1857 (Ansei 4). On the bottom right corner it reads To the right O-numa village (meaning this you could get there by turning right!). On the bottom left it reads: To the left Karima and Tsukuba. On the back it reads: Tsuchiura! You can find this in Nishi O-numa on the road that runs between the Hanamasa Wholesale Grocery Store and the Onogawa Community Center

Wondering whether the apple trees near the Onogawa Community Center were blossoming, I rode my bicycle for about 3 kilometers to get there, travelling straight on, down a single road. Here are just some of the distractions I encountered along the way…… 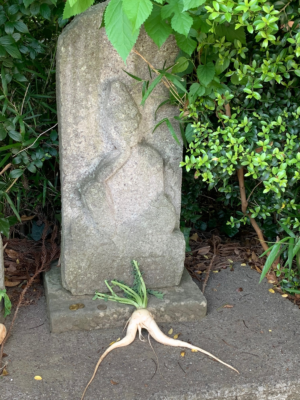 A Nyoirin Kannon, easily recognizeable, with the deity sitting with right knee up and resting a tilted head in the palm of the right hand. This is one of the most common types of SEKIBUTSU (sacred stones) found in the Tsukuba area and is closely connected to the Ju-Ku-Ya (Nineteenth Night) stones in that it was this deity, believed in this area to be a protector of women`s health, that is the focus of worship in the 19th Night prayer meetings (Ju-ku-ya ko). Note the twin pronged radish that has been left as an offering, a unique custom in the area! This one is dated 19th Day of the 10th month 1797 (kansei 9). This SEKIBUTSU is part of a small cluster of them in front of a Kashima Shrine. If you turn down the walking path (going away from the shrine, you will come to a quaint old shop – the Higanoya. 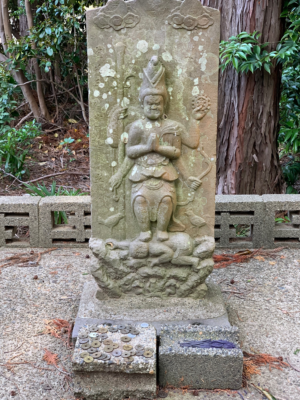 Going up to the shrine and walking around to the left, you can find this beautifully preserved Shomen Kongo (青面金剛) dated 1750 (Kan`en 3). Note the variety of weapons the deity (who is believed to fight epidemics (especially smallpox) is holding in his numerous arms. He is standing on and suppressing a demon. There are roosters on each side (not very skillfully rendered! – but roosters are part of this deities iconography). On the very bottom you can see the Three Monkeys (also a standard part of this deities iconography). Such images can be found out in the open like this in just about every one of Tsukuba`s numerous hamlets. They are a testament to the popularity in this area (up until the post-war years, at least), of a fascinating custom (of Taoist origin) called Ko-shin Machi (庚申待), in which villagers would stay up all night telling each other stories till the sun came up (thus the roosters!). This was done every sixty days (on the ko-shin 庚申 days, according to the Chinese zodiac)! And why was this done? Well, according to Taoist teachings, if one were to fall asleep on a Ko-shin Night, the three-worms (sanshi no mushi) they believed dwell within each person, would ascend to heaven and report his/her sins-  thus leading to a shortened life. Naturally, anyone believing this would want to stay up all night. And even if they did not, they probably enjoyed the night out- and all the stories – (I have translated some of them in the book “Remembrance of Village Days Past”.