No Butter at Your Local Supermarket (during the current Japan-wide shortage) ?- try your luck at a convenience store 12 December, 2014 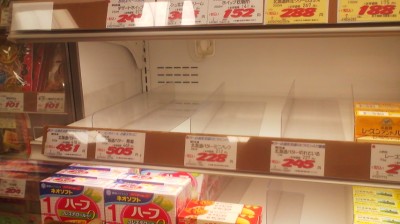 No butter at this supermarket, either (December 2014)

I needed butter- and plenty of it. I was planning on making some khachapuri, a delicious flat- bread filled with cheese- a staple food of Georgia (not the state in the American South, but the independant Republic in the Caucasus !) which you might be surprised to hear I first learned to love right here in Tsukuba, at the home of my dear friends Lika and Sandro. But alas, like so many other special people you meet here- they come and then one day they`re gone……. I was left only with an English language Georgian cookbook as a keepsake. There is a recipe in it for khachapuri. It calls for 12 tablespoons of butter.

I checked my refrigerator, and realized I would have to go out and get some more.

When I got to the nearest supermarket I went straight for the dairy section- only to be greeted by a wide white gap among all the vividly packaged products. I caught a clerk and asked where the butter was. She just smiled and apolegetically explained that there was none.

There was nothing to do but try another supermarket. When I got to its dairy section- the same gaping white space, pulsating mockingly in the fluorescent light !

With sagging head I headed back home- defeated. There would be no khachapuri. 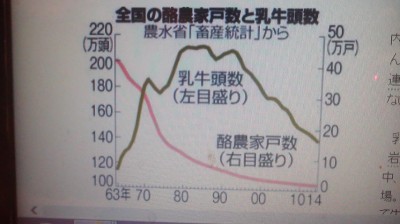 The next day when I mentioned the missing butter to a group of housewives, I was told that that was the current situation. There was (and currently is) a terrible BUTTER CRISIS in Japan. None in the supermarkets (though there is still plenty of milk, cheese and yoghurt which are priority dairy products in Japan over butter)

The immediate reason for the shortage was the much hotter than average summer weather they in Hokkaido (the major dairy region in Japan) which affected mik production. But the real problem lies in a more chronic problem- the drastic drop in the number of dairy farmers, which according to the Asahi Shinbun newspaper has been as steep a decline as 96 % since the 1960s.

This is something I have have found evidence of with my own eyes here in Tsukuba with its abundance of abandoned cow sheds.

The reasons for the drop cited by the Asahi were rising feed prices and fear of price drops if the TPP is adopted (and Japan flooded with cheap butter from abroad).

Speaking to former dairy farmers in Tsukuba, however, I have gotten the feeling that it is the hard life- waking up early in the morning all year round, nursing sick cows and NEVER being able to take a holiday- that has driven families away from milk production..

I also wonder if all the dairy farmers who had to have their cows “put away” after radiation exposure has had an effect on the decrease in dairy production- it must ! I remember the plight of the dairy farmers being a big topic in the news right after the Fukushima disaster. They were demanding compensation from the Tokyo Electric Power Company.

Now the media never mentions these farmers. Have they been asked to keep silent in order to make the effects of the radiation less felt in our daily lives? 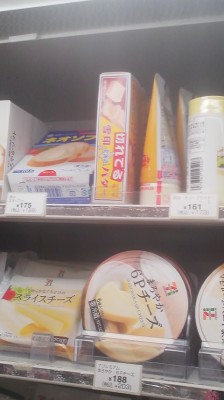 I finally did find some butter (upper shelf, middle)- at a convenience store! I checked out some others, and found butter there, as well. So if your local supermarket doesn`t any in stock, try a conbini – you might get lucky (though I cannot guarrantee anything)

Anyway,  I eventually did find some butter – at a place that I normally wouldn`t think of buying it – at a convenience store (though it really should NOT have come as a surprise to me since almost  our ENTIRE lives in Japan can now be run out of a convenience store!).

I was able to make my khachapuri (MMmmmm) and omelettes for breakfast- and leafy vegetables sauteed in butter and soy sauce. Delicious, and no help to my diet.

It is an old Japanese belief ( or should I say prejudice), that Westerners smell of butter. Well, I wouldn`t want to disappoint anyone !

SO ( 蘇), an ancient dairy product which first appeared in Japan during the reign of Emperor Mommu (697-704). From the 8th to 10th centuries it was produced especially for the Imperial Court. The kanji character used to write the name of this food means to BRING BACK TO LIFE, so it was probably believed to have strong medicinal powers. It eventually disappeared from Japan as the power of the court waned towards the end of the Heian Period

Though  one particular dairy product, something called SO (蘇)  was introduced to Japan during the in the early 8th century – one of the many Indian influences to reach Japanese shores along with Buddhism – diary products virtually disappeared from Japan as the power of the Imperial court waned toward the end of the Heian Period (the Court had promoted the  production of SO and supported the dairy farms across the realm at which it was made).

The fact that the Japanese did not consume any dairy products for many centuries after the production of SO faded away  remains a great mystery in the world food history- it is probalby even more interesting that the Chinese had no dairy either – since they seem to eat almost anything.

Dairy could have provided valuable nutrition to the East-Asian diet, but perhaps it caused severe allergies in a high percentage of the population and thus came to be avoided? Is it possible that the preponderance of allergies, the scorge of contemporary Japan, is the result of the strong presence of milk, cheese, and butter in the modern diet.

Interestingly, even though the Dutch raised cows and goats and produced milk and various dairy products at their trading post on the artificial island of Dejima in Nagasaki, no Japanese seemed to want to emulate their eating habits (though the 8th Shogun, Yoshimune, apparently would eat some kind of cheese or butter upon the recommendation of the Dutch).

It was the Meiji government which came to power in 1868 that brought dairy into Japan for good. They made the decision that in order to compete with the great Western Imperial Powers they would have to emulate the institutions that made them powerful- their armies, navies, hospitals post-offices, their rail-road networks…… and their diets.

Butter was first produced in Japan experimentally in 1872, and was not produced on a large scale until 1886.

Production kept increasing until 1959 when margarine cut into sales.

Ironically, now that the number of dairy farmers has decreased so dramatically doctors are finally reversing what they had once told us- they now say that margarine is bad for you, use butter instead.

In more recent years olive oill has cut into even further into butter`s market share as it is both delicious and said to be the healthiest choice for sauteeing or even spreading on your bread.

It should seem then that butter missing from the shelves would not cause much panic- and that reallly is true.

The big problem is for the cake shops – which Tsukuba is actually famous for (with Cote d`Azur being one of the most successful pattissiers in all of Japan). Together they need prodigious amounts of butter (though bakers in Japan generally use much less butter than their western counterpartd) to work their craft and with the Christmas cake season coming up- they are really in a bind wthout enough butter available.

Then there are also all the French restaurants- who need butter for all those sauces..

The government has apparently begun the process of easing import restrictions on butter – though this would apply only to professional bakers and restauranteurs.

The Ministry of Agriculture has also urged dairy farmers to produce more butter .

Gotta go now. My cheesy and buttery khachapuris are ready to come out of the oven !