Botany Meets Geology at the Tsukuba Botanical Garden- where the PLANT FOSSILS EXHIBITION has been extended through December 23rd 20 December, 2014 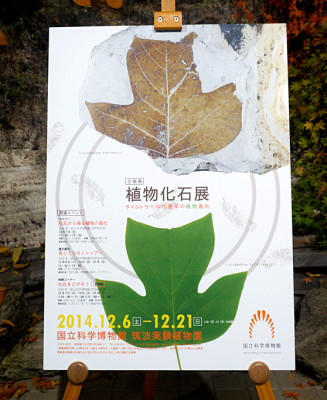 The poster for the Plant Fossil Exhibition features a pair of tulip tee leaves- one real and one fossilized. Now a popular roadside and park tree in Tsukuba, imported from North America, the fossil record reveals that from 35,000,000-400,000 years ago this species grew in Japan. And while this and other species died out in Japan,to live on elsewhere, there is one species- the Koyamaki, which went extinct everywhere else in the world only to live on in Japan (you can see this species at the Botanical Garden)

When we think of fossils on display at museums it is usually a T. rex, a mammoth- or at least an ammonite or trilobite which first comes to mind.  Certainly not leaves or seeds.

This might all change for you, though,(as it has for me) after you`ve seen the Plant Fossil Exhibition (subtitled: Timeslip 500,000,000 Years of Plant Evolution), another fine  show put together by the staff of the Tsukuba Botanical Garden. 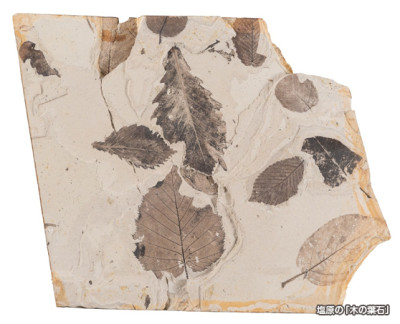 Slab of rock replete with leaves fossilized by compression. These kinds of specimens are called KO NO HA ISHI (木の葉石): tree-leaf stones, in Japanese. There are many sites around Japan at which they can be found. Among them, the nearest to Tsukuba is the hot-spring resort area of SHIOBARA, in Tochigi Prefecture (from which this specimen was taken). A volcanic eruption there 300,000 years ago created perfect conditions for fossilizing not only leaves but fish,insects and frogs, as well.Since 1883, fossils of over 200 different plant species have been identified there。

The exhibition will show you how much there is to learn from plant fossils- about the history of life on Earth, and you will also be amazed by how BEAUTIFUL some of the specimens are.

You might also be surprised to learn how common plant fossils are. One of the best sites for collecting them is in neighboring Tochigi Prefecture, at the famous hot spring resort Shiobara. At the entrance to the current exhibition you are greeted by a poster sized photo of a  fossil-rich cliff there. 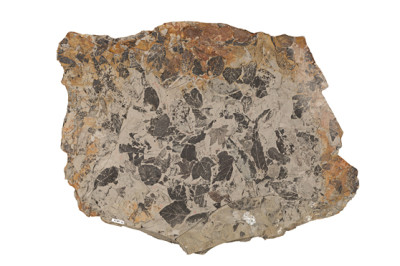 Slab of strata, once under a shallow sea, filled with various leaf fossils

As oppossed to many animal fossils which have been found complete, or nearly so, this exhibition points out that almost all plant fossils are partial- extremely partial. For example- only leaves, or just the trunk, and even more rarely: single seeds, pods or cones. 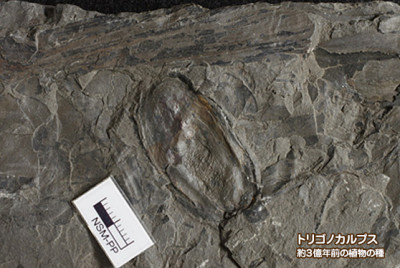 Trigonocarpus seed fossil- 300,000,00 years old at the Tsukuba Botanical Garden. Seed fossils are much rarer than those of leaves.

Most of the plant fossils shown are of two types- compression fossils, in which living matter was covered with and eventually, with the addition of heat and other factors, leave an IMPRINT in stone.

The other type consists of the permineralized (or petrified) fossils in which the insides of organisms are filled with minerals and there is great preservation even at the cellular level. 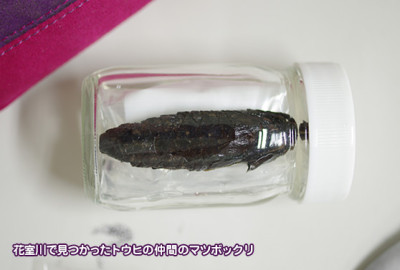 Fossilized spruce cone found in Tsukuba`s Hanamuro River. More famously, back in 1974 the fossils of a nauman elephant, an ancient relative of today`s elephants, was found in the same river (the remains of bison and deer have been found, as well.). A piece of it is also on display as part of the current exhibition, along with cone and seed and tree-trunk fossils found in the river. Looking at this corner of the exhibit helps evoke images of what this area must have looked like 30-40 thousand years ago.

Using the fossil displays. the curators of the exhibition try to show how diferent plant and tree life in Japan was in the distant past and also more importantly how life on Earth has evolved.

Probably what surprised me most was learning that flowers are new-comers to this world of ours- they evolved much later than I had imagined- long after dinosaurs had become extinct and the rise of mammals. 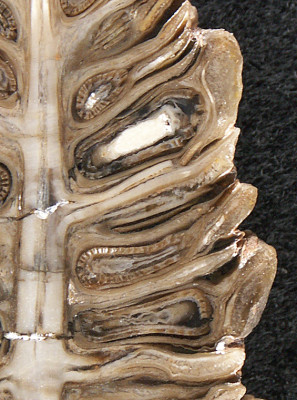 Cut away of a 150 million year old permineralized pine cone fossil which has beautifully chrystalized. In this type of fossil minerals deposits build up inside an organism and there is excellent preservation down to the cellular level.

There is a compression fossil on display of one of  the earliest known land plants (vascular plants)- psilophyton princeps, which thrived from 420 to 360 million years ago. The imprint of this ancient plant appears as like rust-colored arteries in the gray stone slab.

These plants had no leaves or roots. 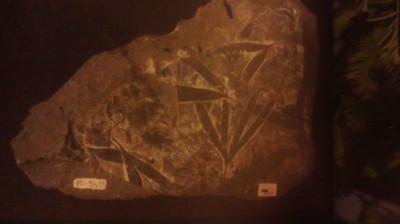 Fossilized gingko leaves. Gingko trees are called living fossils and tis speicmen shows how the basic anatomy of this species leaves have remained almost the same for 250,000,000 years.

The next major step in plant evolution, the rise of trees and forests 380 million years ago is represented by a piece of rock with the imprint of tree bark on it. The species is now called Lepidodendron aculeatum. These long extinct ancient forests have proven very useful to man in more recent centuries- as sources of coal – which is what they have turned into.. 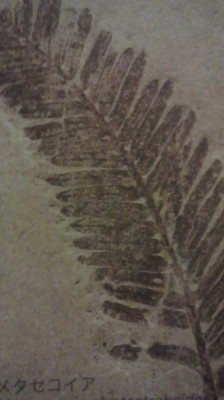 Metasequoias grew in Japan until about 800,000 years ago before going extinct. The species was discovered growing in a emote area in China in the mid-20th centurry and now the tree has been widely planted throughout Japan

Until about 390 million years ago, plants reproduced asexually( for example by releasing spores) Spore producing plants created spores of varying size、with larger one being called megaspores.. These would evolve into seed plants.. The first seeds plants produced their seeds along their branches. Two such plants (gymnosperms) are being displayed- a compression fossil of moresnetia sp. – elegant flowing lines, brown on gray, and Williamsonia sp. 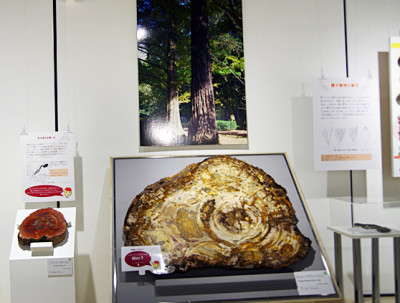 Petrified wood. The a sign-board asks you to guess how tall this extinct tree was.

According to exhibition catalogue, the oldest known fossil of a flower, dating from 130-140 million years ago was discovered in Israel. In Japan, as well, fossils of flowers, pollen and seeds have been found from later dates during the same Cretaceous Period. It was first during this period that our Earth began to bloom. 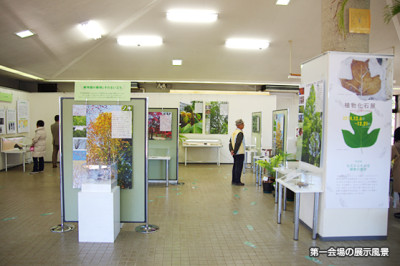 The part of the exhibition I hope they keep on permanent display is the small collection of fossils、conifer cones, and a piece of an elephant fossil – all discovered in the nearby (a few hundred meters behind the exhibition) Hanamuro River. 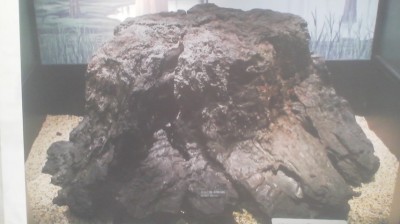 And best of all if you visit the fossil exhibition on one of these these bitter cold days- drop in on the tropical plant house- on the way to the fossils, on your way back, or like me- BOTH going and coming.

Step into the steamy, intoxicating air- memories of past visits to the tropics will come flooding through your head! 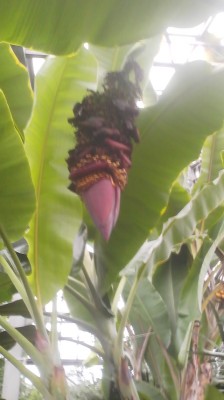 On cold winter days the Tsukuba Botanical Garden`s Tropical Palnt House is a welcome haven. Take shelter from the elements amid the intoxicating smells of the jungle- This week a banana tree is flowering 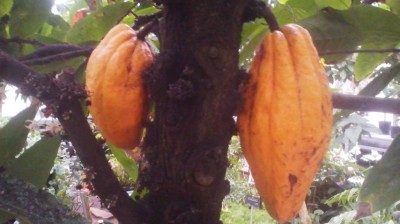 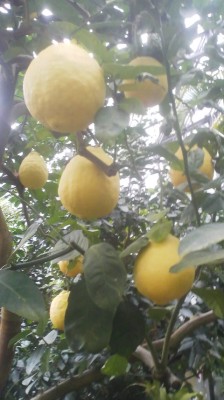 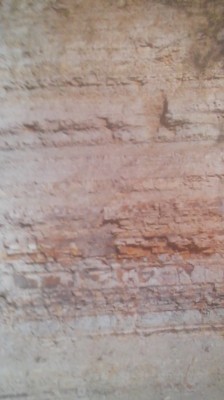 Fossils can be found in cliffs like this in Shiobara, Tochigi Prefecture。Note the clearly defined geological strata