The NIES Summer Open House was held on Saturday and it was a roaring success. (Am I allowed to say that about my own institute?) If someone invited me to an open house at a research institute, I would guess that I would be spending the day looking at posters and trying to catch the eye of the reticent researcher half hidden behind one of the panels. This was NOT like that at all.

First of all, there were gigantic bugs. 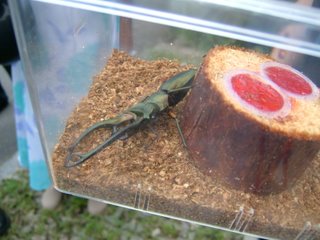 This picture shows a stag beetle. These beetles are extremely popular in Japan and children often keep them as pets. They can cost hundreds of dollars, and the more exotic they are, the better. The problem is that sometimes these exotic (i.e. foreign) bugs escape from their little cages and cause environmental damage. The NIES researcher who studies “invasive species” was happy to explain the details of this situation and answer our questions in English. It was really interesting to see all the different kinds of beetles. This was one of the most popular attractions at the Open House. 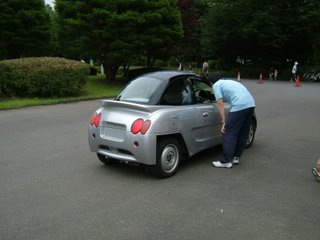 Then, there were cars. There were three different electric cars on display and two of them were all charged up and ready to be driven. Anyone with a valid license was given a chance to drive one of the cars around the circular driveway in front of the main research building. People were lined up for ages waiting for their chance to scoot around in these little two-seaters. 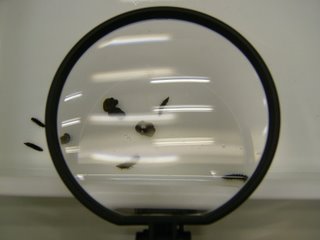 Oh, and did I mention MORE BUGS. This display shows larval fireflies. The researchers had set up a quiz for kids (and adults) to try to identify the various kinds of (living) bugs and worms around the room. This was also hugely popular with the kids.

In addition to these attractions, you could test your own DNA, play games like Karuta and Bingo, use microscopic cameras to photograph algae, etc. There was also a stamp rally (collect four stamps in a row and win a seedling) and lots of paraphernalia to pick up at each of the 16 buildings that were opened to the public.

I heard that about 5000 people came to the event, which is about 1000 more than last year. (About 20 people participated in the English tours.) The weather was perfect: not too hot and not raining.

If you didn’t get a chance to come to the Open House this year, I highly recommend planning a visit next year. While it is called an “open house”, I think a better description would be something like “festival” or “science amusement park”. Fun for the whole family.