Archive for the ‘Trains’ Category

The RINRIN ROAD, a Defunct Railway-Line-Turned-Cycling-Path Has a Floral Canopy in the Cherry Blossom Season 2 April, 2020 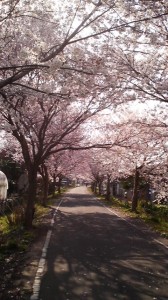 Once a railroad, the RINRIN ROAD is now a cycling path which is especially beautiful in the cherry blossom season

The opening in 2005 of the Tsukuba Express (TX) railway line linking Tokyo`s Akihabara and the center of what is now the Tsukuba Science City  brought about a surge in the number of visitors to Mt. Tsukuba which still seems to be growing-  despite the fact that the TX Tsukuba Terminal is more than a 30 minute bus ride away from the base of the famous mountain! 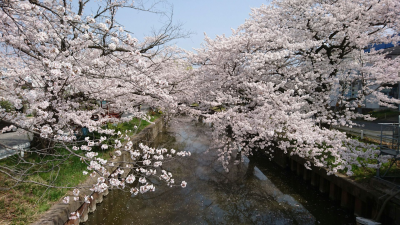 Interestingly, this was not the first time that the creation of a railroad has meant boon times for the Mt. Tsukuba Shrine and the various businesses ( restaurants, souvenir shops, hotels, etc.). In 1918, a similar explosion in the number of visitors occurred with the inauguration of the Tsukuba Tetsudo (筑波鉄道) Railroad, which ran from Tsuchiura Station ( with its wider connections to Tokyo and Hitachi via the Joban Line) and the town of Iwase, now part of Sakuragawa City, which had ( and still has) a station on the Mito Line. Along the way it stopped at what was then called Tsukuba Station ( in what is now Numata, Tsukuba)- at the very foot of the mountain! 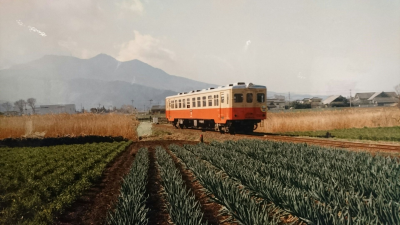 The old Tsukuba Tetsudo Railroad that started running between Tsuchiura and Iwase back in 1918, went out of service on April 1, 1987. The tracks were then removed and a cycling path, called the Rinrin road put in its place.

Besides bringing plenty of pilgrims and tourists to the sacred and scenic spot, the Tsukuba Tetsudo was used to transport many tons of locally produced goods, and also to convey students back and forth between their homes and the excellent schools in Tsuchiura. Back in the days when that city was thriving ( with its huge naval presence) the railway would also have been considered an important commuter line.

This meant prosperity ( in varying degrees) for the string of villages along the 40 km rail route which had stations- around which there had once been thriving shops and where real estate values were higher than in the surrounding countryside.

The good times reached their peak in the 1960`s. But after that, with the dramatic increase of private vehicles ( especially trucks of all sizes for tranporting goods), the Tsukuba Tetsudo just could not stay solvent. Its owners tried everything they could to keep it going- cutting the number of employees down to 62, using unmanned stations, selling specially priced tickets……… but alas……… nothing could prevent its demise. On the last day of March in 1987. local residents and business owners sadly watched ( or looked away) as the line was officially closed. 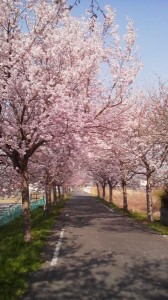 The RINRIN ROAD cycling path runs from Tsuchiura Station all the way ( 40 km) to Iwase, in Sakuragawa City

Eventually, after the rails and tracks were removed, a cycling ( and walking) path was created along the entire old route- except for a segment which was covered by a larger road at the Tsukuba City-Sakuragawa Border ( between the old stations of Kami O-Shima and Sakayori- which are now very beautiful old villages to visit!).

And to help make up for the loss of a local icon ( and I guess you could say that railroads are ICONIC of modern Japan in general), someone came up with the idea of replacing the trains with an even older Japanese icon- SAKURA (cherry) TREES!

With donations from local residents ( the names of donors are actually written on small boards on the trees) cherry trees were planted along many segments of the old rail-line- making the blossoming season a perfect time for cycling what is now called the RINRIN ROAD. 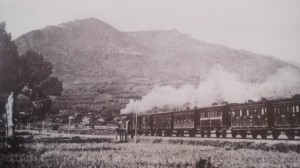 Since trains HAVE played such an important role in Japan`s uncannily rapid westernization and modernization, even defunct railroads and out of use railroad cars are treated with respect ( and even awe by this countries many train fanatics, known as TE CHAN). Not only canyou can see an old Tsukuba Tetsudo steam locamotive on display at the Railroad Museum in Saitama, but almost all of the original stations along the old abolished line still have their old platforms. 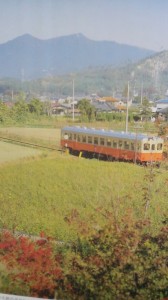 In the cherry blossom season, when the fragile blossoms fall away in full bloom filling the Japanese with an intense awareness of the inevitable passing of all things, these forlorn platforms to nowhere certainly add a special ( and appropriate) accent to the atmosphere.

It is also very fitting in this season that the end of the line is Iwase, which since classical times has been famous for its cherry trees. It is because it originates in a pond in Iwase that the Sakura River ( Cherry Tree River), which runs through Tsukuba City, was given its name.

Read more about Iwase and its connection to cherry blossoms and the Sakura River in a previous Tsukublog post: 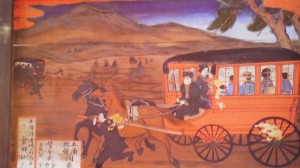 This painting, which was made as an offering to the Mt Tsukuba Shrine sometime during the Meiji Period, shows the horse drawn carriage service which brought tourists to Mt Tsukuba before the Tsukuba Tetsudo rail service was introduced

For those who enjoy the act of cycling in itself, the RINRIN ROAD can surely be a more than satisfying course ( which if done in its totallity round trip would mean 80 km of excersize). For someone like me who love to explore Japan`s old villages, however, there is never getting very far. This is because, the  old neighborhoods which once thrived around the stations- with their grand old traditional houses, old fashioned shops, and plenty of rustic temples and shrines- are so fascinating that they should really only be taken ONE AT A TIME. 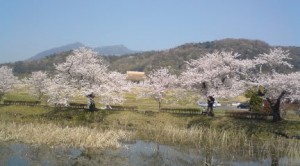 Besides the old villages, you have some other noteworthy spots to keeping you from forging on along the path. There is the HIRASAWA NO KANGA, a reconstruction of what was probably an 8th century government office ( perfectly beautiful with Mt Tsukuba in the background), the site of the old Oda Castle ( near Oda Station), and the Hachiman-zuka Kofun Burial Mound ( the largest ancient tumulus in the Sakura River Area) among others.

If you can`t get your bike to the RINRIN ROAD during this year`s cherry blossom season, dont worry. Its interesting at ANY time of year. The next great EVENT along the trail will be the flooding of the paddy fields which will turn most of the course duirng the month of May into a veritable waterworld- spectacular! 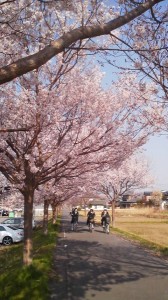 Cycling to school to begin a new school year 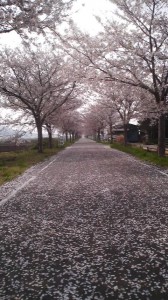 Fallen blossoms cover the surface of the RINRIN ROAD 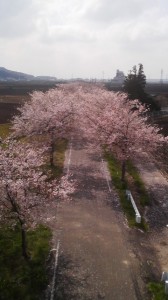 Looking down on the RINRIN ROAD from an overpass in Hojo, Tsukuba 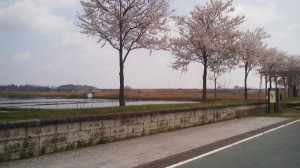 In 2005 the name of the old Tsukuba Staion was changed to Tsukubasan Guchi, so as to avoid confusion with the new TX terminal. Nearly all the other stations from Tsuchiura to Mt Tsukuba survive now as abandoned platforms used as rest stops for cyclists and walkers ( some of them even have toilets), do however retain their original names. From Tsuchiura Station you have: MUSHIKAKE, FUJISAWA and then TODABE. Then entering what is now Tsukuba City, you have: Oda, Hojo, Tsukuba-San Guchi. 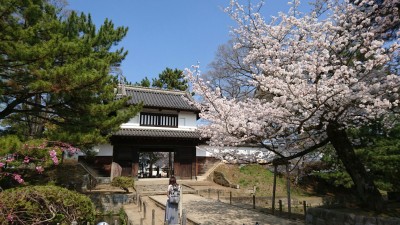 Cherry blossoms in front of the ruins of the old Tsuchiura Castle (Kijo Castle) MArch 28, 2018 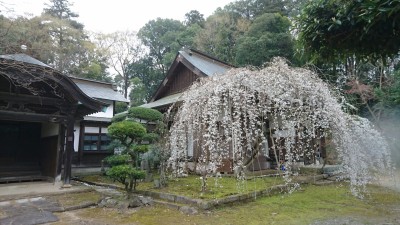 A magnificent “weeping cherry” at the Ho-un ji Temple (法雲寺), not far from the former Fujisawa Station on the Rinrin Road. Ho-un ji is a Zen temple of the Rinzai School (rare in these parts) – one of my favorite places in the Tsukuba area (though actually in Tsuchiura City) March 28, 2018

The cycling trail seems to be almost perfectly flat the whole way, so if there in no strong wind, it is pretty easy going the whole way. 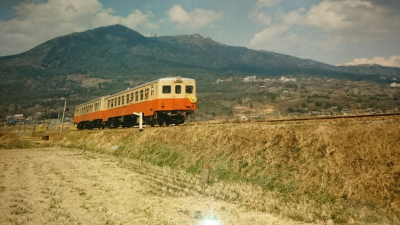 Comments Off on The RINRIN ROAD, a Defunct Railway-Line-Turned-Cycling-Path Has a Floral Canopy in the Cherry Blossom Season