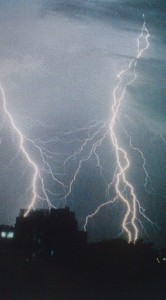 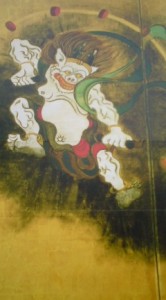 When I asked parents about this expression, besides telling me about Raijin and Raiju, they also explained the practical sides of this belief. One, that after lightning the air cools down (is this true?), so it is better to cover up, and two, that it’s better to stay low during a storm, and crouching down to conceal your belly is a good precaution to take. The efficacy of this second point was actually confirmed when I checked the established LIGHTNING SAFETY TIPS(www.lightningsafety.com/nlsi_plslst.html ).

The word for lightning itself is even more interesting. Inazuma (稲妻) literally means “rice plant’s wife”! The ancient East-Asian rice cultivators must have believed that lightning was a necessary element in the bringing about of rice. As if the gods, like Dr Frankenstein, used electric bolts to instill life into the inanimate!