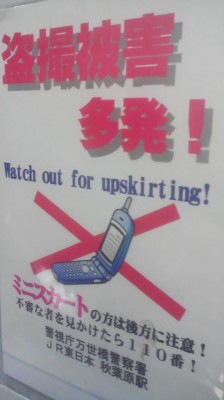 While riding the trains in Tokyo you might learn a new English word (or is it a Japanese-English original ?) – UPSKIRTING. I guess this can be defined as: the act of taking photos up the skirts of unsuspecting girls and women. To make sure you are never wrongly accused of it – keep your cell-phone safely in your pocket while riding on escalators !

While Japan impresses with its low rates of violent crime – and  near total absence of muggers,  it befuddles with its abundance of  highly-skilled con-artists and very freaky perverts. Let me save for a future post, the stories of the brilliant scams and swindles that have been run over the years I`ve been in Japan –  today I am going to focus on the sexual deviants – the peeping toms, the flashers and the panty-thieves and other nut-cases (some of them very scary!)

My first encounter with this aspect of life in Japan took place a couple of weeks after I had arrived in Tsukuba as a student. I had just moved off-campus, into a brand-new ground-floor apartment. But taking a shower one evening, I heard a noise. I turned and noticed a human silhouette- and a pair of eyes attempting to peer in through a small opening between the glass-slats in the window. I instinctively covered my private parts and let out a scream. With that, whoever it was ran off. Still, I quickly shut the window tight. It took a few minutes for my pulse to return to its normal rate- and even after it had, I was still shaken up. But, since I am a man – and not a very attractive representative of that gender at that, I am sure the peeper himself  got quite a shock- hopefully traumatized as much as I was. Serves him right.

And that was only the beginning. Ever since then I have heard a steady stream of stories – from Tsukuba University students (both foreign and native Japanese), and other members of our community: new-comers and old-timers- panties stolen from clothes lines, flashers exposing themselves in back yards, hidden cameras in strange-places, peeping-toms doing the strangest things to get a good look

The perpetrators in these cases are not kids playing pranks – they are very twisted (and probably dangerous) individuals. And unfortunately, the police rarely do anything about them, often not even writing up a report. 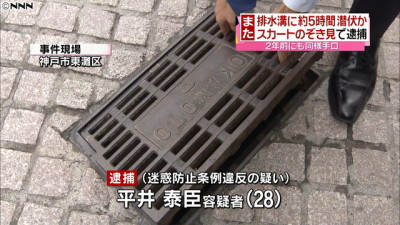 Yasuomi Hirai (28) crept down into this rain-gutter under a busy pedestrian walkway in Kobe at 3 AM and lay there for hours until the sun came up and a long while more before people started walking by.

One day I was in the passenger seat of my friend`s car when she said she had to stop by at the drugstore for something. She parked and went inside, while I waited in the car. A few seconds later, a school-girl in uniform parked her bike right in front of the car I was in. She went into the drugstore. Almost as soon as she had disappeared inside, another car pulled up next to the one I was in. Since it was a mini-car (kei jido-sha) and decked out with stuffed animals above the dash-board and against the back window, I assumed the driver was a young woman. But out from among all those teddy bears emerged a very suspicious middle-aged man. He didn`t notice me – if he had, he might not have proceded to do what he did. He went up to the girls bicycle (which was right in front of me), bent his face down to its saddle, and took a long, langorous sniff ! I cringed. He looked sinister in an almost cartoonish way. What was he going to do next. Nothing it seemed, since he got back in his car and drove off – so I thought that that was that. 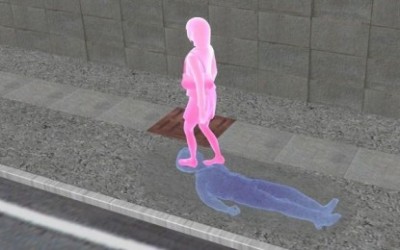 After his arrest Mr. Hirai told the police that ” When I`m re-born, I`d like it to be as a sidewalk”.

A minute later, though, the same man walked passed the car I was in and entered the drugstore – all he had done was to move his car! In a minute, there was consternation at the entrance to the store. Some customers seemed markedly upset. I got out of the car and went inside. The man was crawling around on his hands and knees like a dog- trying to look up the girls skirt. When she trade to move away, he would scamper – on all fours – after her, persistently trying to get a peak.

Since neither the Japanese customers nor staff took any action – I did. I shouted at him to stop. He ran. Out of the shop and towards his car. I followed. I watched him get in and drive off. I wrote down his licence number. He saw me with pen and memo-pad.

I went to the police-box in Matsushiro and told them what I saw. I tried to give them the licence number. They didn`t want to see it. The officer in charge told me that it couldn`t be helped. It was summer and all the girls were wearing provocative clothing. He thanked me, but told me to forget about it. 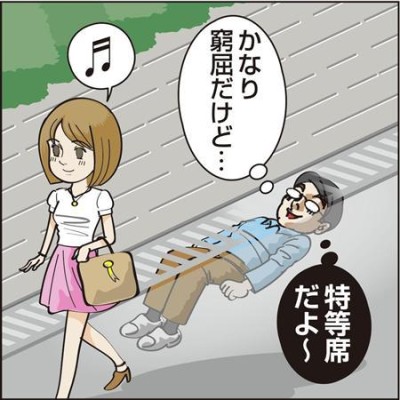 Bit of a tight squeeze…. but the best seat in the house!

Even if you are in Japan for just a short time, you can find evidence of the pervert problem in certain signs posted at train-stations. These warn who is not wearing pants to beware of “upskirting” – people who secretly try to take pictures up the skirts of unsuspecting women and girls. Arrests are reported regularly, with the perps often being “respectable members of the community”.

Last week while watching TV, I saw yet another case of “upskirting” reported – but this one took the art to a whole new level. A 28 company worker fit himself into a drainage-gutter during the night, and waited in the narrow and filthy space for hours – just to get some very fleeting (and partially obscured) glimpses of some panties !

What`s going on here? It`s time for Japan`s mental-health specialists to get to work ! And those of you living in or staying temporarily in Japan – beware and take care! Have you been to Akihabara? There are dozens of little shops selling high quality spy camera so tiny they could be secretly fit anywhere ! You might want to go to one of those shops and make a few purchases yourself – the devices that detect the spy-cameras. Yes, in Akihabara business is booming!

Comments Off on Japanese “Up-skirting” Taken to a New Extreme – if you`re not wearing pants, beware and take care!