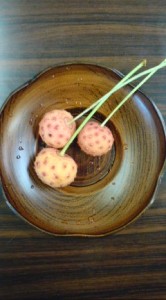 Because it’s early autumn, when Noriko Iwamoto told me that she had brought some fruit from her garden, visions of nashi (Japanese pears), grapes, and chestnuts danced in my head. What she pulled out of her bag, however, came as a complete surprise — a handful of what looked like small lychees or large raspberries – the fruit of the kousa dogwood tree, called yamabo-shi in Japan. Interestingly, this can be written either as 山法師 (literally: mountain monk) or 山帽子 (mountain hat), with the same pronunciation. I’ve also heard that some Japanese call it yamakuwa (mountain mulberry). 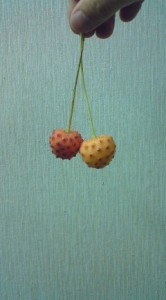 Most people don’t seem to know that this fruit, which grows on a very common  tree, is edible – and sometimes delicious. My friends and I cracked open the crusty shell and sucked out the guava-like pulp — mmm, a tasty treat indeed!

As do all trees of this type, Noriko’s kousa dogwood (also called a Japanese dogwood), blooms with a distinctive white ninja-star shaped flower in June and July, and bears fruit in September and October. In Tsukuba you can find these trees on the side of roads and in parks, as well as in private gardens. They can be enjoyed for their flowers and autumn foliage (a spectacular red), as well as their fruit.

While you are out collecting the ginkgo nuts which will be falling to the ground in greater and greater numbers over the next few weeks, keep an eye out for the Japanese dogwood and you can probably score a handful of the beautiful yamabo-shi for yourself. According to traditional Asian beliefs they have beneficial effects on the liver and kidney. You can also find some recipes for jam, liqueur, etc. on-line. 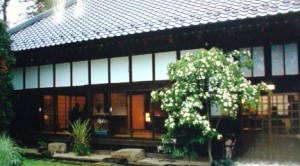