Looking Back on Mayor Kenichi Ichihara`s Years in Office : Misleading Displays of an Advertisement-Article Placed in the November 2010 Issue of NATURE (The Schizophrenia Issue) a Revealing Symptom of Tsukuba`s TWO-SIDED Nature 22 March, 2016 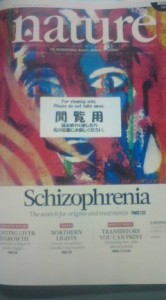 (On March 18th 2016, Tsukuba Mayor Kenichi Ichihara announced that he would not be seeking a 4th term – I am reprinting this article that I wrote in December 2010, as a way of looking back- and reflecting- on the way he has run the city)

Last week when I walked into one of Tsukuba`s Kominkan ( Community Centers), I was greeted by one of the staff there, as if he had being waiting for me arrive .

Instead of a usual greeting, what I got was an excited – ” Look what`s been published!”, while to my surprise I was proudly handed a set of stapled-together sheets of paper, which at a glance  I could see  was a color-copied version of an issue of the respected British science journal NATURE.

What stood out most about what I had been handed was the unusually striking cover illustration- which I instantly recognized as being what is called outsider-art, works of art created by patients diagnosed as being  mentally ill- and in fact, reading the heading, I saw that that particular issue, that of November 11, 2010, was a special on schizophrenia.

Now I realize that some must see me as being more than a bit strange, and I certainly AM moody, but I couldnt for the life of me imagine why I had been given with such a sense of urgency this specific material to look at.

I was then told that this internationally esteemed journal had published something about Tsukuba City. And since it was all written in English, my native tongue, it seemed that everyone there in the community center office thought that I would want to have a look. They also wanted to know what I thought of it ( since the text was written in English print so small and packed together as to discourage any of them from trying to read it).

When I opened to the first page past the cover, I saw that indeed there WAS an article about Tsukuba. I could not help but chuckle when I saw the  title- A TALE of Two Cities- and wondered if the writer knew that this article would be part of the schizophrenia issue- which made that choice of a heading seem so witty ( Get it ? Schizophrenia,……a tale of Two Cities?!). Could it have been an INTENTIONAL pun?

Leafing through the text I found that there were in fact SEVERAL separate articles on the Tsukuba Science City, with plenty of color photos ( with TWO pics of Mayor Ichihara!?), and all in all, it ran for quite a few pages. In fact, a large portion of the schizophrenia issue seemed to be devoted to Tsukuba!

“What is this”, I thought to myself.

Then I noticed written on the top and bottom of EACH page, in small print, ADVERTISEMENT FEATURE and NATURE MAGAZINE IS NOT RESPONSIBLE FOR THE CONTENT OF THESE ARTICLES.

When the expectant KOMINKAN staff , eagerly awaiting my reaction to the articles, asked me what I thought, I bluntly responded- “Its an advertisement”!

Maybe I should have used more tact, because they seemed to be genuinely disappointed, even hurt.  The way these texts had been presented to them by the city office, with an order to display them, they were led to believe that these were articles which  a famous magazine had to have written as a special feature on Tsukuba. In fact, the Japanese language explanation sheets which were provided to be part of the display at the kominkan merely said that an internationally respected journal had published a special feature on Tsukuba.

I could understand why they would be disappointed.

They were even more upset by the fact that these Tsukuba articles appeared in the special schizophenia issue ( they didn`t realize that until I explained it to them. And in fact, within the next couple of days the city had special covers printed up so that the original cover could not be seen! They did not want Tsukuba`s name to be connected with a mental disorder.)

I was a bit disturbed myself. Sure , I think its a good thing to promote  our city, and putting an ad in a journal like NATURE is probably good publicity. But why try to pass the advertisement off as a REAL ARTICLE. Why fudge the facts? For face? Did the mayor`s office imagine that the citizens of Tsukuba would  feel proud of such an article –  and as an extension of that, have positive feelings about the mayor?

What would be wrong with simply stating the truth – that a certain amount of public money had been spent on advertisements in Nature as part of a publicity drive? The ads could then be displayed to show the valiant efforts the Publicity Division  had been making.

But instead, the mayor is trying to pass them off as REAL ARTICLES!

Very strange. Especially when considering the fact that the ad-articles in Nature try to impress readers with the fact that Tsukuba is a city which embodies GOOD SCIENCE and scientific INTEGRITY.

Well one thing for sure is that FUDGING THE FACTS to try to look good does not mesh well with scientific thinking, or scientific ethics.

I mean, it`s hard enough for Japanese scientists  having to overcome all the various inherent obstacles to doing good science  which exist within traditional Japanese culture ( especially the sempai-kohai, senior- junior system which makes presenting new ideas, different from those of your teachers or seniors extremely difficult), without having a city government which acts with such little integrity.

I think City Hall should be setting a better example.

( but then again it would be difficult to explain why the taxpayers money should be spent for putting TWO photos of the mayor into NATURE. Maybe not the best move from a publicity point of view!)

This story illustrates just how great a gap there lies between the institutes and laboratories of the Tsukuba Science City, where great efforts are made to do real  and meaningful science, and the conservative Tsukuba City Government for which FACE and appearances are all important.

Yes, it apparently really is a Tale of Two Cities.

When I called the mayors office to ask how much was spent on the article ( and then changing the cover for display in Tsukuba) they said they could not tell me the sum at this moment! 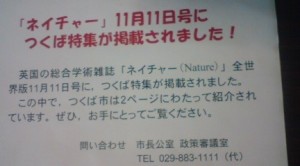 I also think that NATURE should be more considerate of its Japanese customers and more sensitive to Japanese culture. In Japan, people are very sensitive to connections and symbols. When something positive is being presented, there should be no negative or inauspicious symbols involved. Tsukuba City should have been informed that the very expensive advertisement it was placing would be in an issue dedicated to schizophrenia. If they had known that, I am sure they would have asked the  material to be printed on a different date. 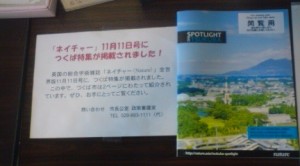 The advertisement-article on Tsukuba on display with a new, non schizophrenic cover at all community centers in Tsukuba