Archive for the ‘Videos’ Category

Hebi Ichigo – The Movie – a Well-Written, Well-Acted and Thought-Provoking Look at a TYPICAL Japanese Family that you might want to watch more than just once 5 June, 2009 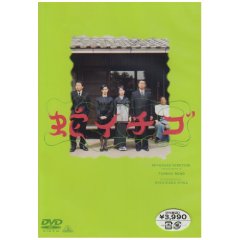 Sometimes just going with the flow and letting CONNECTIONS take you from one thing to the next can lead to exciting discoveries. This is exactly what happened the other day as I was preparing for a recent Tsukublog entry on the wild berries which grow so profusely in my garden. Doing the obligatory Google search, using the keyword HEBI ICHIGO ( the Japanese name of the fruit), I was dissapointed to find that most of the HITS that came up on the screen were not about the berries themselves, but about a Japanese MOVIE which has taken their name as its title. In the end I wasnt able to get much information online,but I could finish the research for my article at the library ( and by talking with some knowledgeable locals).Still, I was curious to see this movie, which I had never heard of before, and of course wanted to find out exactly what the HEBI ICHIGO of the title symbolically represented (if anything).
The next time I was at my local video rental store I remembered to ask for it, and- what do you know – they had it in stock. When I got home I popped it into the player and surprisingly found myself riveted to the tv screen for the next 108 minutes by this 2003 film about the undoing of a typical Japanese family (or should I say- a family, that like most Japanese families, wants to appear to be a typical one). I found the screenplay, camera-work, music, and especially the acting, SO GOOD that I watched it again, and then again (I had rented it for a week). In fact the movie HEBI ICHIGO turned out to be just as thought provoking as the berries themselves ( and for you, maybe even much more so!)!

I guess we could say that writer-director Miwa Nishikawa (Hebi Ichigo was her first film) might have been inspired or encouraged by Tolstoy`s proverbial comment in the first chapter of Anna Karenina- All happy families are alike, every unhappy family is unhappy in its own way. The Akechi`s, the family upon which the film focuses, at first appear to be one of those boring happy families, but little by little the director subtly reveals what lies beneath the picture perfect facade. I am tempted to give you all the details right here, but on second thought, I dont want to ruin the story for you.

I will say, however, that the film does explore one of the important root causes of family trouble (anywhere in the world, but maybe particularly in Japan)- lack of sincere communication. This, combined with a senile grandfather being taken care by a stressed-out daughter in-law, financial hard-times ( to say the least) and RESTRUCTURING, and a fiancee who seems not to be very much attracted to the opposite sex leads to some dramatic problems for the Akechi`s.

Once again I will say that the acting in this film is FIRST RATE (except maybe for the part of the grandpa played by RAKUGO artist Matsunosuke Shofukutei,which seemed more than a little FORCED but are traditional rakugo players EVER good in contemporary drama`s?) and I found each character well developed and fascinating to watch. Most impressive was the intense and skillful work of comedian Hiroyuki Miyasako, who has a powerful screen presence and oozes with energy (his comedy partner Toru Hatahara has a hilarious cameo role).

And where do the Hebi Ichigo fit in? Well, I watched the film three times and I have my ideas, but I dont want to impose them on you- yet ! Give the film a viewing and tell me what to think. Please keep in mind that real Hebi Ichigo (incorrectly translated in the English title as Wild Berries) do NOT grow on trees (can this be important for the plot?)

Im waiting for your opinions (the dvd has English sub-titles if you need them).

Oh, and if you are interested, here is a song I once wrote about people trying to look PICTURE PERFECT when there`s lots of trouble of bubbling dangerously up to the surface-

Comments Off on Hebi Ichigo – The Movie – a Well-Written, Well-Acted and Thought-Provoking Look at a TYPICAL Japanese Family that you might want to watch more than just once