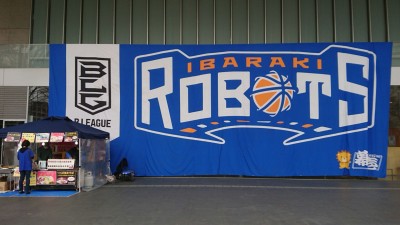 The old Tsukuba Robots are now the Cyberdyne Ibaraki Robots of the Japan B2 Basketball League !

Though they are no longer the Tsukuba Robots (I guess they couldn`t stay afloat financially based here), the Cyberdine Ibaraki Robots (now based in Mito, the prefectural capital) are still our home-team and its fun to go out and root for them the few times that they do still play at Tsukuba`s Capio Hall, one of their satellite home venues.

In fact, that`s what I did this past Sunday (along with about 1,400 other fans) as the Robots defeated the Kanazawa Samuraiz for the first time this season (by a score of 81-71), avenging their  76-81 defeat of the previous night and finishing up the two game weekend series with a split (and pulling the Robots record back to .500 at 17 wins and 17 losses). 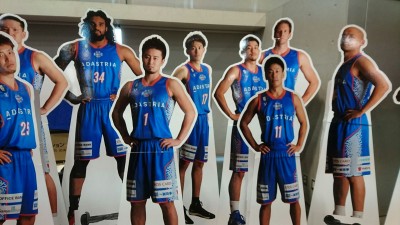 The team might have given up Tsukuba as its home base but there are still certain things that remind us of their roots – its name, of course, which is a celebration of its Tsukuba-based main sponsor`s specialty, robot-making (and a salute to Tsukuba being a city of Science and technology) and the fact that their scantilly-clad cheer-leaders perform on skate-board like Segues (Segues are also a symbol of Tsukuba). 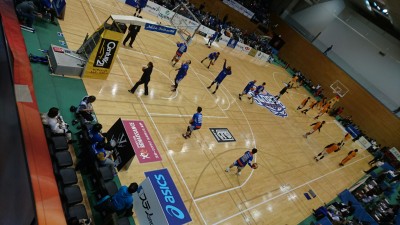 My second level seat cost a mere 1,500 yen and that included a complimentary pack of rice-crackers. This being Japan, there were naturally many “goods” on sale : T-shirts, jackets, sweat-shirts, hats, blankets, towels, refrigerator-magnets, cds, plastic mega-phones, foam-fingers, wallets, coffee mugs, year-books etc. etc. – mostly featuring  the team or a player`s name, but also with goods reading BE ONE – a reference to fans` hopes of the team getting back into the first division (the A League). 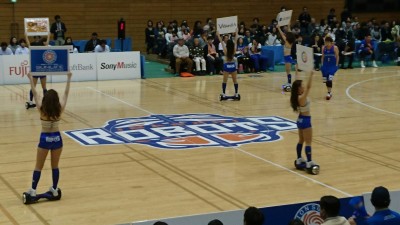 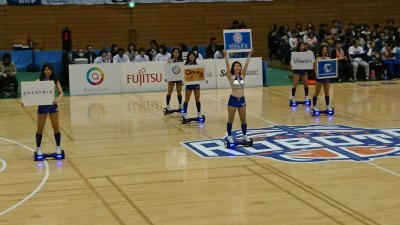 Cheer-leaders on Segue-skateboards give the game a Tsukuba Science City touch!

Besides the chance of seeing some extra-ordinary human specimens plying their trade the event offered some other entertaining bits. Many in the audience seemed to have bought tickets to see the cheer-girls who really put on quite a good show – and show quite a lot of skin as they do so.

It was also a rare chance to hear (and join in singing) the Ibaraki Prefectural Anthem ( who even knew there was one). Pure cheeeze – I will have to translate for you – keep checking this post for updates!

And those in the know would have noticed that the music played before game started was from the classic Japanese TV series Mito Komon, the music played when he reveals his true identity as the Lord of the Mito Domain. 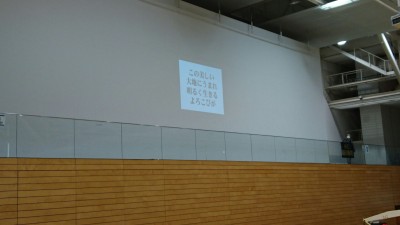 Lyrics to the Ibraraki Prefectural Anthem projected on the wall. Listen on utube.

I had come to root for the home team and along with everyone else I really got into it. Fortunately the team did not let us down that day, creating a comfortable lead, holding off Kanazawa`s attempts to get back into it, and finally letting the clock run its last couple of seconds out for the victory. 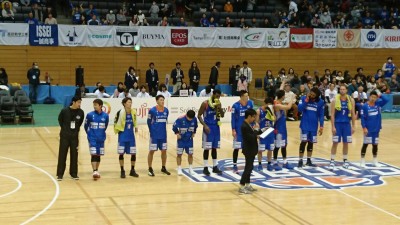 Award ceremony after the victory. I couldn`t help but feel sorry for those guys having to stand their like that – but I guess it`s a living.

All in all it was great fun… the only thing that put a dent in the experience was knowing that it would not be until April that the next “home-games” will be held in Tsukuba.