Tommorow (Jan. 12th) Should be a Perfect Day for OPENING THE HARBOUR ( ハーバー開き) at Tsuchiura`s Marinaー and a bit on Tsuchiura`s thriving past a hub of this area`s water transport 11 January, 2020 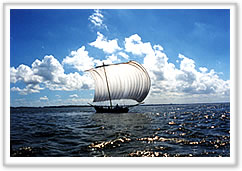 Lake Kasumigaura is Japan`s second largest and can be reached in less than 20 minutes by car from Tsukuba Center. A great way to get acquainted with this historically (and once culturally and economically) significant body of water, get on a motorboar,cruise ship, kayak, canoe or dragon-boat at the Lacus Marina Festival tomorrow January 10, 2016. If you are lucky you might be able to see one of these traditional HO-BIKI SEN fishing boats out on the water. 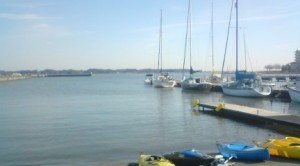 Clear skies and plenty of boats ready to be taken out on last year`s Opening of the Harbor Ceremony. It should be another fine day tomorrow (January 12th, 2020) for sailing, rowing, canoeing or speedboating on Lake Kasumigaura

(This is a reposting of my report of last year`s Opening of the Harbor Ceremony. This year`s will be held tomorrow, January 10th, 2016. Should be a nice day to get out on the lake!)

Traditionally, the Japanese have always made a fresh start in EVERYTHING after  New Year`s. In fact, this went so far, that in past ages all Japanese  were considered to have aged together by one year after the first day of the first month of the year ( even a baby which had been born a week earlier!).

The twin-peaks of Mt. Tsukuba – nd the Tsuchiura sky-line, as seen from out on the lake.

And though now there are INDIVIDUAL BIRTHDAYS ( though interestingly 20 year-olds still celebrate their coming-of age together as a group in January). as well as additional new beginnings such as the new SCHOOL YEAR and new FISCAL YEAR ( which start in April in Japan), all sorts of NEW BEGINNINGS are still commonly recognized and celebrated. 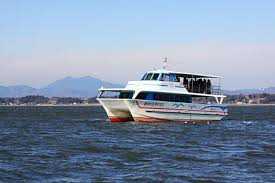 You can enjoy a short cruise out on the lake and also get on a kayak, row-boat, or other water-craft – all for 1,000 yen at the Lacus Marina Ha-ba-Biraki Festival.

There are special expressions for FIRSTS OF THE YEAR of almost every kind. There is even a special term for ones the first sexual act of the year- HIME-HAJIME! 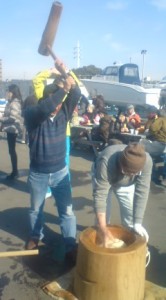 For the occassion rice will be pounded into MOCHI- rice cakes!

One FIRST-OF-THE-YEAR EVENT which has become a tourist attraction throughout Japan is the DEZOME SHIKI (出初式)- the first coming- out- of- the- year of Japan`s firemen- which can often be as spectacular as a circus, with traditional acrobatics performed atop bamboo poles, exhibitions of firefighting techniques ( including fire-hose spray shows), and  displays of new fire-trucks and equipment. Just about every city in Japan has a DEZOME, and as you can imagine they are especially attractive to families with small kids.

Well last year, I wanted to go check out the fire-fighters festival in Tsuchiura, which I heard usually culminated in a spectacular fire-hose show down by the Yacht Harbour on Lake Kasumigaura ( just in front of Tsuchiura Stations East Entrance). I had looked at a web-site that I usually use to get information about traditional events in and around Tsukuba, and found that the DEZOME in Tsuchiura would be held that morning.

We  hurried down to Tsuchiura with great anticipation.

When we got to where I thought the event would be held, however, instead of shiny fire engines and excited crowds we found only a few people lazilly fishing off the pier.

Naturally we were disappointed, and I kicked myself in the pants for not having CONFIRMED the time and place  by phone with Tsuchiura`s City office. It turns out we had arrived a day too late.

But sometimes stupid mistakes can end in great discoveries.

So while we had missed out on one FIRST-OF-THE-YEAR CEREMONY, we accidentally found ourselves at another one! 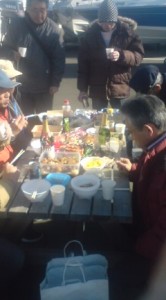 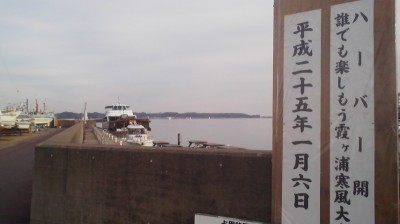 Driving a few hundred meters further down the waterside, we came to a fenced off area within which all sorts of small and medium watercraft were PARKED on land. At the gate there was a sign which read something like: LACUS MARINA ハーバー開き 寒風大会 誰でも楽しもう- meaning The Lacus Marina`s Harbour Opening- the Cold Wind Festival- Anyone Can Come and Enjoy!

Since fate seemed to have brought us to this place and also because the weather happened to be just perfect, we decided to take up the invitation offered on the sign and headed on into the marina. 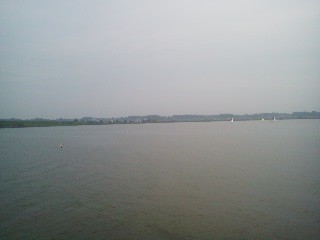 View of the surrounding area from the middle of the lake

For a thousand yen per person ( 500 for children) we were offered freshly pounded rice cakes ( omochi), and lots of other food and drink which was laid out on tables outside, free rides on all sorts of water craft ( motorboats, canoes, kayaks, and sailboats), and most importantly for me a taste of what it was like in the old days when WATER TRANSPORT had been such a vital part of like in this and other parts of Japan.

In this country,before the rise to dominance of railroads, and then later roads for automobiles, most goods were transported ( whenever possible) via waterways! In the Edo Period ( 1600-1868) , goods produced in the Tsuchiura area, most prominantly soy sauce, firewood, rice, and straw sacks, would be taken to Edo  by wind driven boats called TAKASE BUNE (高瀬船). On the return trip these same ships would bring back salt, sake, textiles, etc. This trip would take take anywhere from 3 days to a couple of weeks ( depending on wind and other conditions), and took the craft from Lake Kasumigaura to the Tone River, and then to the Edo River, before reaching its final destination. A different route would take the boats to the important seaport of Choshi (銚子), now in Chiba Perefecture, from where fresh salt-water fish and salt were brought to Tsuchiura. 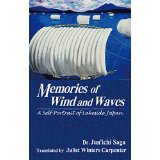 For getting a sense of what life was like on and around the lake in past until recent decades read the works of Junichi Saga – especially Memories of Silk and Straw, Memories of Wind and Waves and Remembrance of Village Days Past (the last one is in my translation)

(It might be surprising to you, but even goods from Mito ( even today about an hour by highway from Tsuchiura) were transported to Edo by water craft. They would travel down a series of canals (built during the Edo Period) until they can to Lake Kasumigaura. They would then take the usual rout to Edo until they could drop their goods off at the Mito Clans store-houses which were in Asakusa.)

Besides the ships used for transport there were all the various types of fishing craft ( from the days before the lake was closed off from the sea and fish and shellfish still abounded) , and the house boats in which people lived on all year round.

Also, after the fall of the Shogunate and the liberalization of travel, and before the completion of the Joban Railway Line, usual Tsuchiurans would travel to and from Tokyo by ship. Naturally, travel between the villages located around the lake was also done almost exclusively by boat. Almost all the boats on the lake remained those either powered by wind or oars until the Taisho Period (1912-1926) even though a few steam-powered ships were introduced as far back as 1891. The Choshi Maru steam-liner could shuttle passengers between Choshi and Tsuchiura in 8 hours.

This vanished world, so centered around the lake and so full of boats, is evoked tenderly in Dr Junichi Saga`s book Memories and Silk and Straw ( a book which I strongly recommend to anyone living in the Tsukuba area), and images from the stories told in his book floated across my mind`s eye that morning as I sailed off out into the lake and watched the modern city of Tsuchiura fade away in the distance.

From the boat I could see the newly renovated YOKAREN (予科練) Museum, which is a moving memorial to the young ( some, VERY young) men, who went off to die in SPECIAL ATTACK MISSIONS as so-called KAMIKAZE pilots. The reason that this museum is located on the shores of Lake Kasumigaura  is that it was on this lake that the many of the young pilots trained ( as did those who participated in the attack on Pearl harbour) because there was once a huge Navy Base in Ami Town, as well as a big naval presence in Tsuchiura. Though there still is ( a greatly reduced) SDF base near the lake in Ami, this strong military presence has also become  a thing of the past.( See my Tsukublog article on the YOKAREN MUSEUM here:

All the watercraft teeming with people and goods, the lake itself teemiing with fish and shellfish, the streets packed  shoppers and sailors, the hustle and bustle. All that lives on only in Saga Sensei`s books.  Drifting peacefully on the lakes still waters with only a handful of other boats in sight, all recreational, really drove home the sense of MUJOー （ 無常）, the fleeting nature of all things. 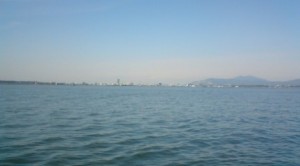 The city of Tsuchiura, as seen from far out on the lake. Mt. Tsukuba looms in the background

The marina staff was extremely kind and they patiently helped out anyone who wanted to try out the canoes, kayaks or sailboats.

They will hold similar events 3 more times this year:

On Children`s Day- May 5th

and  Sports Day ( Tai iku no Hi)- in October

If you would like to get a feel of what its like to get on the lake-  these days will provide the perfect chance.

The marina itself is also interesting in itself, as it is used by various groups to store their boats- the Kasumigaura High School Yachting Club, for example, which has developed many of Japan`s Olympic sailors, trains there.

One very strange thing for me at the marina, was the rarity having  a pleasant Lake Kasumigaura experience. It was nice to see so much bird-life freely enjoying the lake- since I have spent many hours freeing these same species from the nets which make the shores of Kasumigaura, at the villages of Okijuku and Tamura a veritable execution grounds for birds.

Here are some photos of past DEZOME in Tsukuba: 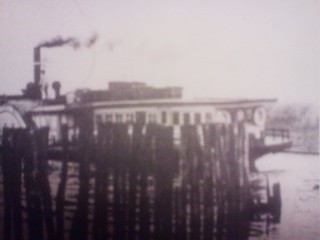 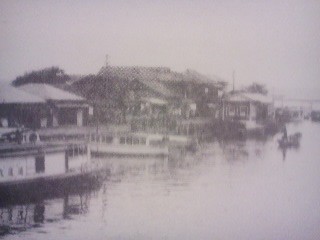 An old photo of the Yamaguchi Port (in Tsuchiura)