May Day in Japan (a Short History and a Look at Tsukuba`s May Day Demonstrations of the Past – as held at Chuo-Koen Park on May 1st) 1 May, 2021 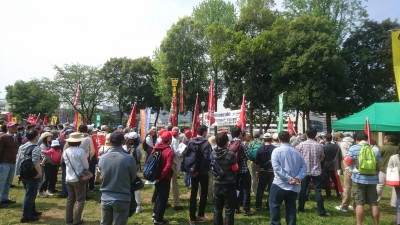 May Day 2016 at Tsukuba`s Chuo Park. A beautiful Sunday morning brought many families to the event. 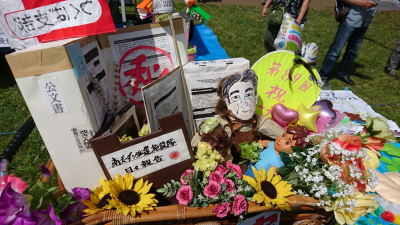 May first 2018 was unseasonably hot – but Tsukuba`s May Day demonstrators still came out in full force, many bringing clever posters and other works offering political commentary: This is a baby carriage for Prime Minister Abe , filled with all his mischievous scandals! 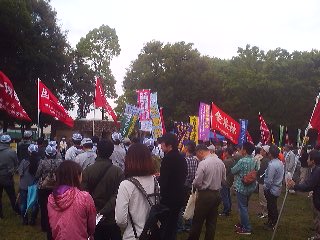 May Day 2014 in Tsukuba`s Central Park (Chuo Koen)- the rain let up just in time for the gathering- and the speeches- to get underway. You can observe (or join in on) this year`s demonstrations on the morning of May 1st at Tsukuba`s Chuo-Koen (across from the TX terminal) 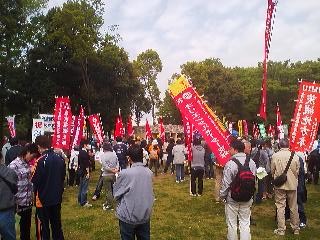 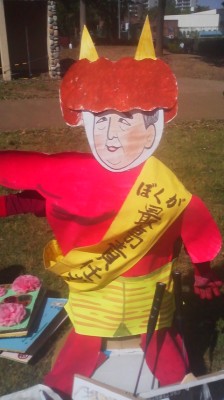 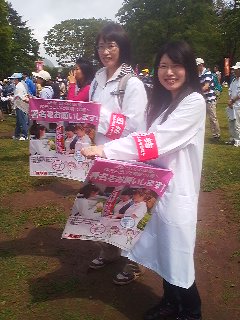 Ibaraki Prefecture has the second lowest number of doctors per person among Japan`s prefectures (Saitama is the worst!) These health-care workers are gathering signatures for a petition calling for in an increase in doctors, nurses and care-givers in Ibaraki (2014) 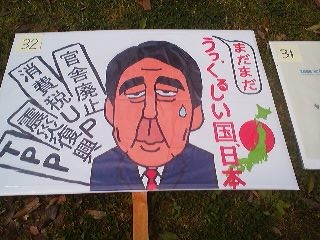 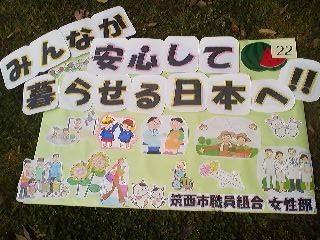 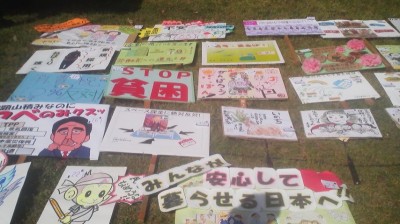 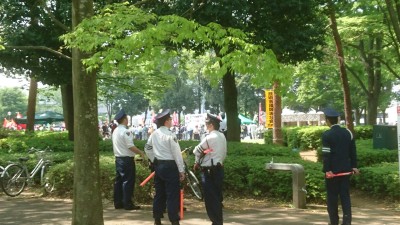 The police look on from afar – they are there to escort the parade. 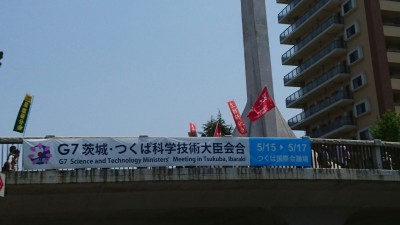 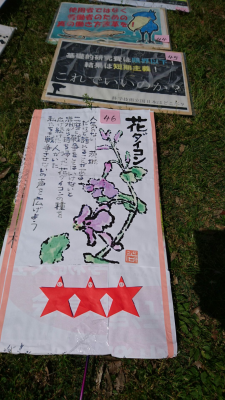 One of the more unusual and interesting entries I`ve ever seen at the annual May Day demonstration in Tsukuba. The title reads: Daikon Radish Flowers. The text then goes on to say: Ibaraki Prefecture is not very popular – but it has one thing to be proud of. A person who after the Second World War came back to Japan from Manchuria and planted daikon radish seeds that he`d brought back with him in the hope that there would never be war again. We are also doing our best to spread the call to end all wars.

Before heading straight on to work after I had gotten off the bus at Tsukuba Center, I thought it would be nice, in the short time I had to spare, to take a little stroll through Chuo-Koen (Central Park). I imagined myself basking in the fresh greenery of spring- but getting there I found instead a sea of red: with dozens of  slogan bearing banners fluttering in the wind ( along with one large impressive black flag). I  said to myself: Ah Hah- its May Day! 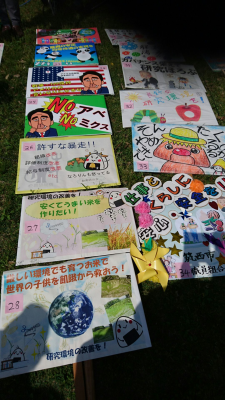 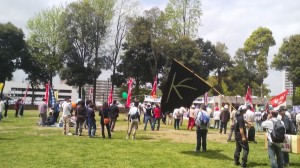 In 2012 what stood out most strongly amongst all the red banners was this large black flag with the character 不, meaning NO or NOT, written on it. It was being held by anti-nuclear activists who wanted to say that nuclear power (and weapons) were NOT needed and NOT wanted 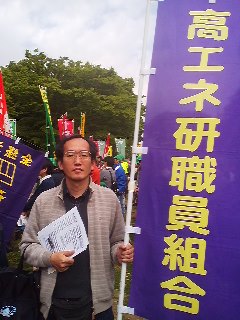 Radiation safety specialist Hajime Nakamura  representing the Labor Union which supports the employees of the High Energy Physics Laboratory whose wages have recently been illegally cut (2013) A group of employees has taken the Laboratory to court.

I immediately experienced a series of flashbacks to other May Day encounters I have had in Japan. Rallies of slogan-chanting, banner-bearing marchers around Tsukuba Center and huge gatherings I have seen from afar in Tokyo……. where were they?……..Hibiya Park? Yoyogi Park?……. I couldn`t remember for sure. And then there was last year- with large and passionate anti-nuclear demonstrations. 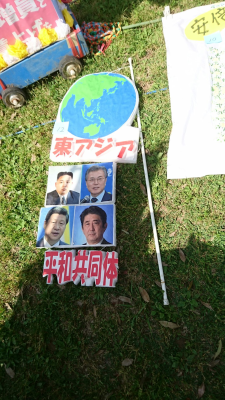 A call for East-Asian unity

Anyway, for someone like me who grew up in the United States, the words pronounced Mayday, Mayday, meant the- HELP, EMERGENCY- of the movies or television (  an expression which derives from the French- M`aidez!,), and did not signify the special day for pro-labor union rallies and promoters of various left-wing causes which it has in many countries of the world. 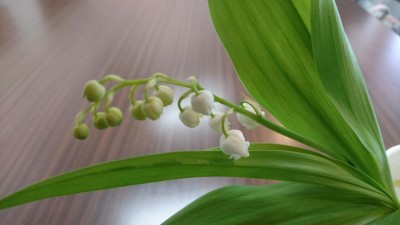 As one of the outstanding flowers of the season, the deliciously fragrant lily of the valley (suzuran, in Japanese) has been associated with May Day – especially in France where May 1 is apparently also called La Fete du Muguet – Lily of the Valley Day. These this was presented to me as a May Day gift – May 1st 2017 one group that joined today`s demonstrations.

The reason for my American unfamiliarity with this event is that the first day of May had become connected with the struggle for better working conditions as a world-wide reaction to a massacre of workers (and subsequent execution of other activists) by police on that same date in the year 1886- in Chicago Illinois, USA. The American government DID NOT want a Labor Day holiday to be connected with the memory of such an event, and thus established one (LABOR DAY) on the first Monday of September. In many countries around the world , however, May 1st has remained the official day of celebrating labor. 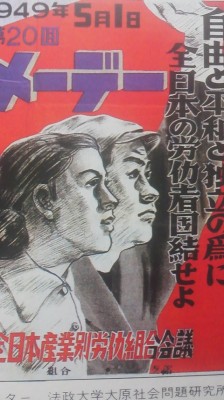 An old May Day poster

When I thought about it in the park today, as I listened to speeches (  last year mostly celebrating the end of nuclear power in Japan but this year focusing on the ills of  ABENOMICS and its effects on the average worker) and read banners (demanding better working conditions, nuclear disarmament, protection of the Japanese PEACE constitution etc.), I thought of how in Japan, as well, the OFFICIAL labor Thanksgiving Day ( a national holiday) is in November and NOT on May Day. Still, as the first of May is often a part of a company`s week-long Golden Week Holiday ( because of the existence of other national holidays at that time) many workers DO have a day off- or even better- a paid holiday. 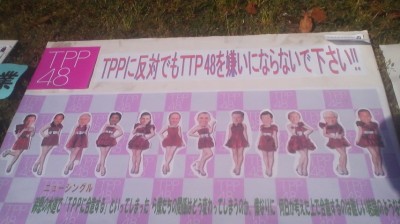 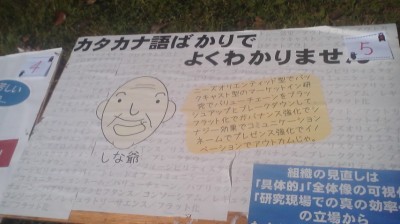 Even companies with no holiday on May First allow their employees who are representatives of their unions to take off and join the demonstrations. And since the weather is often fine on that date, there is no shortage of union affiliated people who want to get out of work for the day for a little spring outing. 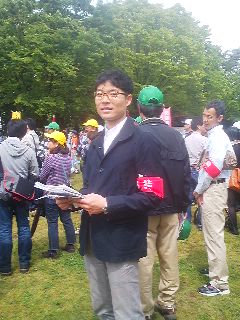 The History of May Day in Japan

The first May Day demonstrations in Japan were held in Tokyo ( Ueno park) in 1920. That year workers and leftists ( about ten thousand of them) gathered on may second ( which was a Sunday). There were demands for an 8-hour work week and government action to do something about unemployment. From the following, the rallies have been held on May first.  Between 1936 and 1945, however, due to the climate of intense nationalism, militarization and right-wing violence- May Day demonstrations did not take place.

When the WWII had ended Japan was in physical and economic ruin- a perfect breeding ground for labor and left-wing activism. In 1946, after an 11 year hiatus, the May Day rallies returned to Japan- and with a vengeance. In that year more than a million people around the country joined in on some form of demonstration. About 50,000 of these gathered in front of the Imperial Palace in Tokyo.

Seven years later, just after the American occupation had officially ended, what are probably the most notorious May Day demonstrations were held. In fact, 1952 is remembered as the year of the Bloody May Day in Japan (Chi no Medei, 血のメーデイ). Protesters who were all riled up in their opposition to the terms of the San Francisco Treaty ( which had been signed in the previous year) tried to enter parts of the Imperial Palace which were off-limits. The police used tear gas and live ammunition. There were many casualties: Among the police there were 750 injured officers- 80 of them serious. On the the demonstrators side there were 200 injuries and one fatality. More than a thousand arrests were made. 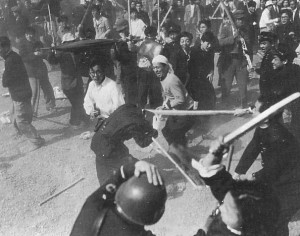 As May Day demonstrations continued to take place over the years and Japan`s labor unions continued to grow more and more powerful with the 1970s being their Golden Age. Since then there has been a precipitous decline in union influence ( in all the years I have been here in Japan I cannot recall there having been even one strike), but May Day events have still been held across japan each year and there have been calls by certain labor unions to make the day an official National Holiday. Hasn’t happened yet, and might not ever…….

Last year (2014), was Japan`s 85th May Day and the folks who I found gathered at Tsukuba`s Central park were not merely gloating over their success (aided by the huge nuclear disaster of last year- which had the nuclear industry crying Mayday, Mayday!) in ridding Japan of all nuclear power plants. There were various groups who are working to fight for what they believe are the most important issues facing the country- health-care, education, child-care, elder-care, the pension system, keeping Japan from remilitarization, nuclear disarmament and world peace.

As I have already stated above, this year on May Day no. 86, there was more emphasis on the policies of the current Abe Cabinet and on the economic policies which have been dubbed ABENOMICS. Since a part of this policy appears to be RESTARTING several nuclear power facilities, there were several speakers and placards dealing with that issue.

I would like to write some more about the fascinating story of May Day in post-war Japan and to describe some of the groups that I encountered at the May Day Rally in Tsukuba today ( and the opinions they expressed)- but alas, I am just too tired ( I have NO paid holidays!) to go on tonight…….. 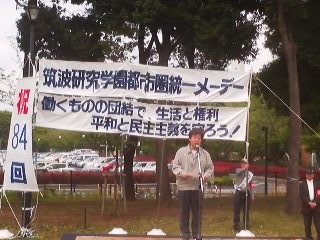 One of the day’s numerous May Day speakers (at least 20!). This is a representation of the Labor Union at the High Energy Physics Laboratory whose members have filed a suit against their institute for illegally cutting wages 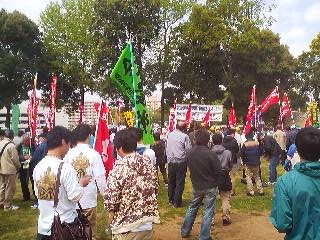 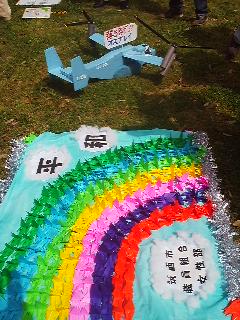 Various placards and sculptures were created for the event and there was actually a competition for best work: the model helicopter (very skillfully made was part of a protest against the U.S, military`s deployment of Osprey Helicopters on Japanese soil 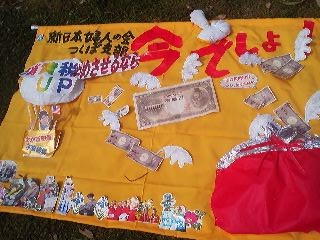 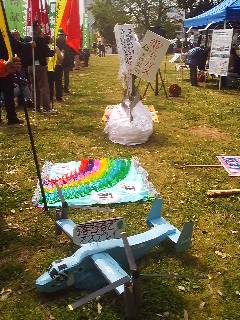 Another view of the poster, collage and sculpture competition 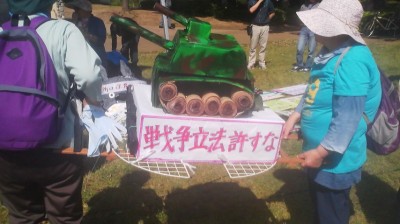 Anti-war activists at the May-Day demonstrations in Tsukuba (2015) 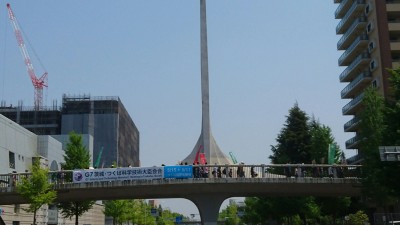 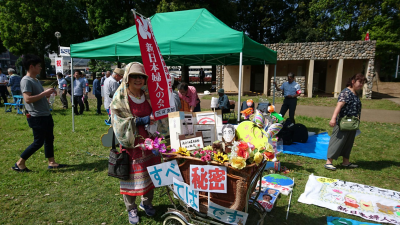