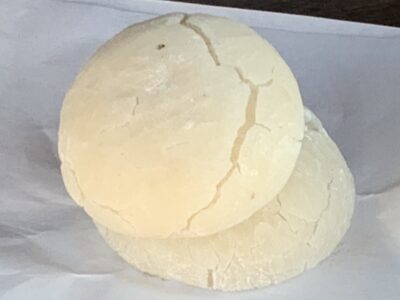 A week after being set out in the open, the New Year’s Kagami-Mochi rice-cakes often crack like this – especially in the Kanto Region where the winter air is very dry (at a roadside shrine in Shimana, Tsukuba, 2021) 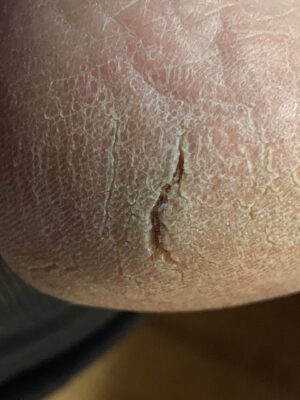 Sorry for the graphic picture, but this is what happens to some peoples’ heels during Tsukuba’s (and the rest of the Kanto Region’s) cold and very dry winters. Just like the the rice-cakes (shown above) they develop deep, cracks, which make it excruciatingly painful to walk and give a wide opening to all sorts of bacteria. Make sure to keep your extremities moisturized so that this doesn’t happen to you!

By blocking off most of the moisture carried by the seasonal winds which blow towards Japan from Siberia each winter, the high mountains that run down the center of Honshu, Japan’s largest main island, create two unique micro-climate zones.

On the west side of the island (the Japan Sea side) , where all the wetness is siphoned off, they get some of the deepest snow in the world every year (certainly THE deepest in the world for any highly populated area).

And then, on the eastern side of the mountains, the Pacific Ocean side, we end up with a very dry wind, which the Japanese call the KARA KAZE (空っ風)* which means very little snow ever falls and the air is usually very clear (with excellent visibility).

Naturally, these climatic and environmental differences have greatly influenced the lives of the people who live on either side of the mountains. On the Japan Sea side they have had to, of course, cope with copious amounts of snow every year.

And while life in winter is MUCH more convenient**(though less beautiful) on the Pacific side (though when even a little bit of snow DOES fall everything gets paralyzed, with people unaccustomed to driving in it) and the far greater part of the population lives on that side, the distinctively dry air does create certain inconveniences, problems and challenges.

I have already written about the higher probability (especially for certain people) of getting a static shock.

And then of course, there is the greater risk of fire, and if there is one, of it quickly spreading (which was why disastrous large-scale fires were so common during Japanese winters in past ages) .

There are also health problems and challenges:

The dry air makes pathogens such as the various flu viruses (and the corona virus) more communicable.

Also, those of us living or staying on the Pacific side of Japan (especially the Kanto Area) during the cold, dry winter are susceptible to SHIMOYAKE (chilblains, in English) – swollen, itchy and sometimes painful fingers and toes.

And even worse (and far more debilitating and potentially dangerous due to risk of infection) is when the continuously dry air causes your heels to crack – creating fissures which grow deeper with the season and with more walking. This ailment is called AKAGIRE in Japanese. 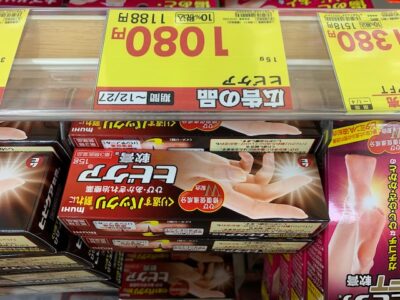 Hibicare (ヒビケア) – for fast and effective relief when you heels need healing (no, this is not a paid advertisement!) At any drugstore in Japan.

The good news is that if you do notice that your heels are starting to crack, or if you feel pain in them as you walk, all you have to do is go to the nearest drug store and ask for HIBI CARE (pronounced HIBI KEH A-) . While it will set you back a little more than a thousand yen, it will cure you, as if by magic, over-night. Believe me… I use the stuff every year! 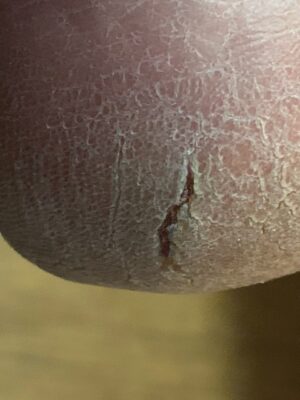 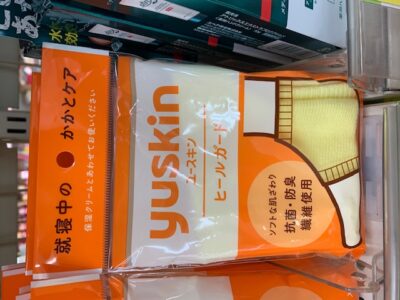 You can also get these socks, specially designed to protect or heal your heels!

* On a more local level, the dry and frosty winter winds that sweep across southern Ibaraki Prefecture (and neighboring Chiba Prefecture is known as the Tsukuba Oroshi – and it makes those of us who get around on foot or by bicycle thinking that March is the coldest month of the year (while in actual average air temperature, it is not).

**Besides the obvious fact that it is easier to get around without snow on the ground, the dry air also makes it much easier to practice certain sports (i.e. baseball) all year round, and (very importantly) dry laundry ( by far most Japanese prefer drying their clothes out in the sun). The unique dry winter wind also led to the development of a rich culture of drying foods for preservation ( involving a wide variety of seafood, fruits and vegetables).