Archive for the ‘Children’ Category

A Lesser Seen Japanese Rite of Passage: O-KUIZOME ( お食い初め), in which, besides the baby, A ROCK is the STAR! 9 January, 2019 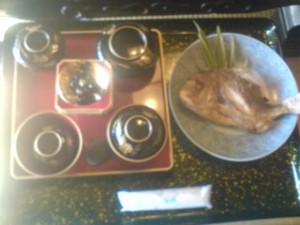 Being a parent involves  almost constant concern  over children`s health and  development. Even in these days of relatively advanced medical science and easilly accessible health care, parents sigh in relief at the passing of each flu season and each epidemic scare. It is hard to imagine what is must have been like in past ages.

That it why it is only natural that parents, no matter where in the world, celebrate their childrens growth, and that traditionally there have arisen ceremonies and rites meant to provide children with a little extra, one could say MAGICAL assistanc, in their road to reaching adulthhod in health and safety.

In Japan, with its great tradition of festive decoration and dress ,  certain rites and celebrations related to age have become a  popular subjects for photographers, professional and amateur, and pictures of these events, especially SHICHI-GO-SAN ( in which children 3, 5, and 7 years of age, dressed in traditional wear, visit shrines with their parents) and Coming of  Age Day ( in which 20 year-olds, often wearing kimono gather to celebrate), can often be seen in posters, guidebooks, coffee-table books and magazines, as in the photo album of many tourists who have visited Japan. Even if you dont have a camera, having a look at these events is an unforgetable Japanese encounter.

and Coming of Age Day: http://blog.alientimes.org/2009/01/tsukubas-coming-of-age-ceremony-seijin-shiki-proceeds-almost-without-incident/ 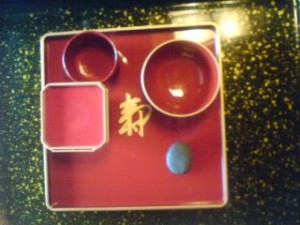 The fact is though, that most of Japan`s numerous age related ceremonies and celebrations ( and there ARE many of them!), are NOT so easilly or often seen by foreigners, either tourist or resident. One of the most interesting ( and popular, for Japanese families) of these, is the ceremony which is usually called O-Kui zome ( お食い初め, literally FIRST EATING), and  takes place when a baby is about 100 days old.

Let me tell you about it.

The Okuizome ( pronounced O kui zoh meh) , is a ritual feeding , in which various foods, usually rice, fish and vegetables, are put against the babies lips with chopsticks. Interestingly, something else besides food is touched  to the babies mouth and gums- A SMOOTH, ROUND, STONE- which among other effects, is supposed to help the childs teeth and head properly harden.

There are records of this custom having existed in the Heian Period ( 794-1185), and thus it has been around for at least a thousand years. In the earliest references it was called MOMOGA NO IWAI ( 百日祝, meaning the One-hundredth Day Celebration). By now it has spread and is practised throughout Japan, though naturally with plenty of regional variation.

In Tsukuba, at least in some of its neighborhoods, the kuizome is held on the 110th day. In other area it is on the 100th day or the 120th. Anyway, generally speaking, the ceremony is held at AROUND the 100th day, and the most convenient day for relatives to gather ( probably the weekend) is usually set for the occassion. 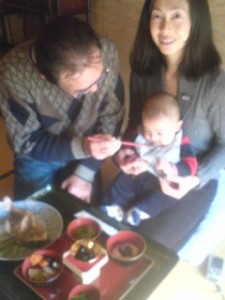 Each food, and the stone is ritually put to the babies lips and gums

Though the kuizome has traditionally been and is still usually held at home, these days, busy families might reserve a room at a traditional Japanese restaurant. In Tsukuba, Ichinoya, a restaurant which caters to a wide assortment of traditional celebrations, offers special Okuizome packages.

Though it is alright to use everyday household dishes, for this occassion, most families buy a special laquer tray and bowls ( there are different colors for boys and girls depending on the region), and a pair of chopsticks made from the wood of a willow tree.Naturally, those celebrating at a restaurant save themselves the trouble of having to prepare these things themselves.

As for the foods required, the essentials are:

A fish ( usually the celebratory TAI, sea bream), which should have its head and tail still attached ( this symbolizes strengthening of the neck)

Beans ( these represent loyalty and diligence since the Japanese word for beans MAME is a homophone for these virtues).

Boiled vegetables ( usually seasonal, and might include some kelp ( konbu), whose Japanese name reminds one of the word yoroKOBU – to be glad)

and of course- rice. Either plain white rice, or the celebratory sticky rice called SEKIHAN.

In Tsukuba, it is traditional to include UDON noodles among the kuizome dishes, as it represents LONG LIFE.

The stone or stones ( depending on the region), which should be small round, smooth and flat, can be either taken from a riverbank ( and washed!), or gotten at a shrine. Especially at the shrine where the baby had its MIYAMAIRI ( first visit to a shrine), when it was about one month old. Again, reserving a restaurant saves one the trouble of finding or getting the stones!

The ritual meal ( of course the babys are too young to actually EAT the foods), is an expression of the hope that the child grow to enjoy a wide variety of foods and that he/she never go hungry.

Though there is variation from region to region a common order of fake  feeding would be: rice, soup, rice, fish, rice, vegetables, rice, beans- repeated three times. Some families might actually put ONE GRAIN OF RICE into the childs mouth

The rice could  be said to be a symbolic ENERGIZER put to the babies lips to provide him/her with a dose of LIFE ENERGY.

Finally, the stone is  put to the lips and gums. As I said, this is done in the hope that the child`s teeth will grow strong, his/her head and neck frim and solid, and spirit strong .

The stone is also intended  as a spiritual energizer in that it can be considered to be a YORISHIRO （依代), a receptacle or antennae for receiving the Goddess of Childbirth- the UBUGAMI ( 産神）. The round shape of the stones reflects the shape of the mirrors found in shrines ( like that which attracted the Sun Goddess Amaterasu) and in turn the Kagami mochi ( mirror shaped rice cakes used to attract the God of the New Year) eaten at the beginnig of the year for spiritual re-invigoration.

Usually, the person chosen to do the ritual feeding is a grandparent ( the same sex as the child), or the oldest available relative, as having an aging person perform the ritual was thought to guarantee long life to the child.

Naturally, all the relatives ( and or neighbors) who attend, enjoy lots of eating and drinking! All in all, its a charming and delicious way for a family to get together and celebrate a child`s 100th day!