Plenty of BLUE BLOOD passing through Tsukuba’s Main Arteries once again – bringing back memories of Imperial-Royal visits past 29 November, 2017 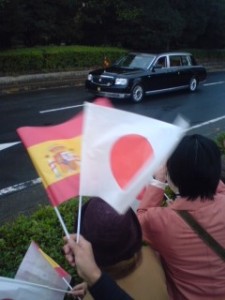 Back in November 2008 Japan Emperor Akihito and his wife Empress Michiko visited Tsukuba with the king and queen of Spain. I was reminded of that visit today as I wathedc Their Imperial Majesties driving through Tsukuba with the King of Luxembourg and his daughter. 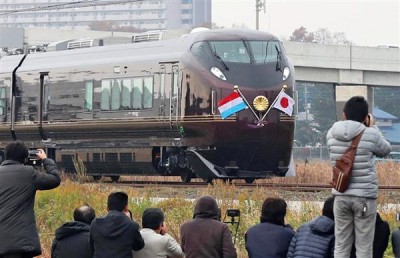 Much to the delight of Japan`s TECHAN (railroad fanatics) the Imperial Train (Omeshi Resha) was brought out to carry the Emperor and Empress, along with Grand Duke of Luxembourg and his daughter to Tsuchiura Station (the Grand Duchess had to cancel her visit for health reasons) November 28, 2017 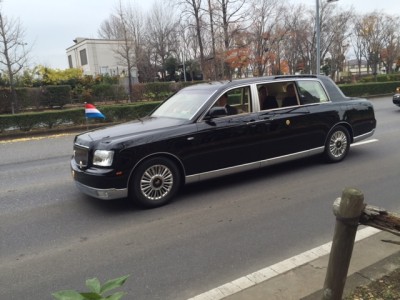 Emperor Akihito and the Princess Alexandra of Luxembourg coming up the Tsuchiura-Gakuen Road on November 28, 2017. They arrived in Tsuchiura by the Imperial Train – the Omeshi Resha-, enjoyed a drumming performance at the site of the old Tsuchiura Castle, and then came to Tsukuba for a visit to JAXA, the Japanese Space Center. 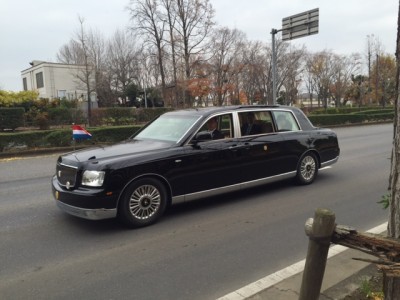 Watching Henri, Grand Duke of Luxembourg passing by seated next to Empress Michiko brought memories of previous Imperial encounters rushing through my head – and I decided to repost this article I wrote nearly ten years ago

A few weeks ago I was surprised to see that there were policemen at each corner of every intersection along Higashi-Odori (one of Tsukuba’s main thoroughfares), for as many kilometers as I would travel down it. Each of these officers had a little decoration on his shoulder, so it was clear that this was VIP related. Since I had read that Prince Charles was in Japan on that day, I assumed that he had made a surprise visit to Tsukuba. 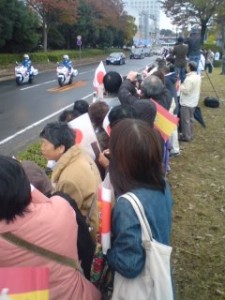 Well , it turns out that the Prince of Wales never did come to Tsukuba. However, I was not very far off the mark. Royalty, was in fact coming, and in heavy doses.  What I had seen was merely a dress rehearsal. There would be still more rehearsals (not only for the police) after the one I had seen — because this was going to be MAJOR == the Emperor and Empress of Japan (representing the longest continuous dynasty in the world) would be visiting Tsukuba. This in itself would merit a rehearsal or two, but putting more pressure on security services and Tsukuba City officials, they would be bringing along two very special guests, also of very ancient lineage: the King and Queen of Spain. (The King is a successor to the Capetian Dynasty which is the oldest in Europe. He is a descendant of Charles V, Louis XIV and Queen Victoria, among others.)

Though we have had a Nobel Prize winner or two among us, since the Tsukuba Expo of 1985, when a whole slew of world leaders and royalty whipped in and out of town, there have been few such occasions to excite our local royal and celebrity watchers.

I was surprised to learn (since I come from a very security conscious country) that a detailed itinerary of the visit was released in advance, and even more surprised to eventually find that it was followed, to the minute.

The plan to visit Tsukuba certainly came about due to a shared interest on the part of the Emperor and the King in science and technology. But by this I do not necessarily mean the space and robot technology that they would be shown at the Tsukuba Space Center or at Tsukuba University. It seems that the planners of this trip took into consideration both monarchs’ particular affection for a more classic technology — TRAINS! (I was glad that Juan Carlos was not taken to indulge in one of his favorite pastimes: BEAR HUNTING!)

The two couples would be setting out from Ueno Station after having boarded the Imperial Family’s new PRIVATE TRAIN, several cars long, which would let them off at Tsuchiura Station. Later, they would be going back to Tokyo by TX (with the whole train specially reserved, of course).

The day of the royal arrival was dark, drizzly and a little cold. This did not deter lovers of the Imperial Family from waiting by the road, for an hour or two, at various locations along the route of the Imperial procession, so that they would be able to watch as it passed by. They came, mostly women over 60, by the busload (many of these women also volunteer, at no small personal expense, to clean the grounds of the Imperial Palace every year — the subject of a future entry). 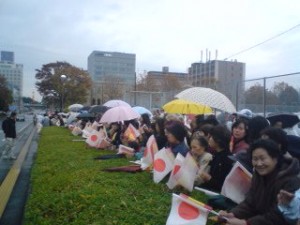 However, with all the blue blood seated in their specially made limousines, these women were mostly interested in catching a glimpse of a commoner. Of course, I’m talking about Empress Michiko, the first woman of non-aristocratic lineage to marry into the family of the Sun-Goddess. I have found that many Japanese, again, usually women of a certain age, are deeply moved by what they consider to be Michiko’s kindness, patience, concern for the people, and beauty.

(I have my own Michiko moment. In Tokyo, on another drizzly day near the Empress’s alma mater, Seishin, we found a street lined with policemen. I asked what was going on, and was told that Michiko would be passing by soon, on the way to a class reunion. We asked if we could wait and were told that by all means we could. A plain-clothes officer then proceeded to talk into his radio. I couldn’t overhear him, but I assumed he was reporting our presence for security. I was wrong, however. He had informed the procession that some foreigners were standing and waiting outside in the rain to greet the Empress. Anyway, I guess that is what he said, because the car Michiko was in (in the middle of a convoy, of course), came to a near halt. The window then rolled down and we were given a very elegant nod by Her Majesty. I’m almost embarrassed to say that it was a MOVING experience and that I’ve had a special feeling for the COMMONER EMPRESS ever since.)

I had no particular plan to watch the processions, but as it turned out I was able to see both couples clearly, on at two different times of day, as they slowly drove by, waving to the crowd from open windows. I was also able to snap some pictures with my cell phone camera, which by shear luck (I held the keitai high over the crowd and shot at random) captured the moment.

An important impression which remains after any imperial sighting of this sort is the sheer sense of thrill in the air — exuded not only by the older women who had come by chartered bus, or by the few 30-ish, male amateur paparazzi (though they seem to be just ardent fans of the Imperial Family) mounted on tall step ladders with very long and expensive-looking telephoto lenses who proudly show off their shots to the excited ladies after the procession has passed (to cries of “Michiko’s face really IS kind and gentle”), but also the local policemen who show genuine emotion which lingers strongly even after the royals have been long gone. They bow, to the well-wishers and give an emotional thanks to all those who came out in the bad weather – ARIGATO GOZAIMASHITA!

For me, this double royal visit was less thrilling than thought provoking. Of course ,one cannot be but baffled at what makes blue blood so captivating for the public in this day and age. I would recommend reading a little about Juan Carlos- http://en.wikipedia.org/wiki/Juan_Carlos_I_of_Spain

and the current Emperor of Japan

and then tying to imagine what they spoke about sitting side by side during the train rides from Tokyo and back.

The visit also gets one to reflect on the history of Japanese-Spanish relations,which go back to the16th century.  Spain in fact  had  an immense impact on the course of Japanese history. It was distrust of the motives of the Spanish and the missionaries who came with them (fuelled of course by the opinions of the Dutch and English), which led to the banning of Christianity, and the more than 200 years of National Seclusion(sakoku) which followed http://en.wikipedia.org/wiki/Sakoku .