Young Women in HAKAMA Means it`s GRADUATION SEASON in Japan- But why HAKAMA and not just Kimono? 16 March, 2021 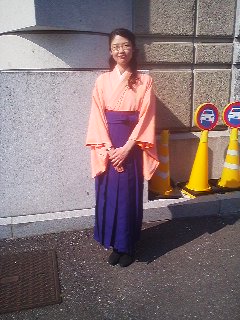 HAKAMA are traditional Japanese pants which can be worn over a kimono. It is now common for women to wear these at their graduation ceremonies. In the Meiji Period HAKAMA were worn as a rule by students at Girls` School. The Wearing-HAKAMA- at-your- Graduation trend of recent decades can be said to be the impact of a popular MANGA and ANIME series called HAIKARA-SAN GA TO-RU

I was in the lobby of Tsukuba`s Okura Hotel. Reading the newspaper as I waited for an appointment, I noticed out of the corner of my eye, several small parties taking and posing for pictures. Lifting my eyes for a better look, I saw what were apparently parents and grandparents, all dressed up , taking pictures, of and with, kimono clad young women- with one such woman for each group.

The first thing that went through my head was that there was going to be a big wedding that day, and some of the guests were  taking family pictures before the event would begin. 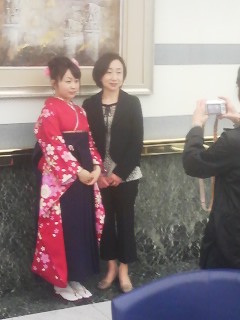 Taking pictures in HAKAMA before the graduation ceremony

Then I realized something. These girls were not wearing KIMONO alone- they had on HAKAMA pants on which came right up to the bust-line.

Putting two and two together, I now understood exactly what was going on- it was the end of March, graduation season in Japan, and these young women were about to attend their own graduation ceremony at Tsukuba University. 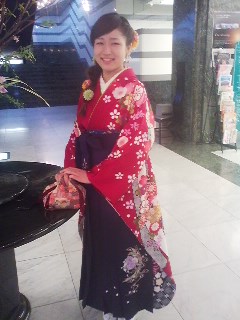 Though the HAKAMA (袴) has been continuously worn Japan for at least 1,500 years- remains of these traditional pants have been found in ancient KOFUN tumuli, in contemporary Japan, women only wear them for very specific occasions or activities.

1) At Shinto Shrines, you will find the Shrine Maidens (MIKO) in bold vermillion HAKAMA over pure white kimonos..

2) You will find girls in navy blue, or less commonly, white HAKAMA, at  DOJO (training halls) as certain types of martial arts use them as a uniform- AIKIDO, KENDO, NAGINATA-JUTSU are among the BUDOH (martial arts) whose practitioners train in HAKAMA. (If you see a few bus-loads of people in blue or white HAKAMA you can assume there is a martial arts event being held)

3) In March girls going to their graduation ceremonies can be seen in hotel lobbies, at train stations, and of course, in front of their universities. 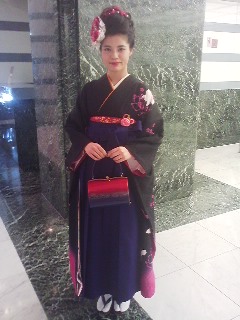 As I watched the proud families in the hotel lobby I started to think about WHY it is now trendy for women to rent a HAKAMA for  their graduations? (No, before the late 1980`s women did not wear them for such occasions.) 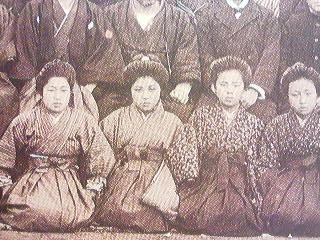 Female students in HAKAMA in the late 19th century

After the Meiji Restoration of 1868 and all the modernization and Westernization that came in its wake, there were great changes in (among many, many other aspects of life) FASHION.

While the upper-classes were quick to adopt the new modes of dress, the first commoners affected by these changes in WEAR were soldiers, policemen, railway workers and nurses who were given Euro-American-style uniforms .

While women in general were slower than men in taking to new styles of dress, female teachers and students needed a new form of wear, for the newly established GIRLS SCHOOLS.  Their  UNIFORMS, however, would not be so radically new or different. Over their KIMONO they would wear HAKAMA pants- easy to work and study in, and which would be especially necessary for physical education classes (HAKAMA keep your KIMONO from opening up!) 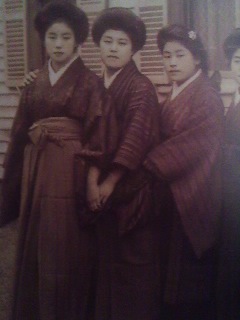 Female students in HAKAMA about 100 years ago 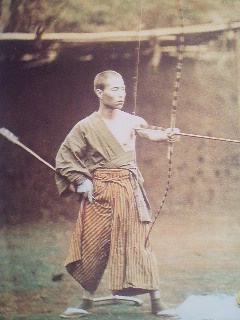 Hakama are worn by practicioners of certain  martial arts

After talking to dozens of women who had graduated at the time HAKAMA wearing at graduation ceremonies began to flourish, I was finally able to pin down a specific source- A comic book series which was later made into a cartoon, tv series, a movie and was even  adapted for the stage. It`s called HAI KARA-SAN GA TORU （はいからさんが通る) and the original comic book first appeared in 1975. The animated TV series ran from 1978 to 1979.

It was this film and the popularity of its main characters style of dress hat led to the initial boom in graduation HAKAMA wearing.

The kimono rental shops (who rent the HAKAMAs) have been doing their best to keep the custom alive through advertising.

The main character of the movie HAIKARA-SAN GA TORU, played by Minamino Yoko, wore HAKAMA and boots. It is probably this character based on  popular MANGA and ANIME series of the same name which led to the revival of HAKAMA wearing by young women- though only at their graduation ceremonies

A HAIKARA-SAN DOLL in HAKAMA

Keep in mind , however, that the world of men`s HAKAMA is very complex-  and the HAORI HAKAMA (HAKAMA with a traditional jacket emblazoned with the family crest) is a standard type of traditional formal-wear. 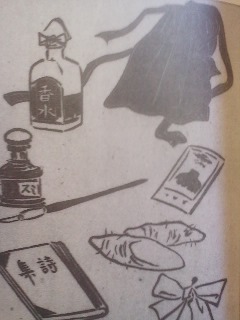 A magazine illustration from the Meiji Period showing the essential items for students at a newly created Girls` School – perfume, ink, a poetry anthology, sweet potatoes, and of course: a hakama 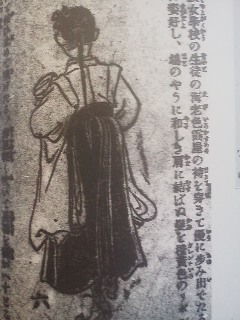 Another Meiji period illustration showing a female student in hakama. 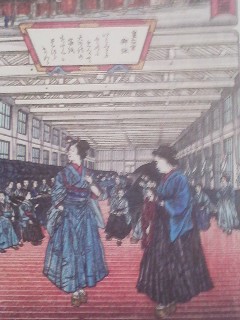 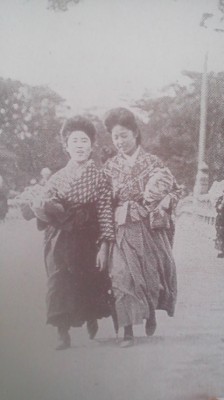 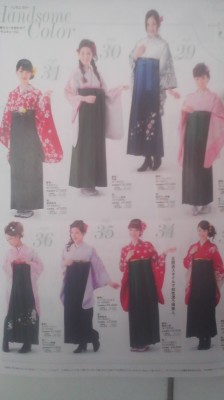