Tara No Me ( タラの芽), the King of Wild Vegetables, Growing Right Under My Nose All these Years! 5 April, 2021 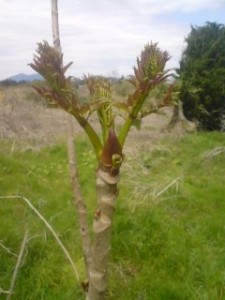 Tara no me growing next to my house in Tsukuba ( note Mt. Tsukuba in the background)

Once surely an essential part of the struggle for survival and later important for supplementing meager diets, the gathering of, preparation, and especially the EATING of SANSAI (山菜), wild vegetables, is still a popular way for the Japanese to enjoy a sense of the season, whichever one it may be! In fact, the demand for seasonal SANSAI has led to many of them being cultivated by farmers, and subsequently their easy availability at supermarkets ( these are still referred to as wild veggies, however!)

Despite the fact that Tsukuba`s wild green spaces have been disappearing at a frightening rate, it is still a great place to hunt for wild vegetable, and you will often spot people in cloth gloves ( gunteh, 軍手) and sun hats, carrying scissors and plastic bags ( in Japan people always wear the appropriate UNIFORM, and it is easy to tell what they are up to by what they are wearing!), on their hands and knees closely scrutinizing the ground off in the middle of a wild field. For many, this has become a seasonal ritual, with each person having their own favorite SANSAI. 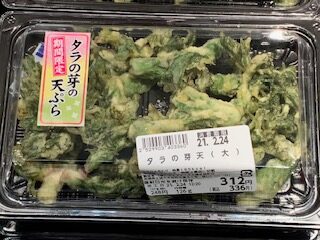 It might be disturbing for “purists” who insist on picking “wild vegetables” themselves in the forest – but TARA NO MEH are now available at most supermarkets! 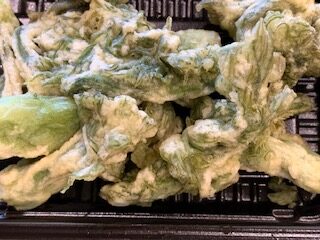 Last week, an old acquaintance of mine, Miura-San, gave me a lift back home after a morning spent in Tsuchiura. Now I have long known that he was a master of AIKIDO, but until we pulled into my drive-way I had been unaware of the fact that he was a connoisseur of SANSAI ! Even before he had come to a complete stop he was already excitedly opening his door exclaiming- TARA NO ME ! He then proceeded to rush into the untended field adjacent to my house, and break what looked like fresh sprouts off of a group of tall, sad looking , thorny wooden stalks.

These,  he exclaimed, were the KING OF SANSAI, delicious when fried as tempura. With a bunch of these now in hand, he got back in his car, and backed out, waving good-bye, with a huge, happy grin on his face. 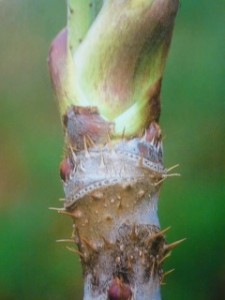 When he was gone, I examined the plant he had found more closely. It was in fact a cluster of stalks, each about two meters high and covered with thorns. I realized that though Miura-San had been all excited about discovering this untapped FIND and going home and cooking them up, he had, out of consideration for the Tara Tree ( in English- the Japanese Angelica Tree, scientific name- Aralia elata), taken only the TOP SPROUTS ( ICHI NO ME,  一の芽), and leaving the ones on the side. Taking more than that would kill the tree.

For this reason, I couldn`t take any for myself this spring, though I do look forward to sampling the fresh sprouts next year. 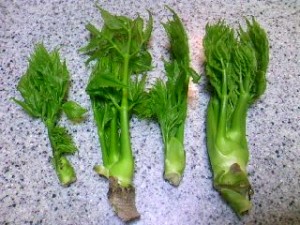 For those of you who would like to sample some TARA NO ME for yourselves in spring,  head over to the supermarket or food section of a department store ( in Japan, of course!) and ask : TARA NO ME NO TEMPURA ARIMASU KA?

Many Japanese style restaurants, including those that specialize in soba noodles, will serve tara no me tempura in this season.

As you can imagine, besides making them into tempura, SANSAI lovers prepare them for eating in a variety of ways.

And as for me not knowing that the KING OF WILD VEGETABLES was growing just beside my house, I have to admit that I`m a bit embarrassed.

You can bet I will studying up on my SANSAI identification this week. 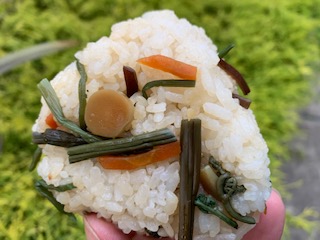 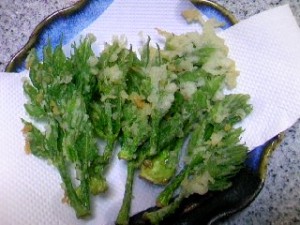 Voila! Tara no me tempura 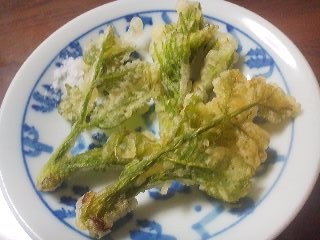 Tara no Me tempura

And for anyone interested, the TenGooz, a band which has long taken advantage of the amazing pool of foreign musical talent that has passed through Tsukuba over the years, has come out with a new album which you can listen/ download for free.

Enjoy the music with your TARA NO ME ! 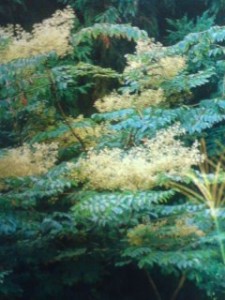 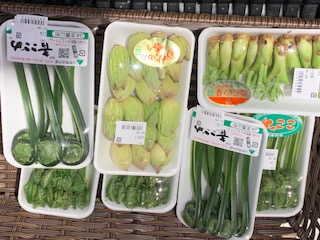 A variety of different SANSAI on sale at a Tsukuba supermarket – tara no me, kogome, kogomi, and fuki no to.

*The Japanese proverb TODAI MOTO KURASHI which can be used as the equivalent of the English: It was right under my nose all the time, translated word for word means ITS DARK AT THE BASE OF THE LANTERN.

Many Japanese people today assume that the word TODAI in this saying means lighthouse, such as in those that are located on the coast to show ships that they are near the shore.

The TODAI referred to  here is something quite different, however. It is a kind of lantern on which a fire is lit on a bowl like container set atop a base which is similar to a tripod. Thus, while the lantern creates illumination, directly below the fire, it is dark.