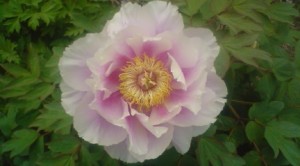 My friends and I  had long been planning  to visit the Tsukuba Botan-En (つくば牡丹園), the nationally renowned peony garden located in Tsukuba`s Kukizaki District. Not only were we looking forward to seeing the flowers which bloom there, but we had some free tickets, to boot!   However, because of our schedules and the weather, we just never got around to actually going there- until today, that is. 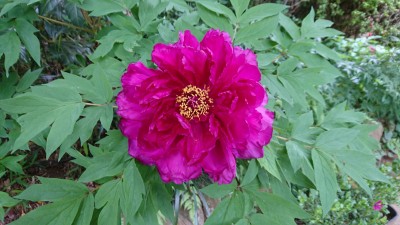 In bloom at the peony garden in Kukizaki, Tsukuba (late April 2021)

And how fortunate it was that  our little outing had been put off ! Because when we finally did get there, on April 24, conditions were perfect- both the weather and the state of the flowers themselves- in SPECTACULAR BLOOM! 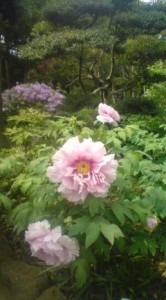 Even as we got out of the car at the garden`s crowded, turf-lawn parking lot, we stretched our arms out, taking in the warm fragrant air, then exhaled with satisfied aaahs. Conditions could not have been better. When we checked the IN BLOSSOM BOARD posted at the front gate we were not disappointed- it said that thousands of peonies (botan) were in bloom, along with some  shakuyaku (芍薬), a smaller  relative of the peony, and plenty of azalea ( tsutsuji). 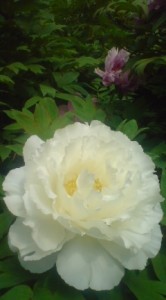 Drawn in by the color and fragrance which could be glimpsed (and whiffed) from outside the gate, we showed our free passes ( usually the entrance fee is a hefty 800 Yen per person !) and picked up our maps of the grounds. I noticed that many visitors took time to stamp their stamp books with commemorative seals (just as pilgrims in earlier ages in Japan would have their books stamped, providing both a unique memento and official proof that a temple had been visited. A precursor of the kinen shashin or commemorative snapshot). 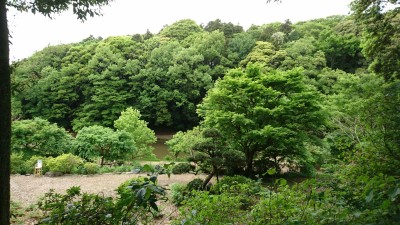 Fresh greenery at the peony garden – this was the site of the former Ushiku Castle.

Already, just by the  front gate, our eyes (and noses) were treated to a fine selection of impressive botan, the KING OF ORIENTAL FLOWERS. These large, yet delicately petaled blossoms which grow on a bush, were originally introduced to Japan from China in the Nara Period (710-794) as a medicinal plant. On the continent the peony had not only been important for its pain-killing and anti-convulsive powers, but also as a subject of painting and poetry and as a popular decorative motif. In fact, it was actually adopted as the national flower of Ching China. 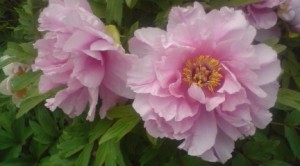 More magnificent peonies at the same time and place

The crowds who were lucky enough to have been at the Peony Garden today, were probably not thinking much about the history of these plants, but they sure were enjoying every moment- and snapping away with their digital and cell-phone cameras. The incessant clicking  made by all this photography nearly drowned out the sound of spring birdsong. 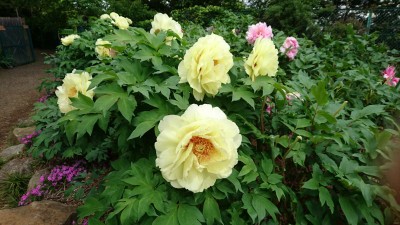 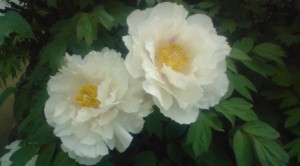 By next week, the BOTAN will have started to whither and thousands of shakuyaku will burst into bloom in great number and variety. These flowers were also imported from China as medicine (as was tea) and have been given the nickname Prime Minister of flowers. They are also famed for their beauty, which they have come to symbolize. Instead of growing on a bush their stem is a type of grass which also withers after the blossom has fallen. 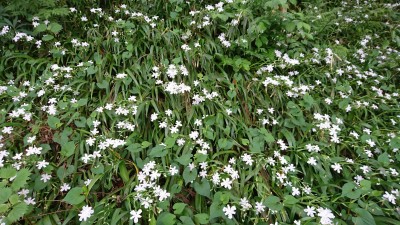 If you mention botan or shakuyaku to a Japanese, they will probably recite a popular idiom used to describe  beautiful women: Tateba shakuyaku, suwareba botan, aruku sugata wa yuri no hana (standing she is a shakuyaku, sitting a botan, and when she walks-  a lily). 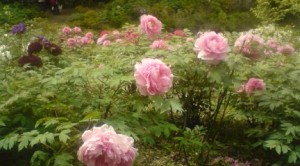 A wider view of the garden

Speaking of beauty…
By the end of this month, the garden should be best for what the Japanese call the KING OF WESTERN FLOWERS: the rose. There are some amazing specimens there, many or most of which you probably have never seen before. It will be well worth investigating if the weather is right.

And if all of this tires you out there is a soba shop on the grounds. 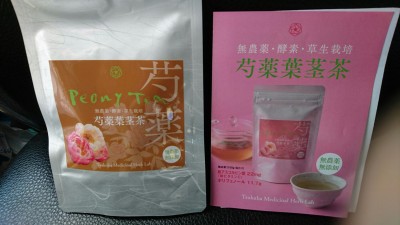 The souvenir shop sells this peony tea which they say has a powerful anti-aging effect…tried it and tasted like mushrooms. 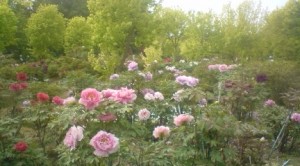 And after the wonderful hour or so that we spent today, we felt that we should express our appreciation to the man responsible for creating this very special garden- a man who can be truly said to have a GREEN THUMB- Mr. Hiroichi Seki. Seki-San was apparently a salary-man, who fell in love with, and subsequently spent many years cultivating PEONIES. Though at first he had little success with the difficult flowers, trial and error and an abundance of positive attitude led to the development of  a unique  fertilizer- a blend which is apparently the key to this gardens splendor. Bags of this mixture are on sale at the garden. 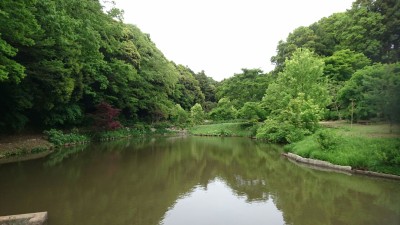 Fresh greenery at the Tokyo Peony Garden in Tsukuba