Cercis Chinesis- HANAZUO (花蘇芳)- a unique ornamental flowering tree which is ubiquitous in Japan, but whose name is not very well known 3 April, 2021 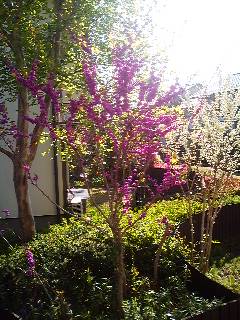 Could it be that they were all planted within the past year? No ! Impossible. I guess its  just that I had never noticed them before! But could that be, considering that they bloom so conspicuously- in a bold purple (and sometimes white), and so uniquely- with the blossoms seemingly stuck in clumps DIRECTLY ON ITS BRANCHES (before the leaves come out)- in the gardens of just about every home in Tsukuba!? Could I have overlooked them for all these years? That must be the case-  I am embarrassed to admit !  I never even noticed these same trees planted at short intervals along a many kilometer stretch of Rt 408 (one of Tsukuba`s major thoroughfares)- on both sides of the road! 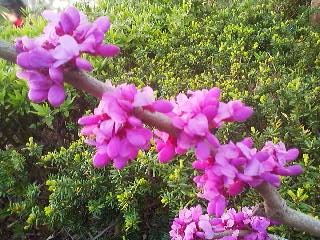 I was then further surprised to find that when I asked people knowledgeable about flowers to teach me the name of this tree, nobody knew- even though some of them had the very same species blooming in their gardens (astonishing indeed in a country like Japan where people really know their tree and flower names!).

Finally one person who had earlier not been able to provide me with the name called me- she had suddenly remembered: it was HANAZUO (花蘇芳)- and as I found out later still- Cercis chinesis (scientific name). 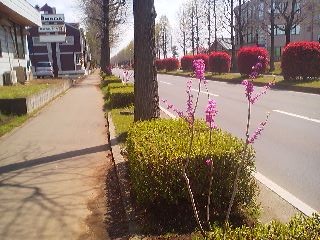 Hanazuo saplings have been recently planted at regular intervals along Tsukuba`s Rt. 408

Apparently this tree of the legume family (in autumn you can find bunches of long, flat and slender pea pods hanging from its branches) is originally from China (and the Korean Peninsula), but was introduced to Japan sometime in the early 17th century ( the earliest extant reference to this tree in Japanese was in the guide to flowers 花壇地錦抄, published in 1695).

It became popular as an ornamental tree (it now grows on all of Japan`s major islands) but its bark was also apparently used for medicinal purposes (as I have discovered at the library)- as a detoxicate, a pain-killer, and to treat boils and menstrual disorders. 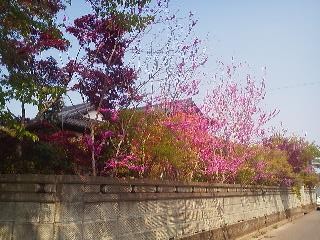 While you will find some larger HANAZUO trees on the grounds of the large houses in Tsukuba`s older neighborhoods, you will find that in the newer neighborhoods, as well as along Rt. 408 and in the Botanical garden, these trees look more  like short single branches stuck in the ground- though strangely beautiful all covered- like purple moss- with their unique blossoms. 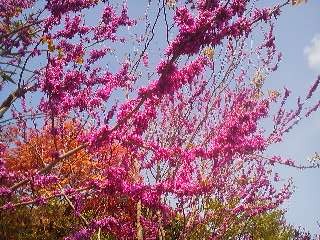 I hope it doesn`t take as long for you to notice these trees as it did me! 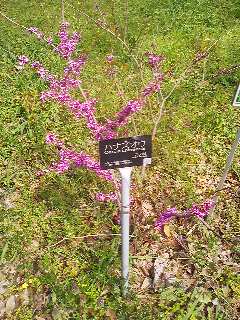 For better close-up pictures of the HANAZUO blossoms than my cell phone camera can take check out this bloggers shots: 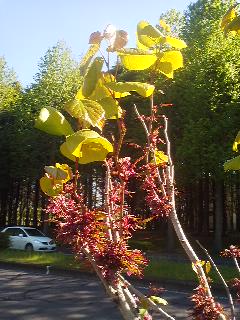 The same trees on May 3rd last year