Two Rare Ho-anden (奉安殿) Survive Within an Hour`s Drive of Tsukuba (but in opposite directions!) 1 March, 2021 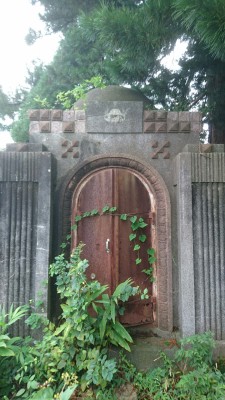 Before they were all ordered demolished by the American Occupation Authorities in 1945, there were Ho-an-den shrines on the grounds of just about every school in Japan . They had been built in the 1920`s and 1930`s to house photo portraits of the Imperial Couple (GOSHIN-EI), plus a copy of the Imperial Rescript on Education (KYOIKU GYOKUCHO). Only two survive in Ibaraki Prefecture – both very interesting pieces of architecture (which might be why they were preserved).

The men who brought about the demise of the Tokugawa Shogunate in 1867, mainly warriors from the “outside (TOZAMA) domains”* of Satsuma (now Kagoshima), Choshu (now Yamaguchi) and Tosa ( now Kochi), fought united under the banner of SONNO JOI (Revere the Emperor, Expel the Barbarians!) – an ideology that had been promoted  by the Mito Domain (now Ibaraki Prefecture) since the 1850`s.

After the emperor had been “restored” to what was deemed his rightful place of power and a new government formed (with its leaders made up mainly of the very same men from Satsuma, Choshu and Tosa **), the fear of colonization by the Western Powers remained at the forefront of everyone`s minds – with a new slogan: FUKOKU KYOHEI (富国強兵) – Enrich the Nation, Strengthen the Army –  used to whip up popular support for a program of frenzied modernization.

One of the most important steps taken by the Meiji government, working towards this goal, was the establishment of a modern school system – one that was meant to instill the people with a spirit of loyalty to country (i.e. the Emperor) and obedience to authority. In order to promote these ideals, the Imperial Rescript on Education  ( KYOIKU CHOKUGO) was issued on October 30, 1890***. Copies of the rescript, along with photos of the Emperor Meiji (Mutsuhito) and his wife (which were called the GO SHIN EI , 御真影), were distributed to every school in Japan (and its colonies). 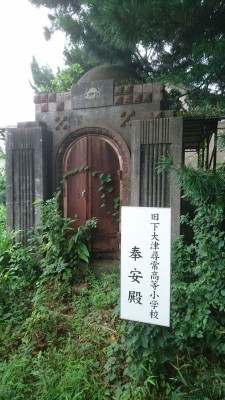 Dome-topped Ho an den  in Shimo Otsu, Kasumigaura City (click here to see what it looked like before the war ended). Though it has been left intact, it is now clearly untended.

This document (and the photos, as well) were treated with extreme reverence. Special care had to be taken that it was not damaged in floods or fires (in cases of emergency the Rescript had to be evacuated along with the students) and that the photos did not fade or yellow. Children were made to memorize the complete 315 character text (you can still find, in the year 2018, some very old people who can recite it in its entirety.)

During the first couple of decades after ii had been issued, copies of the rescript (and the photos) were kept in small shrines inside the school buildings and taken out on special occasions (the Emperor`s Birthday, National Foundation Day – and during the Taisho and Showa Periods: Emperor Meiji`s Birthday) and read out loud by the principal in a tense, high-pitched voice that showed the proper sense of awe (any mishandling or faux-pas on his part could lead to resignation, or in extremely rare cases – suicide). 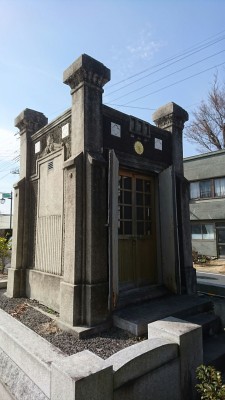 A ho-an-den in Makabe, Sakuragawa City – near the old train station- with Greek columns!.

As Japan grew more nationalistic and militaristic in the 1920`s and 30`s, special outdoor shrines were built, near the main-gates to the schools, to house the Rescript and the Imperial Photos. These were called HO-AN-DEN, and they were usually made of concrete, brick, or clay – something that would keep them safe from typhoons and other natural disasters**** . When children came to and left school, they would bow respectfully towards them (students failing to do so were, of course, punished). 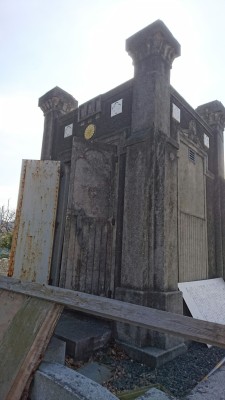 Ho-an-den in Makabe. Originally built on the grounds of Makabe Cho-ritsu Elementary School, after the war it was moved to the present site by sled – a process which apparently took two weeks. According to a sign board left leaning against it, the local people just didn`t have the heart to destroy it. A preservation society was established and members go to the Ise Grand Shrine (dedicated to the divine ancestors of the imperial family) to bring back an amulet to be placed inside.

On the (above-mentioned) special-days on which the Rescript had to be read, the principal, with great reverence, in formal wear with white gloves on his hands, would take it out of the Ho-an-den and carry it into the auditorium. Special guests, local politicians, members of the board of education, and the neighborhood patrolmen would also be there in attendance. After having read out the Rescript, the principal would then give a small talk on its importance. When it was all over, everyone there received a special gift from the Imperial Household – sweets emblazoned with the imperial seal. In this way, all the children of Japan were made to feel a special closeness with the emperor. 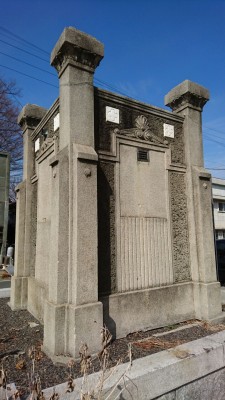 Ho-an-den in Makabe – from a different angle

After the war, the American occupation authorities, in an effort to purge Japan of any vestiges of Emperor Worship, gave a directive to have all the Ho-an-den destroyed – and that`s what I thought had happened to them all. But then, a few months ago, on a drive through Kasumigaura City, I noticed an unusual, domed building made of concrete, half hidden by weeds and ivy. When I got out for a closer look, I found a sign that read: Ho-an-den of the former Shimo Otsu Elementary School. So they weren`t all destroyed!

I immediately checked online and found that there were actually a few dozen surviving Ho-an-den in Japan – though only one other example in Ibaraki Prefecture. Luckily, it was in Makabe, not very far from Tsukuba, and I had planned on going there for the annual Hina Doll Festival anyway. When I got to the town, I asked some locals where the Ho-an-den was, but they had no idea what I was talking about. The staff at the local history museum knew exactly what I was talking about and gave me directions. A two minute walk brought me to there. It turned out to be the most impressive part of my visit. You can probably understand why after seeing the pictures I`ve posted here. 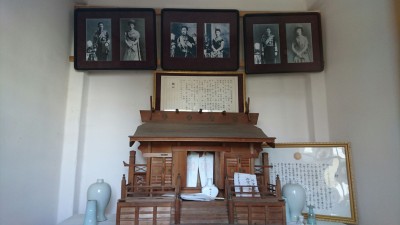 Coincidentally, a few day after my visit to Makabe, I was on my bicycle headed towards the city office (to pay my taxes!) and was passing by an old elementary school – Katsuragi Shogako. I suddenly noticed something that had me squeezing vigorously on my brakes. To the left of the main gate to the school grounds, there were some old stone pillars – like those you`d find at a Shinto shrine. But there was no shrine – just an empty space…. and I realized that that was where the Ho-an-den had once been! 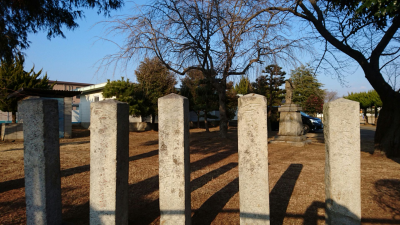 The spot where the ho-an-den once stood at the Katsuragi Elementary School. 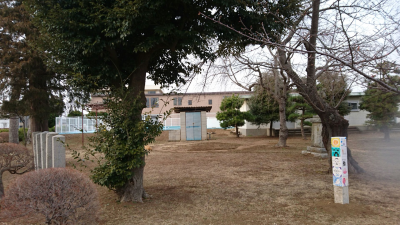 A shed of some sort stands where the ho-an-den once was – note the sumo ring in front of it.

See pictures of about 30 other surviving Ho an den as well as old picture of the some of those that have been lost.

* There is more than a bit of  irony and self-fulling prophecy involved in the fact that these domains, the ones the Tokugawa always feared would rise against them (and took extreme measures to ensure that they did not) finally did bring about the Shogunate`s ruin. What is ironic is that these vocal proponents of Expel the Barbarian ideology had long benefited from foreign trade and contacts with foreigners before the Tokugawa cracked down on them.

** Though the Mito Clan had been so important in promoting pro-Imperial ideology, no Mito men became part of the Meiji oligarchy that dominated the Army, Navy and politics. What happened was that Mito had torn itself apart in the years leading up to the Boshin and Seinan Wars (led by Satuma and Choshu men) which defeated the Shogunate and the peaceful withdrawal from Edo Castle. Many of Mito`s most capable men had died in civil wars and in the ill fated Tengu-To uprising (which also left its scars on Tsukuba). The area in which Ibaraki men played the greatest role until the end of WWII was in the police.

*** If you are thinking that 22 years was a long time to wait before issuing such an important  rescript you are right. There had actually been The Education Order of 1872 (issued only 4 year after the restoration) which was a much more liberal document, promoting the intellectual  growth of each individual student (in an American and Western European vein). The Imperial Rescript on Education was a reaction to criticism of the older initiative in face of a vibrant Freedom and People`s Rights Movement (which also left scars on Mt. Kaba, near Makabe, where one of the ho-an-den pictured above is located!

**** There were incidents in which school principal committed suicide after copies of the Rescript were destroyed or damaged during the Great Kanto Earthquake of 1923. Later, towards the end of the Second World War it was the principals` responsibility to to make sure the Rescript and the photos were evacuated safely along with the students during air-raids