The Great Tokyo Air-Raid of March 10th 1945 Remembered- and a visit to the Peace Monument in Tsukuba Mirai City at a spot where one of the attacking B-29 bombers crashed ( つくばみらい市のB29が墜落した場所の記念碑 10 March, 2021 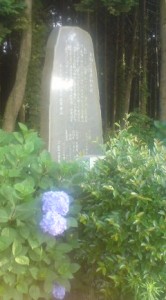 The B-29 Crash Landing Peace Monument in Tsukuba-Mirai City

Thursday March 11, 2021 will mark the 10 – year anniversary of the Great East-Japan Earthquake and the deadly tsunami which came in its wake.  With that tragedy STILL fresh in our minds, and with the continuing concern for the victims and the course of reconstruction in the devastated areas, it is easy to understand how other disasters  could be forgotten. In fact, in Japan, there has been so much tragedy over the past one hundred years alone ( not to mention ages past), that most of the commemoration days for these events, whether natural or man-made, now go-by mostly unnoticed by the general public.

When March 10th rolls around, however, I cannot help but give pause to contemplate a tragedy of epic and historic proportions which took  place on that date in 1945- the Great Tokyo Air-Raid (Tokyo Dai Ku-Shu-, 東京大空襲)- in which approximately 300 American B-29 Superfortress bombers dropped around 1,700 tons of incendiary bombs on Japan`s capital- which was made mostly of wood.

Taking off on the night of march 9th from bases on the recently captured Mariana Islands ( which were called “unsinkable aircraft carriers”), the long range bombers were sent on a mission which represented a grim new turn in the US war strategy ( as conceived by General Curtis LeMay). This meant there would be no more bothering about pinpoint bombing of military and industrial targets- but instead a campaign to cause as much death, damage and havoc as possible in civilian areas, mainly in the major cities ( which in the end were nearly all destroyed). This was done, it is said, to break the enemy`s will to fight. A policy which, no matter how you argue it, would not be acceptable to most Americans ( or any other people for that matter)  today.

The result of that particular night`s work was one hundred thousand dead, millions homeless, and a quarter of the city destroyed. The deadliest air attack in history.

(I have translated the recollections of someone who survived the Great Fire-bombing of Tokyo that took place more than a month later – on May 25, 1945.)

Though each year, a commemorative event is held on March 10 in Ryogoku ( near the National Sumo Stadium) at the Memorial Hall For Two Great Tragedies ( Tokyo-To- Irei-Do, 東京都慰霊堂)- the Great Air-Raid and the Great Kanto Earthquake of 1923, there is little other public mention of this catastrophic event (until 2015 – which was the 70th anniversary of the event).

One reason for this, is that all the war`s air-raids, including that of March tenth, were overshadowed by the much more historically significant ( in terms of the new destructive possibilities they represented)  atomic bombings of Hiroshima and Nagasaki. Basically, it has been the anniversaries of these events, on Aug. 6th and 9th, respectively, which have come to represent and encapsulate all the Japanese civilian suffering of the Second World War. (there is, by the way, no particular day set aside in Japan for remembering those who suffered under Japanese occupation) 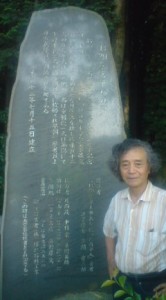 Artist, musician, inventor, Isao Kurihara brought me to the Peace Monument near the spot where the B-29 Tall in the Saddle fell on March 10, 1945

Though the Tsukuba area was not bombed on that night, there still IS a connection between the countryside of southern Ibaraki Prefecture and the Great Air-Raid. In fact, in recent years flowers have been lain every March 10th not far from the Tsukuba Mirai Station along the TX Line.

What is the link? Well, the story of the Tall in the Saddle- one of the B-29`s which struck Tokyo in 1945. And the monument that I have just mentioned is ( astoundingly) not dedicated to the victims of the bombing- but to the crew of the fallen aircraft!

Of the hundreds of planes that set out that night on their deadly mission, 14 did not make it back. Among them was the Tall in the Saddle- whose name derived from the fact that each of its 12 crew members was over six feet tall.

After they had successfully dropped their ordinance ( and helped set the city ablaze), the plane headed back to base, passing over the Yatabe Area ( now part of Tsukuba City). The plane was hit either by anti-aircraft fire or by fighter planes and burst into flames. Witnesses saw the bomber plummet to earth where it crash landed in an idyllic area of pine forest and rice fields in what is now Tsukuba Mirai City ( in Miyama Mura). 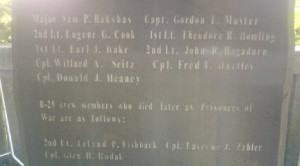 Locals, including many children ( some of whom are still alive today- working in the same fields), rushed to the scene. Apparently, nine of the crew had died instantly in the crash, while 3 others survived ( though one was severely injured).

As had been the case in every other US plane downing, the locals were out for blood- armed with an assortment of implements ( in another incident near the present High Energy Physics Laboratory in Tsukuba, the crew of a downed Grumman met  a violent end at the hands of the locals).

In the case of the Tall in the Saddle, however, the local fire brigade PROTECTED the crew, keeping the mob at bay, until the military police (KEMPEI-TAI) arrived to take them away.

The bodies of the dead were buried in the woods, and the wreckage of the plane was carried to a local school where its registration number was  duly recorded. 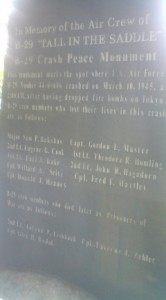 Despite having been saved from the angry locals by the firemen, the Tall in the Saddle`s 3 surviving crew members were never able to make it back home to  their families.

One, the most severely injured, was beheaded on the orders of a Japanese officer (who was later convicted and executed for war crimes). The other two died in prison fires caused by later American air-raids. 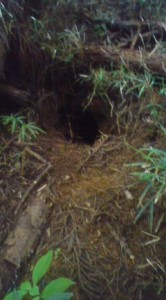 A fox`s den in the woods where on march 10th, 1945 the Tall in the Saddle crashed

Year`s later, when one of the boys ( 8 years old at the time) who had witnessed the crash and its aftermath had grown up and had, after studying in the US, become a college professor, he  decided to look into whatever had happened to the 3  men he had seen being carried off ( all bound up) by the KEMPEI-TAI on that unforgettable night. When he was able to learn and verify their fates, he succeeded in contacting their families in the US.

In 2001, the Professor- Hidesaburo Kusama, arranged for a ceremony in which a memorial stone ( inscribed in English and Japanese) would be unveiled- paid for by the Professor, who had apparently also bought the land on which it lies. Descendants and relatives of the fallen B-29`s crew attended the ceremony.

Still, each year, flowers and other offerings are lain at the stone- which is known as the B-29 Crash Landing Peace Monument.

The use of the term PEACE MONUMENT might seem strange to some of you when applied to a stone commemorating the deaths of enemy pilots who had come to indiscriminately kill and maim Japanese citizens- and there are also the 3 who died as prisoners. Why would there be such a monument in Japan, and why would offerings be made to it by locals.

Well, when you take into consideration traditional Japanese beliefs- it makes perfect sense. In Japan, it has always been important to pacify the spirits of those who died full of rage or resentment. The great rebel warrior- Taira No Masakado- who in the 10th century declared himself the New Emperor shortly before being killed, was enshrined as a God so as to keep his spirit under control. The brilliant scholar and courtier Sugawara no Michizane, exiled unjustly to Kyushu shortly before his death was enshrined in the same way.

On a less grand scale ( and much more locally) there is the monument to appease the spirits of the farmers executed for taking part in a revolt in what is now Ami Town ( next to Tsukuba) This  is actually disguised as a road marker and was erected by the very merchants whose shops and houses were destroyed in the uprising ( the Ushiku Sukego Ikki).

For me, the PEACE monument in Tsukuba Mirai City figures in the same vein, as an attempt to quell bad feelings, and keep vengeful spirits at bay.

It also represents, I believe, the true desire for peace- and it IS amazing how two peoples which battled ALL-OUT just a few decades ago ( the Americans and the Japanese) can now have the relationship they have today.

It is probably this strange experience that America had with Japan- the fact that after merciless bombings, the Japanese still enthusiastically took to American ways, that similar military strategies were later applied again and again by the US government- in Indochina, Iraq, Afghanistan, etc…. with the belief that after victory had been achieved the vanquished party would, like the Japanese, rush to embrace America and its system.

The only problem is that those other places are not Japan, and when they were treated (and defeated) in such a way, that did not react like the Japanese and go on to wholeheartedly adopt American culture. It seems to me quite clear that many who grew up as part of former President G. W. Bush`s generation, with fathers who had fought in what came to be known as “The Good War”, believed that even with widespread civilian casualties, the peoples defeated by American power would embrace the US and American style democracy with the same enthusiasm as the Japanese did. But as I have just said, other countries are NOT like Japan. I mean, think about this- General Curtis Lemay, the man who devised the strategy which resulted in the bombing out of just about every Japanese city AND the atomic bombings of Hiroshima and Nagasaki, was DECORATED and honored after the war by the Japanese government and the Emperor! Simply astounding when you think about it!

If anyone does know of any similar monuments- those dedicated to the memories of fallen US pilots which were erected by the countries on the receiving end of a bombing campaign- please let me know about it. 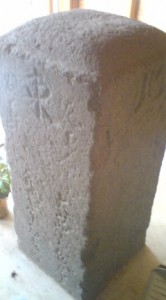 A stone monument which appears to be an old road sign (dohyo-) at first glace. It is in fact a KUYO-TO-(供養塔) which offers prayers for the souls of those executed for participating in a local peasant uprising. Interestingly, the monument was paid for by the very merchants whose homes and shops were burned down in the riots ( Ami Town, Ibaraki)

For those interested in the Second World War, download my translation of Dr. Junichi Saga`s book of war stories ( as told to him by his elderly patients and neighbors