Ancient Rituals For Silkworms at Kokage-San Jinja (蚕影山神社) – hanging on to life by a fine silk thread – on March 28th and October 23rd 27 March, 2021 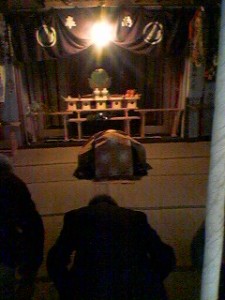 Ceremonies are held at Kokage-San Jinja  Shrine in Kangori Tsukuba twice a year- on March 28th and October 23rd – starting time around 3 pm.

Long before Japan was exporting Toyotas and Sony’s and manga’s, it`s most important foreign exchange earner was silk ( it was the biggest producer in the world from 1906 to 1968!). Until about fifty years ago, most farmers in the Kanto area supplemented their incomes by raising silk worms. Ten years ago I was still able to find a few of the huts where these plump caterpillars were grown, and the sound of their loud, incessant munching on mulberry leaves still rings in my ears whenever I think about the times I entered them. Now, even the mulberry groves which were a typical part of the Tsukuba landscape have all but disappeared.* 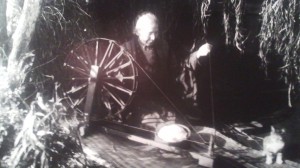 Old photo of a woman spinning thread in the Tsukuba area. For a detailed and loving description of what it was like raising silkworms in the this part of Japan in the early 20th century read my translation of Junichi Saga`s: Remembrance of Village Days Past

Last year, on March 28th, I braved thunder and lightning to negotiate the steps leading up to the Kokage-San Shrine and join the priests and 3 older, local gentlemen to give offerings for abundant rice crops and successful silk production – and to think back nostalgically upon the heyday of Japan’s relationship with silk-worms and their precious cocoons. 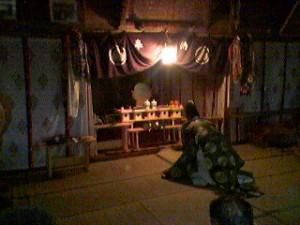 Kokage-San Shrine is yet another Tsukuba superlative. It is the oldest shrine in Japan dedicated exclusively to sericulture and once attracted thousands of worshipers, many from the textile towns of Nagano, Gunma and Yamanashi.  Located in the beautifully rustic Kangori (神郡) district of Tsukuba, the shrine is reached by ascending ancient and uneven stone steps through an even more ancient sacred grove.

THE LEGEND OF THE KONJIKI PRINCESS

The sea used to actually reach not very far from this site, and according to local legend (there are several versions !), in  6th century India there a princess who was constantly being abused by her step-mother. The situation got worse and worse and finally, the king decided that it would be best for his daughter to make her way to another land for a new start. He had her put in a boat made of mulberry wood and had her cast off. She made landfall near Mt Tsukuba. A local man called KONDAYU and his wife tried to help the princess- but to no avail. Starved and exhausted, she shriveled up into a little worm, The couple put it in a big box and fed it mulberry leaves. It grew bigger and stronger. It made a cocoon. The deity of Mt. Tsukuba, in the form of a hermit named EIDO SENNIN (影道仙人), taught the local people how to extract silk thread from the cocoon.

This was the beginning of what would become the thriving sericulture of this area.

To the right of the shrines main hall, under an enclosure I found an undated E-ma painting, donated by someone from Nagano Prefecture, depicting this scene.

I had a chance to chat with the Kanshushis (Shinto priests) as they were setting up the offerings on the altar. They were actually sent by The Tsukuba-San Shrine, as the Kokage Shrine has nearly been forgotten with the peicipitous decline in sericulture in Japan over the past few decades. Now there are priests at the shrine only twice a year, March 28th for the spring offerings, and then November 23rd for the shrine’s festival. 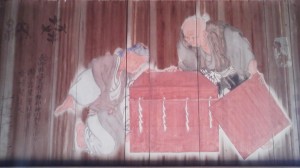 An old E-MA ( votive picture) depicting the story of the Indian Princess KONJIKI HIME- who turned into a silkworm after she died. As a consequence, the local people learned how to produce silk!

They explained to me how special the silkworms (kaiko) were to the Japanese, as they were the only domestic animal actually raised in people’s homes. They are also the only animals which normally are referred to using an honorific  – O Kaiko-Sama, though the local people usually shorten this to O Ko-Sama. As the time came to commence the ceremony only three old men had battled the stairs and settled inside the shrine for the ceremony. This being a mere shadow of the crowds which would have been there in former days. First, a purification rite was carried out, and then offerings of cocoons, fruit, and sacred sakaki leaves were made. O-miki (sake) was then drunk, and commemorative towels given to the few of us present. 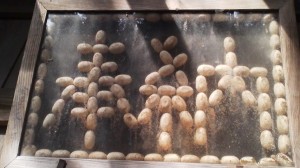 Cocoons arranged to make the characters for HO-NO- (offerings) 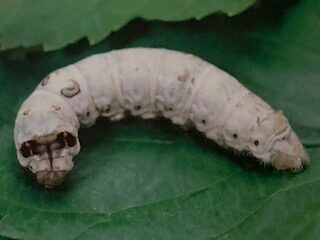 A silkworm (KAIKO) which in Japanese is the only creature referred to with the honorific SAMA ( as in: OKAIKO SAMA). Though they eat only mulberry leaves, you’ll never find them outside on a mulberry tree. Cultivated for thousand of years, they have lost the ability to climb trees – and must be fed by humans! They molt four times before making their cocoons -made of a silk strand 1500 meters long.

After the ceremony, we clambered down the steps as the local men reminisced about the shrines glory days. Now the wooden buildings which would have been used by numerous vendors on this day were virtually falling apart ( one has actually collapsed!). One man mentioned that a movie had been shot on this staircase, though he could not recall the title ( it was the unwatchable first directorial effort by actor Yakusho Koji- Gama no Abura). Another man mentioned how just the other day the Emperor and Empress performed a similar ritual for silkworms, which he had seen broadcast on TV (the Imperial Couple raises rice and silkworms for ritual purposes). 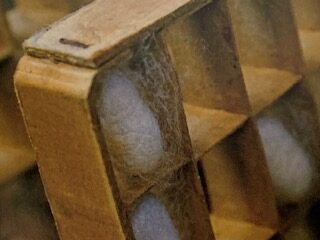 At Japanese farm-houses everyone would help out making these MABUSHI frames for the silk worms to spin their cocoons in. Interestingly, while the Chinese had been exporting silk to Europe since at least the 4th century BC – along what became known as the Silk Road – they were able to keep the fact that the material came from BUGS for centuries. The Europeans believed it was some sort of plant material

We reached the bottom of the stairway huffing and puffing. We then entered the dilapidated old shop which once served the throngs of pilgrims who would flock here. They still sold a special souvenir — Kokage Yo-kan (bean-paste). As a breeze entered the shop it gently lifted the paper displaying the price of the yokan. I noticed that for that day they had raised the price by 100 yen, taking advantage of the ceremony. Unfortunately, only 3 locals and I had shown up. Times change, things change, and this ancient rite is certainly hanging on by a VERY thin thread. 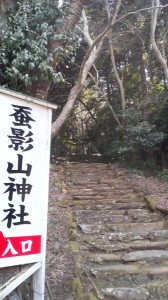 Other Silkworm Shrines in Ibaraki Prefecture

There are two other shrines I know about in this prefecture that are related specifically to sericulture. One is in KAMISU (神栖) and is called the SANREI JINJA (蚕霊神社) – the Spirit of the Silkworms` Shrine. The other is in Hitachi and is called the KOKAI JINJA (蚕養神社). They are also associated with legends similar to the story of the Konjiki Hime. 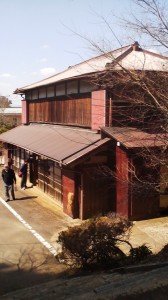 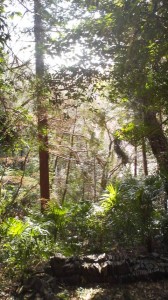 The walk up takes you through beautiful woods 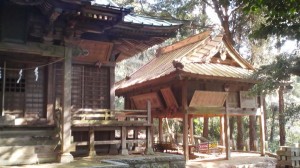 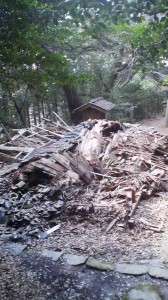 On a walk up to the shrine  I found that one of the shrine`s old neglected structures had collapsed! 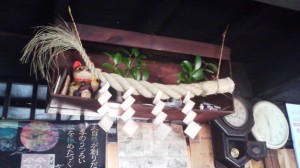 The Shinto Altar ( kamidana) at the old shop (and former inn) at the foot of the Kokage-San Shrine in Kangori, Tsukuba

* It was the invention of nylon which spelled the eventual end of Japan`s silk industry. In fact, Americans joked that the word NYLON was an acronym standing for Now You Lose, Old Japan.

The original meanings of the names of two of this region`s most important rivers- the KOKAIGAWA and the KINUGAWA also reflect the great importance of sericulture in this area in past ages. Though now KOKAIGAWA is written with the characters: 小貝川, meaning Little Shell River, it is believed that the original meaning was Silkworm Raising River – 蚕飼い川- with the same pronunciation.

The KINUGAWA is now written 鬼怒川, which means the Angry Ogre River- but  was probably originally the KINU (絹) GAWA: Silk River.

Read more about the tradition of weaving fabric from linen and silk in this part of Japan from one of my previous posts. 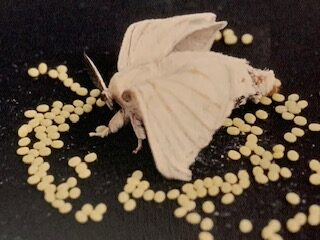 The domestic silk moth (Bombix mori) and its eggs – which Japanese farmers would buy at specialty shops in town so they could begin the silkworm-raising process. In 1864 – four years before the Meiji Restoration, the Shogunate, sent 16,500 sheets of silkworm eggs to France (where their silk industry had been devastated by the spread of a silkworm disease). As a token of thanks, Napoleon the 3rd sent “The Last Shogun” Tokugawa Yoshinobu 26 live Arabian thoroughbreds (in 1867) – one of which ( the horse called PAREE GO) is mentioned in Natsume Soseki’s novel Sanshiro.