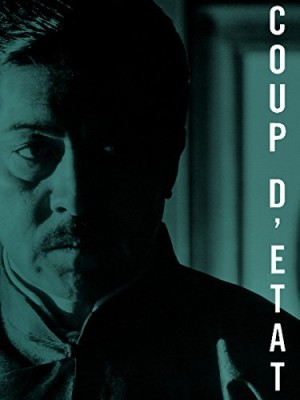 Whenever I look up at my wall-calendar and notice that it happens to say 2/26,  I am reminded of  the February 26th Incident of 1936, an attempted coup d`etat that took place in Japan, referred to here as the NI-NI-ROKU JIKEN (the Two-two-six Incident). A few years ago, I even went to Tokyo on that day and tried to conjure up  in my mind`s eyes the events that took place in 1936 as I wandered near the places where they actually occurred  (though back then, before global warming, Tokyo was blanketed in snow on that February day while now it almost never snows at all on the Kanto Plain). My imagination got some help from the fact that I have read extensively on the subject – and have seen two films about the incident –  the 1989 Hideo Gosha film 226 ( NI-NI-ROKU, Four Days of Blood and Snow, in English) and the more impressive 1973 work by Kiju Yoshida, KAIGENREI （戒厳令) – Martial Law (though an alternate title is Coup D`Etat), which is a psychological study of the man who inspired the coup, ultra-nationalist philosopher and right-wing agitator, Kita Ikki. Watch the trailer for Coup d’Etat (Kaigenrei)  by Yoshida Kiju for on utube – with English sub-titles. 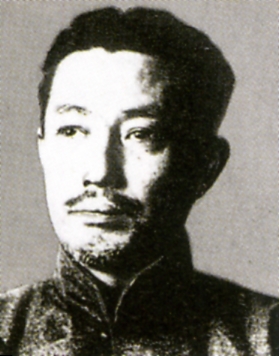 What made me want to write about the the February 26th Incident today, on February 26, 2017, is how much Japan of the 1930`s reminds me of the United States of the late 2010s – and how the radical mentor of the rebellious officers, right-wing thinker Kita Ikki, makes me think of Steve Bannon, former White house chief strategist for Donald Trump and former driving force behind the “Alt-Right” Breitbart News Service. The similarity between the two men is most obvious when looking at whom they both identify as “the enemy” – the establishment, liberals, and a “corrupt elite”, who are seen by both men as leading their respective countries, races and civilizations, down the road to collapse. 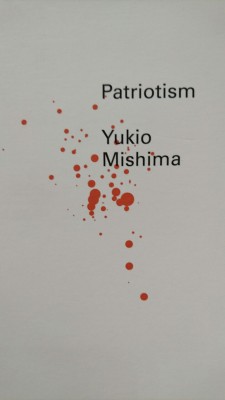 Recommended reading for February 26th – Yukio Mishima`s short story Patriotism (YU-KOKO -憂国) is a riveting description (beautification – fetish-ification) of the ritual suicides (seppuku) committed by a member of the Imperial Guard (who fears he will be called upon to attack the officers taking part in the coup of 2/26/36) and his wife. There is even a film version (directed by and starring Mishima himself) that can be viewed online for free,

Kita Ikki expounded his ideas in two major works: KOKUTAI RON OYOBI JUNSEI SHAKAI SHUGI ( National Polity and Pure  Socialism, 1903) and NIHON KAIZO- HO-AN TAIKO- ( An Outline Plan for the Reorganization of Japan, 1923). In them, he promotes an “Asian Nationalism” (as Breitbart News promotes White Nationalism) in which Japan shall be the leader of a United Front of Asian peoples. In order for Japan to take on that role, however, Kita Ikki believed that Japan would have to free itself from the control of corrupt political, business and media “elites” (sound familiar?). If Japan were not able to free itself from what he deemed to be weak, ineffective, liberal rule, it would never be able to fulfill it`s national mission or achieve it`s national destiny (leadership of Asia) – and would eventually fall under the complete domination of the “Western Powers” (Just as Bannon`s Breitbart News suggests that Western Civilization is doomed to be defeated by radical Islam while corrupt elites and liberals – usually referred to by as Libtards (?!) by those who leave comments on their site – rule. They are apparently calling for a coalition of white Christians in Russia, the United States, etc. to fight off what they call Islamo-Fascism. 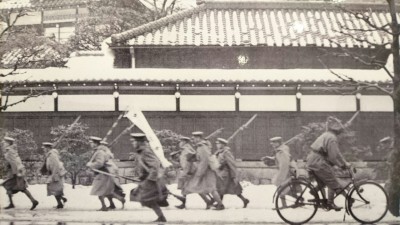 Kita Ikki wanted to make Japan great again (again, sound familiar?) – reclaim the energy and glory of the late 19th and early 20th century Japan in which the country had great military successes against both China and Russia – and made tremendous strides in science, technology and nation-building in general. He saw the liberal years of Taisho Democracy (1912-1926) as a weak and muddled period , with corrupt, effete and incompetent men in charge – and a media (especially the Asahi Shimbun, Japan`s equivalent of the New York Times) as the enemy of the people. (sound familiar, yet again?)

Kita called for a coup d`etat  so that the army could declare martial law and free Japan from the tentacles of this “evil” establishment and make possible a direct link between the Emperor and the People (long before Twitter let Trump “speak directly to Americans”). 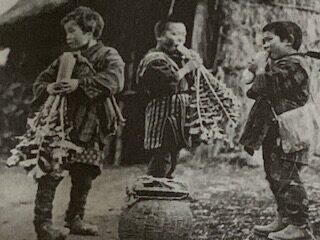 Young boys in the Tohoku (Northeastern) Region of Japan gnawing on daikon radishes in the 1930s. Many of the fanatical troops involved in the 2/26 coup attempt came from desperately poor families in the Northeast, the region hit hardest by the depression of the 1930s. While many daughters were sold to brothels to keep their parents from starving, sons could find an escape in the Imperial Army. Some ended up becoming devout followers of Kita Ikki and his Japanese brand of National Socialism

Under Kita`s inspiration, 1,400 hundred soldiers took control of central Tokyo on February 26, 1936.  They then set out to assassinate certain establishment figures who were on their “hit-list”. They succeeded in killing the Finance Minister Takahashi, Lord Keeper of the Privy Seal Makoto Saito and the Inspector General of Military Education. Others on the list, including Prime Minister Okada (whose brother-in-law was mistakenly cut down instead) and Grand Chamberlain Suzuki Kantaro, survived their injuries or escaped unharmed. After the first phase of their plan had been carried out, the men leading the coup (all of them either junior officers or discharged junior officers) called for a new cabinet to be formed – one that would carry out the reforms  they sought.

Certain officers in the upper-echelons of the Imperial Army sympathized with the coup and recommended that the demands be met, while others, while not supportive, were hesitant to suppress the rebels by using military force in central Tokyo and thus setting off a mini civil war. This gave the rebels a misleading sense of confidence in the success of their plan – and in the fact that power would soon be restored to the Emperor and the People.(as Bannon believed that Trumps stunning electoral college victory would give him the chance to create chaos (perhaps even martial law) and go ahead with “deconstructing the administrative state”.

When Army Minister Yoshiyuki Kawashima  released a statement supporting the “patriots” and then the Tokyo garrison expressed its support as well, the coup leaders must have thought that they had won ( as those who tried to meddle in the US election by spreading false information or releasing damaging material they had hacked believed their victory was complete at the moment the election was over). Things were far from over, though. Despite the enthusiastic support they had from certain quarters, at the highest levels of  military leadership there was strong opposition to what was going on (think of Generals Mattis and McMaster`s attitudes towards many of Trump and Bannon`s ideas on NATO, relations with Russia, etc.). 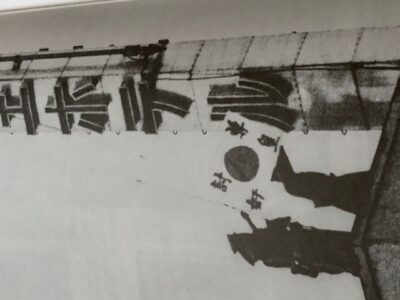 A banner being hoisted by rebellious officers atop the old Hotel Sanno (in Akasaka) which they had commandeered as their headquarters. The banner reads：尊皇討奸 , SONNO TO-KAN - Revere the Emperor – Defeat the Evil Ones. As a shift of the famous slogan from the Bukumatsu Period: Sonno Joi (Revere the Emperor – Expel the Barbarians ) – we again see a similarity between the February 26ers and the Trumpists: The threat is not external – it is within! The evil ones among us must be purged in order to achieve our goal :  Saving the country (or taking it back) so the Divine Leader can rule unhindered by a swamp of corrupt bureaucrats, politicians and businessmen.

Importantly, Emperor Hirohito, deeply disturbed by the murder of his closest advisers (carried out in his name, by those who supposedly revered him), broke from his traditional role of political neutrality and insisted that the rebel`s demands be rejected. (which reminds me of how Pope Francis – and is not the 2,000 year old Papacy the nearest equivalent there is to Japan`s 2,000 year old imperial-line – has been an active opponent of many of Mr, Bannon`s ideas.)

Hirohito refused to have any direct communications with the rebels, and ignored their calls for him to demand their ritual suicide. Martial law was declared on February 27th, The next day, after reinforcements (and the Imperial Navy!) had been brought in, the emperor gave the order to have the rebels removed. Tanks rolled down the streets of central Tokyo and thousands of crack troops took up position. The Army was still reluctant to turn the capital into a battleground and force was considered a last resort – to be used only if negotiations failed. 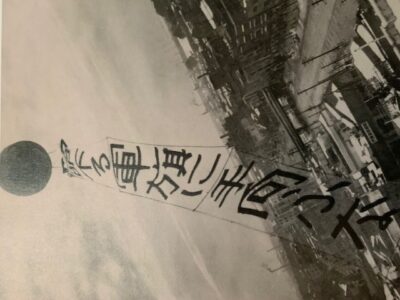 In an attempt to get the rebels to surrender, a campaign of intensive psychological warfare was waged. Messages were broadcast over the radio, leaflets were dropped from planes – even advertising balloons were used (see photo) to try and convince the  rank and file soldiers involved in the coup to give up the cause and return to their barracks. They were offered a pardon if they did so. And guess what? That did the trick (though no one ended up being pardoned!). At around noon on February 29th, most of the men surrendered – after their commanding officers had done nothing to stop them. A few of the officers then killed, or tried to kill themselves. The rest were arrested. 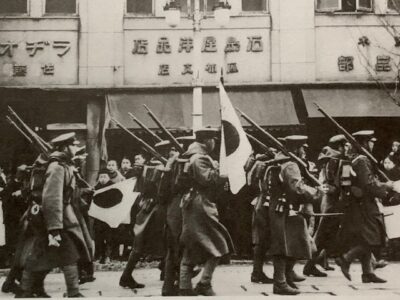 I wrote this article four (very long) years ago, but rereading it today, it seemed more relevant than ever (in light of what happened on January 6, 2021 in Washington D.C.! 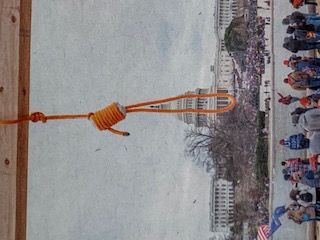 The 1/6 Incident of 2021 – Fanatical supporters of Donald Trump set up this ominous scaffold with a noose hanging from it, as rioters inside (and outside) the Capital Building chanted “Hang Mike Pence! Hang Mike Pence!” –  because he didn’t go ahead and steal the election for Trump. Calls for “Revering Trump and Destroying the Evil Traitors” (though not exactly in those words) – and much else that went on that day – were uncannily reminiscent of Japan’s 2/26 Incident!

How the 1/6 Incident resembled the 2/26 Incident

There were calls for a coup (by Michael Flynn, The Pillow Guy (HAHA),Rudy Giuliani, etc.)

Crowds chanting the equivalent of the 2/26 battle cry – REVERE THE EMPEROR, DESTROY THE TRAITORS (WE LOVE TRUMP – DESTROY HIS ENEMIES)

Support in high places – The would-be Trump Coup-sters same had the same sort of supporters high up in the military, police and government as the 2/26 would-be coup-sters. Just think – despite all the warnings of violence for that day not A SINGLE extra officer was put on duty at congress on that day – and it took hours to get that additional help.

For more on how the MAGA movement seems to modelled after the Japanese Far-Right and Cosplay culture!