Enjoy a Bitter Beginning to Spring with Fuki no To- (蕗の薹), One of Japan`s beloved Wild Vegetables (sansai, 山菜) 9 February, 2021 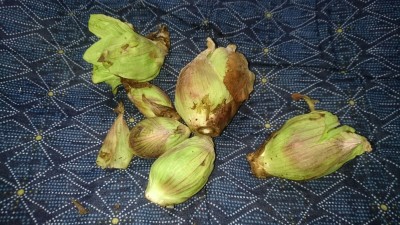 Fuki no to- (butterbur sprouts) that I received as a gift from Junko K. Highly anticipated harbingers of spring, many Japanese try to savor their slightly bitter flavor at least once in February, as a celebration of the season – and as a late winter “de-tox”!

It can be said that “seasonality” is the most important concept in traditional Japanese culture. Whether you are writing a letter, decorating the alcove in your Japanese style room, picking out the colors you are going to wear, composing a poem, or selecting an annual festival to attend, having an awareness of, and celebrating the season ( not only the wider four seasons, but each of their distinctive beginnings, middles, and ends) is how the Japanese have made life beautiful, spiritual – and fun, long before the introduction of modern conveniences, entertainments and distractions.

More than anything else though, Japanese seasonality is celebrated by eating in-season (shoon, 旬) fruits, vegetables, fish and sweets. 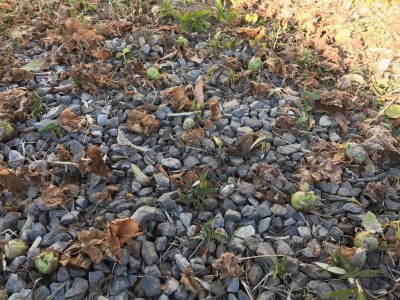 Even in this day and age, when almost anything is available all-year-round, many Japanese try to stay in touch with the seasons and traditional cycle of events by enjoying the “classic” eats of the season – even if just once a year.

In February, one of the anticipated foods is a wild vegetable (one of several commonly eaten in Japan) that is extremely bitter, no matter how you prepare it. Still, as the first new vegetable to appear at the beginning of the new year, they are eagerly anticipated, and their bitterness relished –  the taste even believed to represent a cleansing action, that removes all the toxins that have built up in your body over winter. 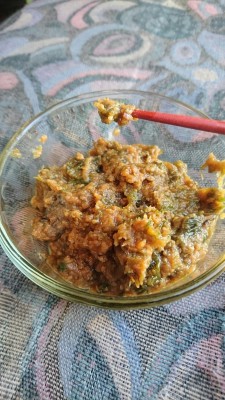 Fuki no to- are best when just picked, so just after having gotten them, I prepared this fuki no to miso, one of Japan`s representative tastes of February.

I`m talking about FUKI NO TO- (蕗の薹), which the dictionary tells me are called butterbur sprouts, in English. They are one of the handful of classic SANSAI (wild vegetable) that the Japanese have enjoyed (and still do) from early spring thru summer.

Fuki (butterbur), the adult form of this vegetable, are more commonly eaten, (especially the stems), but their sprouts, which appear in February or March (depending on your location) are  loaded with more nutrients (potassium, phosphate, iron) – and were thus extremely important in past ages when getting proper nutrition was a major concern.

Many Japanese remember the trauma of their first tastes of fuki no to- so bitter that they thought they`d been poisoned! But the connection with the season and the coming of spring remain strong – and the  very same people who scrunched up their faces in disgust as children slowly savor these sprouts every year as adults (they are an especially good accompaniment to Japanese sake!) 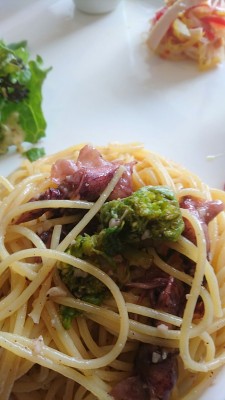 The chef at Quattro, an Italian restaurant in Matsushiro, Tsukuba, always remains conscious of Japan`s season`s – here is his fuki no to pasta!

I was lucky this year. My friend Junko K. discovered dozens of fuki sprouts growing in her back yard ! After returning from her usual early morning walk, she went into the kitchen and started preparing breakfast – with the radio on. The NHK broadcaster mentioned that the fuki sprouts were already appearing here and their across Japan…. so Junko took a peek out her window… and  VOILA!  There they were. And as part of Japan`s beautiful culture of sharing in the bounty, a few hours later, I was kindly given some of the precious sprouts.

Since it is best to prepare them as soon as possible, I prepared a classic fuki sprout dish that very evening – fuki no to miso (though they are also commonly eaten as tempura)

First I washed the sprouts

boiled them for about three minutes,

soaked them for 3 minutes,

and roughly chopped them.

Then, separately, I prepared the miso mix

Then I sauteed the sprouts in sesame oil and added the miso mixture and cooked until liquid evaporated.

When it was ready, I poured myself a little cup of some good local sake… took a dab of the paste on my tongue… and mmmm…. I got into the season! 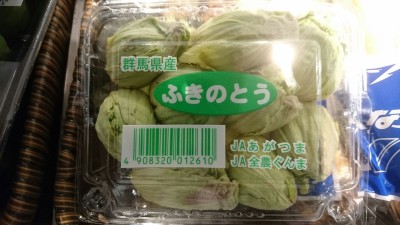 Fuki no to on sale at my local supermarket. 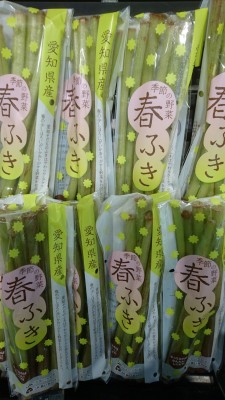 The stalks of the mature fuki plant look like slender stalks of celery.