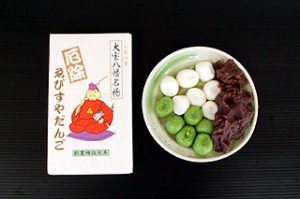 However, some people in certain neighborhoods of Tsuchiura city ( and other parts of Ibaraki Prefecture), more specifically MEN at what has traditionally been considered their UNLUCKIEST AGE (42),  go out AFTER their BEAN-THROWING  CEREMONIES  for an extra ( and quite rare) event- what is known as DANGO-BURUMAI (だんごぶるまい）- or a rice dumpling presentation party. These are usually held at  Japanese style restaurants or pubs, and the 42 year-olds are joined by their best friends, male neighbors, and closest male relatives. In some neighborhoods all the men of unlucky age ( if there are more than one) are invited out for this occasion by the other men in the neighborhood.

As the name of the event suggests, the 42 year-old special guests are given DANGO- little balls of pasty rice, a traditional snack which is eaten or given away on the occasion of reaching an unlucky age. In fact,  each 42-year-old man receives 42 of them!

And something which you might find more surprising- besides the DANGO, each SPECIAL GUEST will receive some new underpants! That’s right- a gift of underpants from their male friends! Sounds strange! But let me explain.

In Ibaraki Prefecture, it was customary for 42 year-olds to visit a shrine at or around SETSUBUN ( Feb. 3rd), get rid of their old underwear, put on a new loincloth ( fundoshi), and stuff it with rice cakes ( mochi) and coins. They would then walk in such a way that the objects in their crotch would fall out. They should not LOOK BACK as they do this.

As the coins and rice cakes come tumbling down, others scramble to pick them up off the ground. This is considered to be very lucky, especially for young boys ( though you sure as hell wont find me touching stuff that has fallen out of anyone’s loincloth!).

Though the practice of DROPPING certain items- mochi, dango, TENUGUI handkerchiefs, coins or articles of clothing IS still practiced by some people in certain parts of Japan, the custom of first stuffing them into the loincloth is not common at all any more ( though it does still exist). 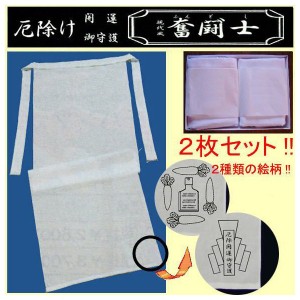