Hotoke no Za (仏の座)- a harbinger of spring which can also cause some confusion for those interested in Japanese nature and culture 23 February, 2021 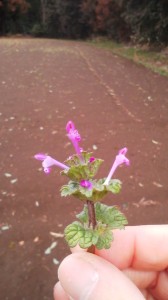 A hotoke no za flower in bloom

Walking in Tsukuba`s wild places in winter can take some determination. Though there is no snow on the ground and the temperature readings on the thermometer are really not very low, when the chill wind starts to blow ( and it does so often), your hands and face can sting and burn, making a leisurely stroll quite uncomfortable.  What makes it even harder to plow on through these frosty gusts, is the depressing lack of color. While local residents as well as the local government keep things cheery in parks and around homes, offices and the major thoroughfares – with plenty of plants that blossom or bear fruit in winter- including sazanka, nandian (nanten), and various citrus trees, the areas which are not looked after by humans, look mostly dried out- all browns and straw color. 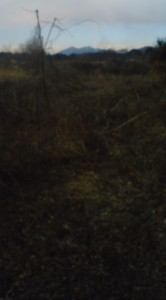 Yesterday, while I was on my way to check on just exactly where our neighborhood goshawks ( O-Taka) would be nesting this year ( they have used several different trees in the past), I regretted not having taken gloves and a warmer jacket. I kept my hands in my pockets and face turned down and out of the wind.

Happily I ran into my neighbor, Takahashi-san who  also happens to be very interested in what these noble birds are up to (in fact it is due to her unflagging efforts that they still live around here at all) !

As we shuffled along the road together, gravely contemplating the future of this amazing part of Tsukuba, snowless winter-scapes stretched out in every direction.

Then, an excited, high-pitched, cry from Takahashi-san – HOTOKE NO ZA ! – which came so suddenly and with such enthusiasm that my heart almost stopped.

When I looked over, I found that she had in fact already leapt down into a small depression by the side of the road. She was pointing at a low-growing plant with tiny purple flowers protruding on top. Before I could protest, she pulled the little blossom out of the ground and handed it to me saying- SPRING IS HERE!

I looked at the flower closely. It was really quite amazing ( for a plant considered by many to be a weed), and I could see right away why it was called HOTOKE NO ZA, which means Buddha`s Seat or Buddha`s Throne. It is because its slender, vertical, cone-like flowers, seem to rise right out of the nearly horizontal leaves creating the image of little Buddhas standing or sitting on  lotus leaves.

From February through June these flowers will be blooming along roads, by the fields, and in the wilds across most of Japan( though not in Hokkaido), sometimes forming purple or pink carpets.

The hotoke no za, which has the scientific name Lamium amplexicaule L., has the habit, of being fooled into blooming by the warm weather of an Indian Summer, and can sometimes be found blooming in  December or even November. The weather has not been especially warm around here recently, but when I got down on my knees for a closer look, I noticed the ground covered with these same plants just about to burst into bloom. These will be important for setting the activities of spring into motion as they are some of  the earliest bloomers of the year and an important pollen source for bees. 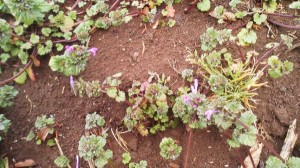 A cluster of hotoke no za as seen from above

Still as we started walking again and  I started to slowly twirl the little flower by the stem in my hand, I began to think about this plant and its name, and also about the reaction that it aroused in my neighbor. I was reminded once again of how very complicated the Japanese language and culture can be – and realized that in this case- a misunderstanding could make things could get dangerous!

The plant name HOTOKE NO ZA evokes images of spring in just about every Japanese adult. That is because it is the name of one of the SEVEN GRASSES OF SPRING (haru no nana kusa) which are eaten in a porridge on the seventh day of the New Year. 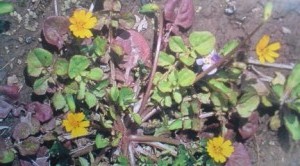 Ko-oni-tabirako, which are one of Japan`s seven plants of spring

So don’t put it in your seven herb porridge!

So now that  we know you are not going to eat them, keep your eyes open for these unusual flowers- they are harbingers of spring! If you do spot some, crouch down, or get on your hands and knees for a closer look. Don`t let something so beautiful just slip by under your nose! 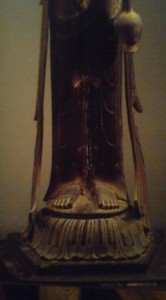 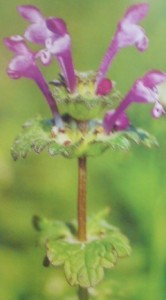