The Ritual Firing of Arrows at the beginning of the year- For Driving Away Misfortune, Forecasting the Harvest, and occasionally for CURSING THE NEXT VILLAGE 18 January, 2021 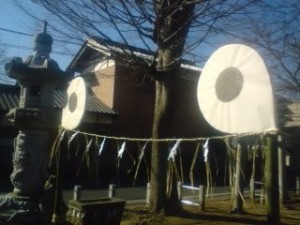 On the morning of the YABUSAME ceremony ( the second Sunday of January- the 13th, this year), these targets, made of bamboo and paper are set up in front of the Hachiryu Jinja Shrine. The deity enshrined here is TAKAOKAMI NO KAMI （高龗神), who is connected with water and rain.

Besides its importance as a weapon, the bow and arrow has been extremely important for RITUAL PURPOSES in Japan. If you have visited a shrine at the beginning of the new year, you have probably noticed all the people buying HAMAYA ( LUCKY ARROWS- with knobby tips), which are taken home in the belief that they will bring one year of good luck. I guess it would be easy to find a symbolic significance in these arrows- images of shooting into the future, defeating ones enemies, and fertility and sexual potency as implied by its phallic shape.

It is for a different reason, however, that both arrows AND bows have played an important role in driving away impurities, misfortune, and evil spirits. It was in fact THE SOUNDS THEY MAKE – the twang of the bow, and the whizz of the arrow shooting through the air, that they were believed to be effective.

The Azusa Yumi ( catalpa wood bow) was an essential tool in Japanese Shamanism for exorcising evil, and shooting ritual arrows was an important part of the imperial court`s New Year`s Eve purification rituals during the Heian Period- The TSUINA ( which was introduced from China).

Bows were also twanged at the Imperial Palace to drive away evil spirits whenever a child was being born to the Emperor. 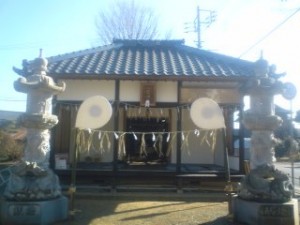 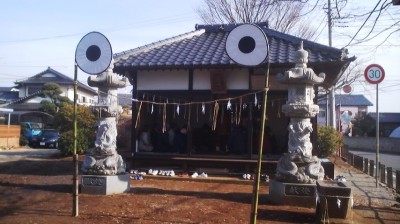 One year later on the day of the ritual-the targets seem to have been set a bit higher. This is probably why there was so much hitting the target this year

In the twelfth century, with the ascendancy of the warriors and the foundation of the first Shogunate (in Kamakura), the ritual firing of arrows played an even more prominent role- in YABUSAME ( pronounced- yah boo sa meh), the shooting of targets by archers mounted on galloping horses. This was NOT just a form of target practice but an offering to the Gods and a prayer for improved skills and victory in battle.

Yabusame was also considered to be a powerful ritual for purification and divination of the future. The target boards broken by the ritual arrows wood be taken home ( much as today`s HAMAYA), as good luck charms.

This tradition of shooting ritual arrows for driving away evil and divining the future still lives on in Japan, especially here in Ibaraki Prefecture and especially around New Year`s time ( as the first fired arrow of the year is considered to be especially effective in predicting the future). 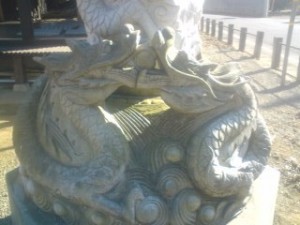 The name HACHIRYU JINJA means the EIGHT DRAGONS SHRINE- there are appropriately many dragon motifs found on and around it ( these are at the base of the stone lanterns). Dragons (as well as snakes) were believed to control WATER- helping give water for irrigation, but also causing floods.

For divining the future, pictures or kanji characters are drawn/written on paper targets. These might depict three-legged crows, rabbits, or even demons.

Shooting the demon target is obviously for driving away evil ( like the ancient TSUINA ritual of the Heian Court), but when the crow ( representing the sun) and the rabbit (representing the moon) depicted on the same target are shot at, it is a form of divination. If the characters are hit in the correct order SUN-MOON, it means a good harvest, if its MOON-SUN, it means trouble. 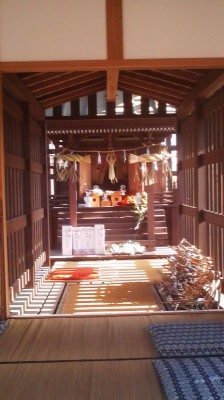 A few hours before the ceremony- a look into the shrine 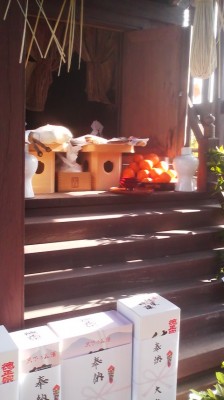 Offerings set at the altar on the day of the ritual 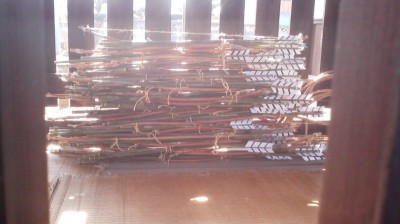 Peeking into the shrine before the ritual, I could the hand-made bows (made of a tree called UTSUGI- which supposedly has the power to drive away back energies) and arrows ( made of bamboo)

In the Tsukuba Area there are several very rustic  ARROW SHOOTING rituals held at the beginning of the year. Last year I attended one, at the HACHIRYU JINJA Shrine (八竜神社) in Nakane, this past Sunday ( it is held on the second Sunday of January each year). And once again this year. 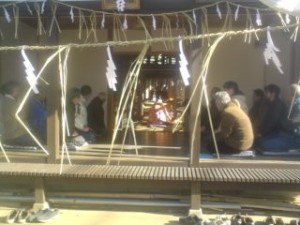 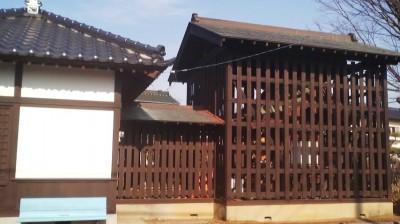 A view from the side. The priest, in orange, can be faintly seen kneeling and making offerings

When I arrived at the shrine, before noon, not a soul was in sight. There had obviously been a lot of activity earlier on in the morning. Just in front of the shrine`s wooden hall, which was all opened up and decked out with offerings of sake, fruit, and rice, two interesting targets had been set up. These had been crafted from bamboo and paper. There were no kanji characters or pictures on them. Just one very large BULLS-EYE on each one, making for very easy targets.

Standing on each side of the shrine`s hall they looked like two eyes, or even a pair of ovaries ( to be shot at by phallic arrows). 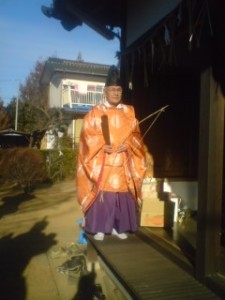 The Kanushi ( Shinto Priest) holds his home-made bow after hitting the bull-eye twice at the Yabusame Ceremony at the Hachiryu Jinja Shrine in Nakane, Tsukuba

It looked like it would be a while before things got underway, so I examined the shrines grounds finding that the trees and smaller halls and sacred stones had all been bedecked with fresh strips of white SHIDE paper, which is believed to keeps impurities out. I found the large flat stone which was once apparently used for AMAGOI (rain supplication) ceremonies. Before that it had probably been a lid to an ancient grave. More than a thirteen hundred years ago when this area was formally developed and incorporated into the Yamato Empire (based in Western Japan) this spot became a place to pray for rain (which was necessary for the success of the newly developed rice fields) and for calm ( by which I mean- no floods) in the nearby Sakura River. I thought about this as I waited.

I learned from someone in the neighborhood that passed by that from noon, one male representative of each house in the neighborhood, (15 in all) would be having lunch with the Shinto Priest ( who is called in for this ceremony every year) over at the village meeting hall ( SHU-KAI JO).

When at about one hour later they finally came walking to the shrine, I realized from the red glows on their faces that they had also been doing a bit of drinking. 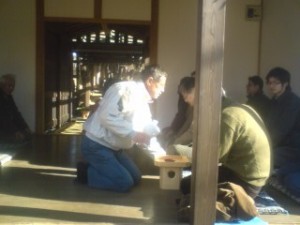 After each participant has offered SAKAKI sprigs to the shrine, ritual sake (O-MIKI) is drunk

The fifteen men stepped up into the shrine and seated themselves on cushions. The priest entered deeper inside, to the HAIDEN ( prayer hall) and began chanting NORITO prayers. This continued for about ten minutes. The priest then offered a sprig of SAKAKI leaves. When he finished, each parishioner (UJIKO), one by one, got up, approached the prayer hall, offered a SAKAKI sprig and prayed ( by clapping and bowing).

When everyone had taken their turn, O-MIKI (ritual sake) was served. 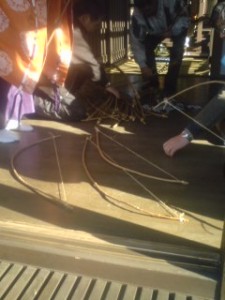 Then the fun began. Earlier in the day ( I later heard), one of the UJIKO had fashioned a couple of dozen sets of bows and arrows. The former from the twigs of UTSUGI trees ( a tree which in this area is traditionally grown at the boundary between two fields), and the latter from reeds and paper.

First it was the priest who picked up one of the bows. He looked uneasy at first ( I mean, he was under alot of pressure!), and he did take his time. But when he finally did LET IT GO, he fired a strike right through the center of the target.

Everyone present let out with a jubilant HOORAY! 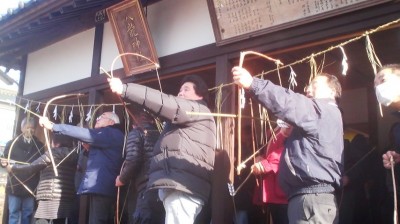 Ready, aim….. as opposed to the previous year it took a long time for the participants to hit the targets this year- many of the bows also broke- something that did not happen last year 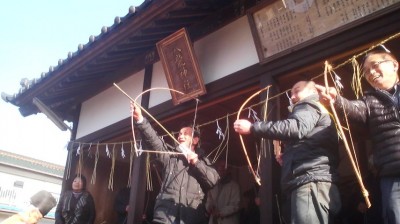 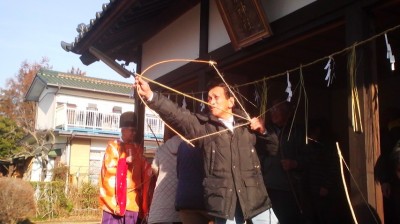 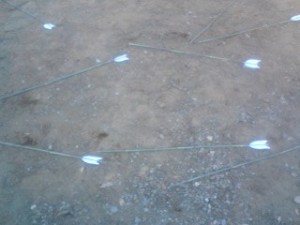 Ritual arrows lie on the ground after having been shot through the bamboo and paper targets. These are then taken home and are said to guarantee plentiful water for one full year

He then picked up another arrow, and this time with more confidence quickly aimed at the other target and fired- another bulls-eye!

Then, one by one, each of the parishioners took their turn and took a shot. Most of the arrows ht their mark. With all the alcohol which had been consumed and all the fun of this BOYISH activity there was a true sense of thrill in the air.

When I commented to the men that they did a good job, one boasted: Its just like making babies- and I practice doing THAT everyday!

And indeed this ceremony seemed to me to be an ancient fertility rite. 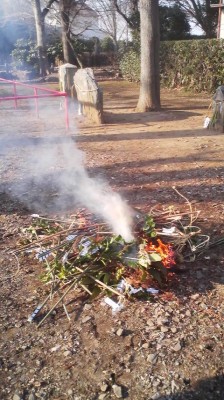 Immediately after the ceremony, everything that was used was burned on the shrine grounds 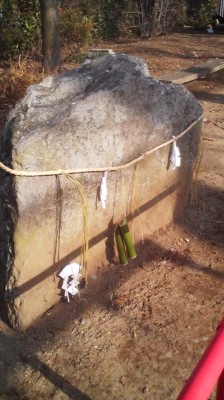 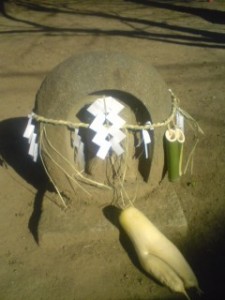 A two-pronged radish ( FUTAMATA DAIKON) left as an offering in front of a DOSOJIN stone ( on the grounds of Nakane`s HACHIRYU JINJA SHRINE This is a very localized tradition and is done to pray for healthy legs.

The priest, however, told me a different story about the origins and meanings of this ceremony. He said that while some other ARROW ceremonies in the region are quite ancient, this one was about 100 years old. It began as a result of a conflict over water with the neighboring village of Kami-Sakai ( such conflicts were common until recent years and these water problems were one reason way the Tsukuba area remained a BACKWATER for so long).

The farmers in Nakane needed water which Kami-Sakai had, but the other village didn’t want to share.

This ceremony was therefore established as a kind of curse on the next village –  with the arrows being fired in its direction. 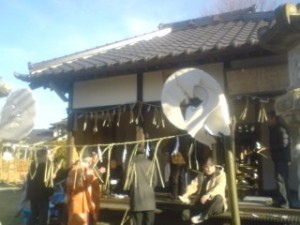 The targets, torn up by the arrows, as they stood at the end of the ceremony

Before everyone went back home, the priest told us that if we took one of the arrows which had been fired in that day`s ceremony home it would mean that that home would have GOOD WATER IN SUFFICIENT AMOUNTS for one year. 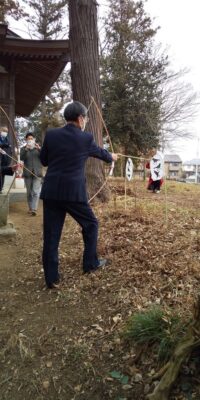 Taking aim at three–legged YATAGARASU crows at the Katori Shrine in Shimana, Tsukuba (2021) . You would think that at that distance (point-blank) the target would be easily hit – think again! 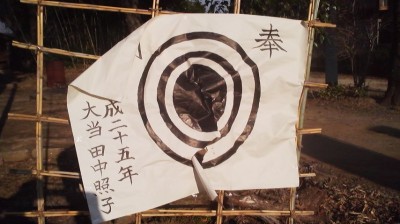 A few days earlier a similar event was held at a nearby Yasaka Shrine- the target was still standing on Jan. 13th 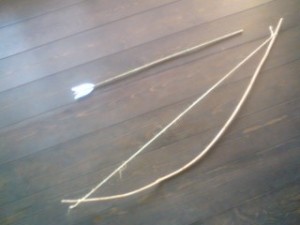 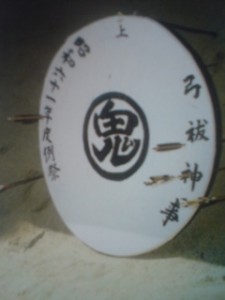 A paper target with the character ONI- demon, written as its bull`s-eye 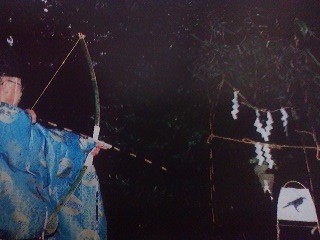 Priest shooting at a three-legged crow (YATAGARASU) in Toride, Ibaraki 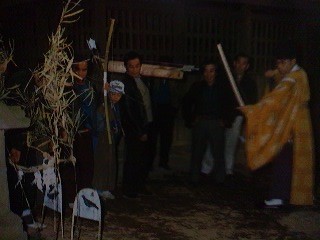 Shooting arrows at crows as a prayer for abundant harvests 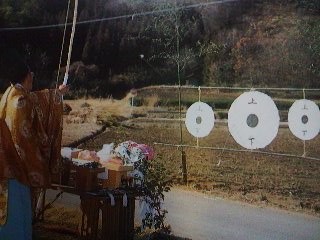 Divining the quality of this year’s harvest 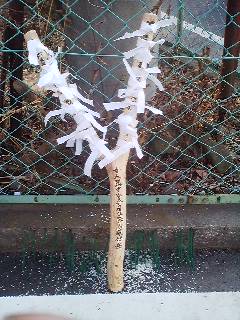