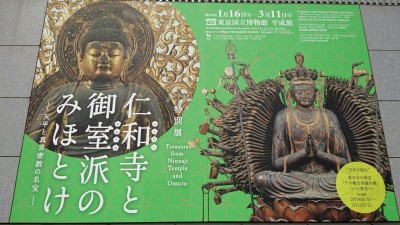 The highlight of this dizzying extravaganza of an exhibition was the 8th century 1,000- Armed Kannon brought over from the Fujii-dera Temple in Osaka. It is perhaps the oldest extant Buddha of its type in the world – and it really has 1000 arms! (most thousand-armed Kannon have only 42) – but most importantly (for the visitor), it is astoundingly beautiful when viewed in person. Unforgettable.

For long before I ever imagined living here in Japan, I had been under the impression (from books I`d read and movies I`d seen) that this was a land of Zen Buddhism, where practitioners of the faith trained their minds (using meditation) in very simply decorated surroundings in order to attain a higher state of understanding and spiritual being. Then, after I had made the decision to come over here (to study at the University of  Tsukuba) I started reading up on the culture and learned that another Buddhist sect, Jodo Shinshu, was in fact the religion with (by far) the more adherents. This sect did not involve the rigorous training I`d associated with Japanese culture at all – in fact it seemed quite simple – it preached that all men and women would be “saved” through faith in the Buddha Amida. The most important practice for this sect was the chanting of NEMBUTSU – NAMU AMIDA BUTSU, NAMU AMIDA BUTSU…. again and again (anyway, that`s how I understood it at that time.)

When I finally got to Tsukuba, though, I found hardly any Zen or Jodo Shinshu at all. Most of the temples around where I lived belonged to the Shingon Sect, a school of Mikkyo (Esoteric Buddhism), with ancient fire rituals, mandalas, lots of Sanskrit letters – and a wide variety of carved deities that reminded me more of Hinduism than Buddhism. Something else that I found different about this type of Buddhism was that rather than individual salvation or hope for an other-worldly type of gain, Esoteric Buddhism was practiced as a way of working magic on this world. It was used by emperors, aristocrats and warriors in the belief that it would affect real changes – help defeat enemies… protect the realm….

I have been intrigued by this sort of Buddhism ever since – and have come to feel a special closeness to it.

That is why I didn`t want to miss the big exhibition of Esoteric painting, sculpture, calligraphy and ritual utensils held at the National Museum in Ueno from January 16 to March 11th 2018. Many National Treasures were going to be among the works on display, and some of them were “hidden Buddhas” which were kept out of view for most of the year (or for decades) at the temples where they usually reside. 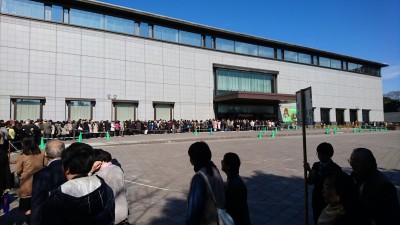 There was a 40 minute wait to get into the Heisei Kan Hall (at the National Museum in Ueno) on the day I went there – luckily I had a bag full of good books with me!

While the main focus of the exhibition was on objects usually kept at Ninnaji, Kyoto (established in the year 888), a temple which became a private temple of sorts for generations of retired emperors (beginning with the Emperor Uda at the beginning of the 10th century, what I really wanted to see were the various “Hidden Buddhas” that were assembled from various esoteric temples in Japan. No doubt the letter in the hand of the Emperor Takakura (dated 1178) or the Sanjuro Sasshi ( 9th books of Esoteric scripture – written in part by Kukai, the founder of the Shingon Sect, himself!) and other treasures would be nice to see – but with saw many works like them (there are a total of 174 works on display in this massive show!), in such crowded conditions, were sure to be a strain on my eyes! So I what I really looked forward to was the BIG STUFF.

And I was not disappointed! 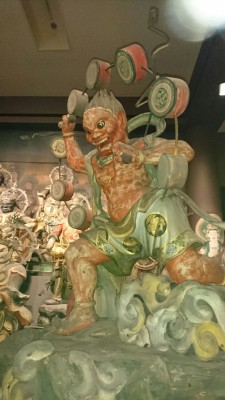 A statue of Raijin – in the only room in which photography was allowed. Though not one of the more outstanding pieces in the show, it reminded me, as an image of the “Thunder-maker”, of the important role thunder and lightning played in the folklore, as well as the everyday lives of the people who lived in the Tsukuba area in ages past. For a description of how at the first distant clap of thunder (or flash of lightning) local farmers would rush home (no matter what they were doing) and get in under the mosquito net (with the entire family), light incense and chant sutras till the danger was past, read my translation of Junichi Saga`s Remembrance of Village Days Past .

As usual for such an exhibition, the crowds were crushing. I had to wait 40 minutes just to get in. Once Inside the Heisei Kan Hall though, conditions got much worse. Thousands of people, mostly retirees ( I went on a weekday) were lined up in rows many layers deep in front of the display cases.

I had to be selective in what I tried to see. I worked my way in to see the portrait of the Cloistered Emperor Uda (15th century, the magnificent lacquer scripture box with inlaid hosoge flowers and karobinga birds (10th century), the Peacock (Kujaku) Myo`o painting from China (10th-11th century) and the Reliquary in the shape of a flaming jewel (13th century). Most of the calligraphy, paintings, and even the important illustrated picture scroll they had on display, I just passed over with the most cursory of glances. I wanted to make my way to the large statues – and when I got there I realized I had made the right decision. I found works which were not only curious and beautiful, but so tastefully lit by the curators, that it would be almost impossible to achieve the same effect in a photo (and that`s why I didn`t buy the exhibition catalogue – the statues looked so bland compared with what I saw under the the lights with my own two eyes. Especially well-illuminated were the Five Seated Wisdom Nyorai (12th century) from the Kongoji Temple in Osaka and the highly unusual (and gigantic) Standing Gozanze Myo`o ( a deity I had never heard of!).

Of special interest to me were magnificent versions of deities which are so commonly (and rustically) found in the Tsukuba area – the Nyoirin Kannon (shown seated with head resting in the palm of one hand) an the horse-headed Batto-Kannon(who in Tsukuba is almost always rendered in Chinese character alone, engraved in stone.

The piece de resistance, what I had really come to see, was the Thousand-Armed Kannon from the Fujii Temple in Osaka. It was beyond satisfying, beyond making the trip into Tokyo and battling the crowds worthwhile. It was an encounter with a beauty that I feel will stay with me forever (I wish I were able make it back to the show tomorrow – the last day – but I can`t.

This 8th century wooden sculpture of highly complex design is probably the oldest extant Thousand-Armed Kannon in the world – and it is also unusual in the fact that it actually has 1000 arms (more than a thousand, if you actually count them!) It has eleven faces, as well! The compassion that the sculptor (or sculptors) embued this work with perfectly convey the meaning of all those arms and faces – that the Kannon was so disturbed by all the evil and suffering in the world that his/her head split up into eleven parts – all the better with which to hear and see the suffering. The thousand arms are to do something to help. Many of the arms (or hands, I should say) bear weapons or tools which the Kannon can use to stop suffering and fight evil. There is a sword, a halberd, an arrow, a bow, a vase, a whisk, a bell, a cloud, a seal, an ax, a vajra, a lasso, a bud, a lotus, a mirror, a jewel, a wheel, a trident, a skull on a pole, a rosary and even a bunch of grapes!

Today is the last day of this astounding exhibition. If you have some time, go to Ueno. Bring some books to read while you wait on the long line – and one inside head right to the end the show. After seeing the Thousand-Armed Kannon etc. you can backtrack and see whatever you can slip in through the crowds to see!

Here is a link to official exhibition website, with explanations and pictures – but trust me – the photos don`t compare with what the works look like under the tastefully set up lights!