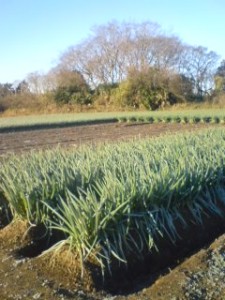 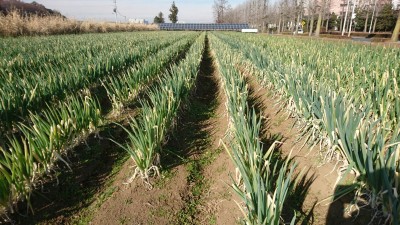 Snow rarely falls anymore in Tsukuba ( or anywhere else on the Kanto Plain), and instead of traditional, white winterscapes we have, besides the abundant roadside sazanqua in bloom, and the bright citrus fruit hanging out over the walls of Tsukuba`s big old  houses, a rural scenery of  mostly dull browns and straw color. Just about the only healthy GREEN we do have in our abundant fields in this season is created by rows of NEGI ( 葱), which till recently , I have referrred to as leeks, but have discovered should more correctly be called welsh onions. 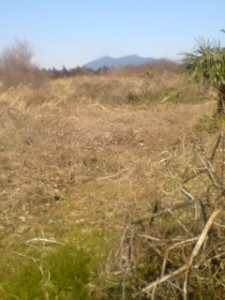 In my neighborhood there are numerous negi fields, and when the wind is blowing in a certain direction it carries their delicately pungent smell to my door. This distinctive fragrance is a constant companion on brisk winter dogs-walks.

The local farmers start to harvest this vegetable in late November, but they tell me that it is the frost of late December which gives them a deeper, richer flavor, and in my neighborhood they will be taken from the fields little by little until they start to flower ( and thus become inedible) in early spring. This is perfect timing, because negi is a key ingredient in the style of WINTER COOKING which has kept the Japanese warm and satisfied for generations ( even though their houses were not heated!) throughout the chilliest months-  I`m talking about NABE MONO ( 鍋物), Japan`s great variety of hot-pot dishes ( or should I say stews?). 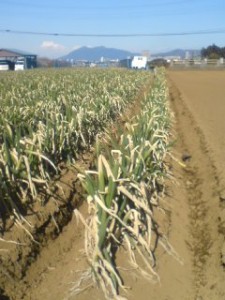 Besides its use in NABE and SUKIYAKI, NEGI plays a key supporting role in general everyday Japanese cuisine. Raw and diced, it is the usual condiment for soba ( buckwheat noodles), hiyayako ( blocks of chilled tofu) and natto ( fermented soy beans), and it is also usually put into miso soup. One of the more popular types of  yakitori ( grilled chicken), called NEGIMA, features bits of negi skewered between each piece of chicken.

Negi might just be too COMMONPLACE to usually be given any serious thought, but while I walk my dog, basking in their aroma, I cant help but contemplate the mystery of how and why bits of culture are transferred from place to place, and then thrive in some locales and fail in others.

Negi, like its relatives: garlic, onions and Chinese chives ( nira), was first cultivated in central Asia ( in negi`s case in what is now China – the welsh of the English name “welsh onion” does not refer to wales. It is a prefix meaning foreign- as in “foreign onion”). It was introduced to Japan sometime in the 5th century and soon became an important crop.

The interesting question is- why did negi become the favored AROMATIC vegetable for cooking in Japan (as opposed to garlic and nira), while in China the stronger garlic and chives , as well as the milder negi , are all of equal importance in cooking. Korea, is of course also famous for eating garlic. What was it, a general aesthetic sensibility, which lead to this difference in eating habits? ( the same interesting question is raised by chili peppers- first introduced to Japan by the Spanish ( from Mexico), they were then carried to Korea by Hideyoshi`s invading armies ( in the 16th Century). The chili pepper went on to be a major component of Korean cuisine, while in japan it was hardly used at all.

Another question that come to mind is why onions ( tamanegi), which were originally cultivated in  central Asia ( west of China) spread very long ago to the west, travelling to and taking strong root in the Middle East and Europe, while it did NOT spread ( until modern times) eastward, to East and South-East Asia? 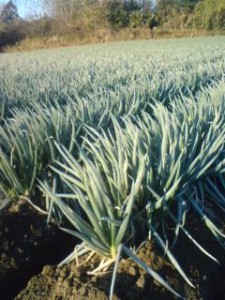 As with other vegetables long cultivated in Japan, many varieties have developed over the years. In fact, Western Japanese ( Kansai) cooking, which is usually more mildly flavored, traditionally requires a type of negi called a HANEGI ( 葉ネギ), of which the KUJO ( 九条)is a common variety. In Kanto style cooking ( like that around  this area), a type of stronger flavored negi called a NEFUKA NEGI ( 根深ネギ) is commonly used, with the varieties SENJU NEGI and SHIMONITA NEGI being popular. For a comparison look at the photos at this site: http://vegetable.alic.go.jp/panfu/negi/negi.htm

The Japanese ( and other Asians) have long recognized negi`s health promoting powers and this veggie does in fact contain good doses of carotene, vitamins c and k, calcium and allicin. 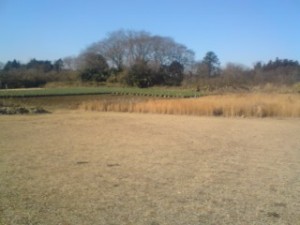 A green patch of negi in Tsukuba`s winter fields

The fact that negi has a strong smell has also been significant to its importance in Japan. This is because, strong smelling foods were believed to drive away evil forces and disease. That is why you will find, if you speak to many of Tsukuba`s older residents, that when they were young and felt they were coming down with a cold, their mothers not only put lots of extra negi in their miso soup, but also tied some grilled negi in a pouch around their necks!

Don’t let the cold. colorless landscape get you down. Keeps your eyes ( and noses) open for Tsukuba`s most important winter crop- NEGI- in the fields and on your plate!.