Manyoshu Poem Referring to Ancient Ceremony on the First Day of the Mouse (Hatsu Ne no Hi) sheds light on the origins of Mayudama Decorations – and the Okunitama Shrine’s Annual Plow Ceremony 13 January, 2021 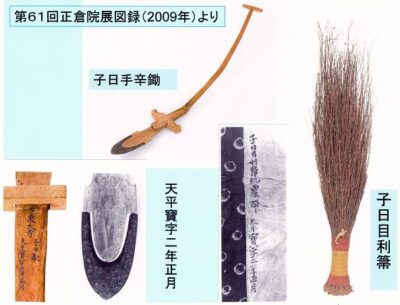 This poster from an exhibition of objects preserved at the Shosoin Imperial Treasure House shows the NE NO HI NO METOGI NO HO-KI (bottom right) which was used in the 8th century by the Japanese Empress to ritually brush the silkworm racks (as a prayer for abundant silk) on the First Day of the Mouse of the New Year – and the NE NO HI NO TEKARA SUKI (top center) a ritual plow used by the Emperor (on the same day) in a ceremony carried out as a prayer for a good rice harvest. On the same Day of the Mouse, courtiers would gather pine saplings ( a symbol of long life) and other young plants (in fields marked off by sacred SHIMENAWA ROPES) to make a special soup. 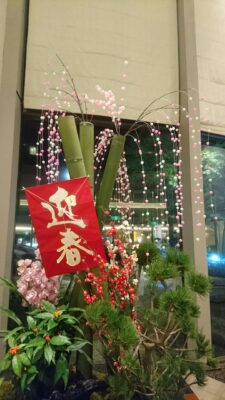 Mayudama beads on slender “branches” as part of a New Year’s decoration in Asakusa, Tokyo. They

In Japan it is quite common to receive new calendars as gifts at the end of the year (many companies distribute them for free as a promotional device or as a token of thanks for your patronage) and as usual I ended up with my fair-share of 2021 calendars, featuring either beautiful photographs or art-work or inspirational messages to accompany each month. Most of them had been passed on to me by Japanese friends and acquaintances who’d wanted to get rid of the ones they`d received and didn’t want, knowing that I’d probably be interested – especially if they were Japanese-themed.

Well, yesterday I was putting one of the more appealing ones up on my wall (one that provided all kinds of information on traditional customs ) and I noticed that it happened to be the Day of the Mouse. And since there are 12 animals in the Japanese Zodiac and it was still only January 11th, that meant that it had to be HATSU NE NO HI (初子の日) – The First Day of the Mouse of the New Year.

And though that might have meant nothing to the vast majority of people even here in Japan, those of us who enjoy and study the 8th century Manyoshu, the oldest collection of Japanese poetry (and what better time to lose oneself in the elegance of the Manyo Age (629-759 AD) than these insanely troubled days!), are familiar with the HATSU NE NO HI from one of its better known works, a curiosity-arousing TANKA by Otomo no Yakakmochi (cannonized as one of the 36 Immortals of Poetry).

What piques one’s interest in this short, difficult to translate work is: first, the mentioning of the First Day of the Mouse (Hatsu Ne No Hi) and then a reference to an archaic ritual instrument called a TAMABAHAKI (玉箒) – whose Chinese characters when directly translated mean: Beaded Broom. What makes it so difficult to translate (like so many other great poems) without losing most of what’s good about it in translation is Yakamochi’s use of double-meanings – with NE meaning both MOUSE and SOUND, and TAMA meaning both BEAD and SOUL/SPIRIT/ LIFE. The lively rhythm the poet creates, evoking the tinkling of the shaken broom is also something hard or impossible for a translator to duplicate.

It is prefaced by an introduction that tells us the poem was written after the Empress Koken had presented BEADED BROOMS to her courtiers on the 3rd day of the First Month in the year 758 AD – which was the First Day of the Mouse.

Which I translate (showing the double meanings) as:

Today, on the First Mouse/First Sound of the New Year, I take the Beaded Broom/Spirit Broom in my hand, and when I do, the strings of beads/strings of life make a sound that stirs and cleanses my soul (and gives me long life ) 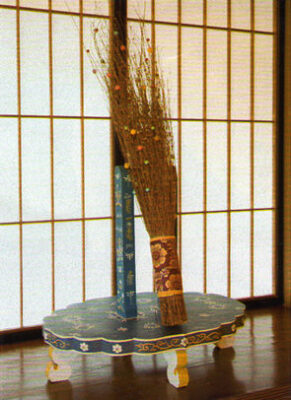 Amazingly (or so it seems to me), the same sort of ritual JEWELLED BROOM mentioned by Yakamochi has been preserved at the Shosoin Imperial Treasure House – two of them in fact!

Apparently, back in the 8th century, the First Day of the Mouse was a day for various observances and rituals meant to bestow good health and long life upon the participants – and abundant rice crops and silk throughout the realm. The Emperor would ritually plow a small rice field, while the Empress brush silkworm rack with a beaded broom (the beads no doubt representing cocoons). The Japanese Emperor and Empress still in fact perform these same rituals – though not on the First Day of the Mouse.

And these beaded brooms, in slightly altered forms can still be seen in many part of Japan during January. They are called Mayudama – Cocoon Beads and symbolize the desire for abundant silk(i.e prosperity) 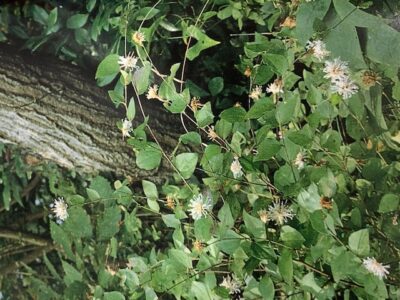 Koyabo-ki (Pertya scandens), the plant from which the TAMABAHAKI were made. Their present name derives from sacred Mt. Koya, where Kukai’s important Kongobuji Temple was built. Apparently, this plant was extensively cultivated there because it was forbidden, according to temple rules, to grow bamboo – which with so many possible uses was believed to pose to much of a temptation for the monks there. The dried koyabo-ki stems were used to make brooms.

Tamabahagi decorated with tiny beads – like the one presented to Otomo no Yakamochi by the Empress Koken on the First Day of the Mouse 758 AD.

And like me, you also might be interested in a rustic old festival that, in my mind, MUST have its roots in the rituals carried out by the aristocrats of the Imperial court more than 1,200 years ago. It is held at the foot of Mt. Tsukuba in Sakuragawa City (just north of Tsukuba City) on the 3rd day of the New Year (which was the Day of the Mouse back in the year 758 AD) and  is called the Kuwa Matsuri (plow festival). In it, the Shinto priest ritually plows the ground AND a pile of sakaki leaves * – as a prayer for abundant rice AND silk!

The shrine was founded… you guessed it – in the 8th century! Also interesting is the fact that the word TAMA, which plays a key role in Yakamochi’s poem is its name O-Kuni TAMA Jinja

*  The sakaki leaves piled up as they are in the shrine’s ritual look like the mulberry leaves essential for raising silkworms – and the name of the Festival KUWA MATSURI suggests the same. KUWA, 鍬 (plow) is a homophone for KUWA 桑 – mulberry!